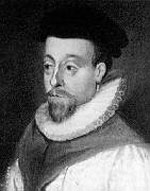 born: 1583
died: 5 June 1625
country: United Kingdom
Orlando Gibbons (1583–1625) is one of the giants of early church music. He sang in the choir of King’s College Cambridge, between 1596 and 1598 at the same time that his brother Edward was Master of the Choristers. He became a student at the University in 1599 and by 1603 was singing in the Chapel Royal during the reign of James I. In 1615 he was an organist there; by 1625 he had become the main organist (his assistant being Thomas Tomkins) and was listed as such at the funeral of James I in the same year. He was also noted as being organist at Westminster Abbey, having succeeded Robert Parsons in 1623.

On 1 May 1625 Charles I married Henrietta Maria by proxy – this had happened in Paris and the King had been in London. Once married, Henrietta set sail for England with four thousand courtiers and servants. Charles, not wishing to appear to meet her on anything less than an equal footing, moved his whole court to Canterbury where they were to meet. This included all the choir, vestments, books and ornaments from the Chapel Royal. Whilst waiting for Henrietta and Charles to arrive back from Dover, Gibbons died of an apoplectic seizure. His death is recorded in the Chapel Royal cheque-book as follows: ‘Mr Orlando Gibbons organist, died the 5th of June, being then Whitsunday at Canterbury, while the King was then to receive Queen Mary, who was then to come out of France and Thomas Warwick was sworn in his place organist the first day of July following’. Gibbons was buried in Canterbury Cathedral the next day. It was rumoured that he had died of the plague – a story denied by the doctors, but which was quite likely, the denial probably being to protect the retinue from desertion in the face of a major state event. 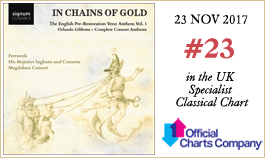