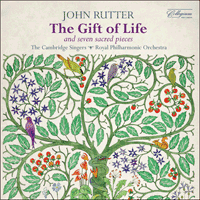 The Gift of Life & other sacred music

The Gift of Life, is a six-movement choral celebration of the living earth, of creation, and of life itself, offering a kaleidoscope of moods from contemplative and prayerful to majestic and inspirational.

'The music, in Rutter’s familiar style, loved by many but disliked by some traditionalists, could not be better performed' (MusicWeb International)» More

The Gift of Life
I wrote The Gift of Life early in 2015 as a result of a chance conversation at a choral convention in 2013 with an old friend, Terry Price. He was planning to retire from his position as Minister of Music at a church in Dallas, and his church wanted to give him an appropriate gift to mark his many years of service; I was already thinking I would like to write a fairly substantial new choral work with orchestra, and these two thoughts came together. Terry’s church immediately agreed that this new work would be the right gift, and a theme soon suggested itself: in 1985 I had written a Requiem—which, like any Requiem, inevitably reflects on death—why not write the opposite, a work celebrating life?

Unlike a Requiem, where a set form of words is laid down in Catholic liturgy, no framework exists for a celebration of life, and I had to choose (and in three cases, write) texts which were appropriate to a theme rarely expressed in music. The six movements of The Gift of Life reflect different facets of the miracles of creation and of life, and I was happy to be able to include as the third of them my Hymn to the Creator of Light, originally written in 1992 as an unaccompanied double-choir motet in memory of the composer Herbert Howells on the occasion of the dedication of his new memorial window in Gloucester Cathedral. I had always felt slightly wistful that this piece was somewhat of an orphan on its own, and here was an opportunity to give it a home as part of a larger work. I added a discreet orchestral accompaniment to enrich the texture and to make it more consistent with the other five movements.

Give the king thy judgements, O God
15 June 2015 marked the 800th anniversary of the signing of Magna Carta. The meadow by the River Thames at Runnymede was the scene of a colourful commemoration of this landmark event in the history of justice and freedom; HM The Queen, Prince Philip, Prince William, the Prime Minister, the Archbishop of Canterbury and numerous dignitaries were present. Music formed a part of the ceremony, and I was honoured to be invited to contribute an anthem for choir and orchestra to welcome the Queen and Prince Philip as they arrived. The prevailing mood of the piece is festive, but as a prayerful moment before the closing pages I incorporated Orlando Gibbons’s lovely hymn-tune Song 1, to new words expressing the theme of the occasion.

A flower remembered
The 2011 earthquake and tsunami followed by a nuclear accident at Fukushima in Japan was a terrible event which can never be forgotten. In particular, its victims deserve to be remembered, and every year on the anniversary of the disaster a concert is held in Japan honouring their memory. Harmony for Japan, the choral organization responsible for this concert and for many related humanitarian and charitable activities, asked me to write a piece for inclusion in the 2013 commemoration. My text for A flower remembered was freely inspired by the Japanese haiku tradition, but the music is fully western and my own.

The Quest
In June 2014 John Hughes, the gifted young clergyman who served as Dean of Chapel at Jesus College, Cambridge, was killed in a car accident. The sense of shock and loss felt by his family and friends was shared by his college, by Cambridge generally, and throughout the Anglican Church, where he had been very possibly destined for high office. At such times, it is my hope and belief that music can play a part in healing and consolation, a feeling shared by Mark Williams, the Director of Music at Jesus College, who invited me to write The Quest.

The piece is dedicated to the memory of John Hughes, and was first performed by the combined choirs of Jesus College at a memorial Evensong in their college chapel on 27 June 2015.

It was not the easiest of pieces to write. After much searching I found George MacDonald’s poem which seemed to express what we all felt, and I instantly knew that I wanted to juxtapose it with the In paradisum section of the age-old Burial Service. Oddly, once the texts were chosen, the music seemed to flow naturally from them, and the poignant voice of a solo oboe sprang into my head. I respectfully offer the piece to John’s family, friends and colleagues with the hope that they may find consolation in it.

Psalm 150
Pageantry and ceremonial have always played a role in the life of a nation, and I was fortunate as a young musician to have known and briefly worked with William Walton, the acknowledged master of music for such occasions. I never imagined that one day I would be invited to contribute a setting of Psalm 150 to an event for which Walton himself would surely have written something if he had still been with us—the Golden Jubilee Service for HM The Queen, held in St Paul’s Cathedral on 4 June 2002. Seizing the opportunity to make full use of this unique building, I asked for three choristers to be placed high in the dome, from which position they sang as a trio at key points in the music. The magical effect of hearing three treble voices singing in Christopher Wren’s dome is not easy to replicate anywhere else, but thanks to modern audio technology I think we have come close.

Christ is the morning star
I wrote this Advent carol in 2013 at the invitation of Graham Ross, Director of Music at Clare College, Cambridge. Regrettably, the season of Advent is often swallowed up by premature Christmas celebrations, and for the occasion of Clare’s annual Advent Carol Service I wanted to write a piece which would look forward to Christmas—and to the Second Coming, a significant Advent theme—rather than greet its arrival. The idea for the text came from an inscription of words by the Venerable Bede on the wall of Durham Cathedral: Christus est stella matutina, which, translated into English, is the first line of my carol.

All bells in paradise
Unlike other Cambridge collegiate choirs, which are on vacation in mid-December, King’s College Choir does sing at Christmas, and many carols have been composed for its renowned Festival of Nine Lessons and Carols held each Christmas Eve. All bells in paradise was written for the 2012 Festival, at the invitation of Stephen Cleobury, Director of Music at King’s. For this, the third carol I have written for them, I turned to a carol text more or less contemporary with King’s Chapel itself, All bells in paradise I heard them ring—this provided the first line of what was otherwise my own new text.

Rejoice and sing
While I was a student at Cambridge I got to know Sir David Willcocks, Director of King’s College Choir from 1958 to ’74. It was thanks to him that my first compositions were published—he served as editorial adviser to Oxford University Press and spotted my work early on, later inviting me to be his co-editor for the second and subsequent volumes of the Carols for Choirs series. He has been a staunch champion of my music ever since, and a mentor and inspiration to me and many other musicians over the years. In celebration of his 95th birthday in 2014 I was delighted to be asked by OUP to compose a new carol in his honour.

Writing Rejoice and sing I recalled the many happy Christmas concerts he conducted with the Bach Choir in London’s Royal Albert Hall, thinking also of his fondness for quirky rhythms—hence the lop-sided 7/8 which runs through much of the music.

This album presents eight of my recent choral works. The largest of these, The Gift of Life, is my first extended choral work since Mass of the Children (written over ten years ago), and it has been a pleasure to be able to record it less than three months after its premiere in April 2015. The other seven pieces have been written for a variety of occasions, private and public, which are detailed in the notes that follow. Five of these new pieces were originally written with accompaniments for organ or small-scale instrumental forces, but they are heard here in versions with orchestral accompaniment, some of which I scored specially for this recording. Christmas carols continue to feature in my output, and as a seasonal PS I have concluded our album with three new ones. As ever, a deep and grateful bow goes to my choir the Cambridge Singers and to the Royal Philharmonic Orchestra, my partners in many concerts and recordings in recent years.