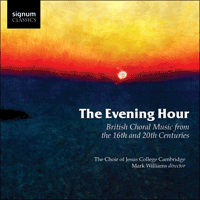 British choral music from the 16th and 20th centuries

The choir of Jesus College Cambridge contemplates the hours that take us from day into night in a programme of works by English composers from the sixteenth and twentieth centuries.

'An hour of exquisite singing … kick your shoes off, sit back and enjoy' (The Observer)» More

Philip Radcliffe (1905-86) spent nearly all of his life in Cambridge and, more specifically, in King’s College. A Classical scholar from 1924 to 1929, he was elected a Fellow in 1931. He became a University lecturer in music 1947, a role which he maintained for twenty-five years. Even long after retirement he continued to pursue the calling which meant most to him—that of teacher. Among his most distinguished writings are books on Beethoven’s String Quartets, Mendelssohn and the Grove article on Brahms, but he wrote widely on subjects ranging from Corelli to John Ireland. As a composer he concentrated mostly on small-scale pieces, his works reflecting his restrained and reflective nature. God be in my head is an 8-part setting of words from the Sarum Primer of 1558.

As a distinguished organist—of Wigan and Leeds Parish Churches, then of York Minster from 1913 until his death—Sir Edward Bairstow (1874-1946) made a notable contribution to the Anglican tradition. A typically outspoken Yorkshireman, he remained loyal to his roots, shunning an approach from Westminster Abbey in 1928, but nevertheless he was knighted in 1932. Bairstow was a gifted and dedicated teacher but he did compose a modest amount of church music of enduring quality, including about thirty anthems. Save us, O Lord is among the most popular of these. Composed for the Festival of the Wigan and District Church Choral Association, it dates from 1902, when he was organist of Wigan Parish Church.

Little is known about the life of John Sheppard (c1515-1558). It is believed that he was a St Paul’s Cathedral chorister around 1530 and from 1543 he served for a few years as Informator Choristarum at Magdalen College Oxford. Much of Sheppard’s music has been lost but his extant works are enough to distinguish him as one of the finest Tudor composers of church music. He composed three brief settings of In manus tuas (Jeremiah 14:9) to be sung at Compline during the days immediately preceding Holy Week. All three are based on the same chant. The first of these differs from Nos II and III in that Sheppard treats a larger proportion polyphonically and incorporates more imitation.

Sir Richard Rodney Bennett (1936-2012) was one of the most versatile composers of his generation, as comfortable with serialism (he spent two years studying with Boulez) as with his performances as a jazz pianist. He wrote three symphonies and six operas, concertos (for trumpet, for marimba, and—for Stan Getz—for tenor saxophone, timpani and strings), diverse chamber works and memorable scores for film and TV. This version of A Song at evening was commissioned by Jesus College, Cambridge in gratitude for the work of Robert Mair (Master of Jesus College) and his wife Margaret. The text is a composite of children’s prayers by Walter de la Mare, entitled Before Sleeping. Marked Andante tranquillo, this charming miniature represents just one facet of a man who has been described as “the complete musician”.

The brief Miserere mihi Domine by William Byrd (c1540-1623) is a double canon on a chant fragment which proceeds almost entirely by step. This creates contrapuntal difficulties which Byrd overcomes with supreme skill—so effortlessly that one is unaware of the technical mastery. The soprano sings only a portion of the chant, whereas the bass has the complete melody. The work was published in the Cantiones, quae ab argumento sacrae vocantur of 1575, three years after Byrd was appointed Gentleman of the Chapel Royal.

Gabriel Jackson (born in Bermuda in 1962) is best known for his substantial output of choral music, although more recently he has become equally preoccupied with instrumental works. He composed Creator of the stars of night in 2000. A setting of an anonymous 7th-century text, the work begins in contemplative mood. The middle section (with organ) is more dramatic and incisive, before a return to the opening mood. Commissioned by Matthew Owens for the Choir of St. Mary’s Episcopal Cathedral Edinburgh, the piece was premiered in December 2000.

In spite of its notable qualities of lucidity and craftsmanship, the music of Sir Lennox Berkeley (1903-89) is currently out of fashion. He composed operas, four symphonies, three string quartets and diverse other chamber works including a piece for double-bass and piano and a viola sonata, piano music and choral works. Family connections with France led to Berkeley himself making regular visits. When he approached Ravel with some of his scores, he suggested study with Nadia Boulanger. French and Stravinskian neo-classical influences led to a style very remote from the so-called “cow-pat” school of British music. Berkeley wrote his setting of The Lord is my shepherd, Opus 91, No 1 for the 900th anniversary of the foundation of Chichester Cathedral in 1975. It is dedicated to the Dean, the Very Reverend Walter Hussey, an outstanding patron of the arts.

Robert White (c1538-1574) was a contemporary of Byrd but died much younger. He succeeded Chritopher Tye as organist of Ely Cathedral. After a spell at Chester he became Master of the Choristers at Westminster Abbey. His Lenten Compline hymn Christe qui lux es et dies (his fourth setting of this text) follows the Tallis/Sheppard model in retaining the cantus firmus in either the treble or tenor line while the remaining voices provide the polyphonic interest.

Henry Balfour Gardiner (1877-1950) is fondly remembered as a great promoter of other English composers’ music. He gave generously of his time and his financial means. He was modest and self-critical regarding his own work, giving up composing entirely in 1925, yet there are some fine works, including Shepherd Fennel’s Dance for orchestra. Dating from 1908, his Evening Hymn, a spacious and harmonically rich setting in eight parts of Te lucis ante terminum (words attributed to St Ambrose of Milan) is a classic of English church music.

Orlando Gibbons (1583-1625) was the outstanding English composer of church music in the generation following William Byrd, but in his lifetime he was probably best known as a brilliant keyboard player. His anthems belong to either of the two types—the verse anthem (in which short choruses break up the solo passages into a succession of verses) and the full anthem (written for full choir). Setting words from Psalm 39, Gibbons composed Behold thou hast made my days in 1618 for the funeral of Anthony Maxey, Dean of Windsor. This is one of only three of his verse anthems employing a single solo voice, here alternating with the 5-part chorus.

The Evening Watch, Opus 43 No 1 by Gustav Holst (1874-1934) is based on A Dialogue by the metaphysical poet Henry Vaughan. Dating from 1924, this motet scored for two solo singers and 8-part chorus, is typical of Holst’s most pure and austere manner and harmonically is among his most forward-looking works. In the conversation between Body and Soul during the transition from wakefulness to sleep the chorus has the latter role, its passages written without bar-lines.

Sir William Harris (1883-1973) was a pupil of Charles Wood and Henry Walford Davies and went on to hold various positions as organist/music director, including New College, Oxford, Christ Church Cathedral, Oxford, and, for nearly thirty years, St. George’s Chapel, Windsor Castle. He composed few works, but among them is the anthem for double choir Bring us, O Lord God, a setting of a prayer by John Donne which Harris wrote in 1959 not long before he retired. This a masterly work from a distinguished choir trainer—demanding but equally rewarding.

The composer and organist John Blitheman (c1525-1591) is mentioned in the Fitzwilliam Virginal Book as William Blitheman but in the Chapel Royal records over a period of more than thirty years he is referred to as John. After serving as chaplain at Christ Church Oxford from 1555 he became Master of the Choristers there nine years later. In 1585 he succeeded Thomas Tallis as Organist of the Chapel Royal, where John Bull was among his pupils. Among Blitheman’s relatively few vocal works his In pace alternates choir (a descending phrase treated imitatively) with plainsong.

Composer and organist Philip Moore (born 1943) held assistant positions at Eton College and Canterbury Cathedral, before becoming Master of the Choristers and Organist at Guildford Cathedral in 1974. From 1983 until his retirement in 2008 he served as Organist and Master of the Music at York Minster. Moore has composed organ music and other instrumental works but his output is dominated by church music. His Evening prayers is the last of Three Prayers of Dietrich Bonhoeffer, commissioned in 1980 by Equinox, a newly formed vocal quartet. Bonhoeffer, a German pastor and theologian of saintly humility, was executed at Flossenbürg concentration camp in April 1945. The words are taken from Bonhoeffer’s Letters and Papers from Prison. Evening prayers reflects the importance of music in Bonhoeffer’s life, being based on the melody of one of his favourite hymns, the Advent chorale Nun komm der Heiden Heiland.

Miserere nostri by Thomas Tallis (c1505-1585) is a canonic setting of a text from Psalm 122, first appearing in the Cantiones sacrae of 1575 which Tallis and Byrd published together. In this compositional tour de force the most obvious canon is between the top two lines (singing the same melodic line half a bar apart) but simultaneously four other voices sing another melody (two of them in inversion) at four different speeds. The resulting work of art is both remarkably beautiful and thoroughly ingenious.

In his grandly impressive Blessèd city, heav’nly Salem Sir Edward Bairstow (1874-1946) incorporates the plainsong theme Urbs beata Jerusalem. (The text is taken from this plainsong hymn and another, Angularis fundamentum). The important organ part, reflecting Bairstow’s own long and distinguished association with the instrument, includes solo interludes, one of which builds to the big climax of the work. A subsequent passage for organ leads to the extended and peaceful final section.