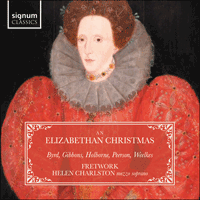 The Christmas season in Elizabethan times was so different to our current experience, despite some superficial similarities, that it’s difficult for us to put our mind in a such an alien context. For a start, the ‘season’ was strictly twelve days from Christmas Eve to Epiphany, or Twelfth Night: 24 December to 6 January. The idea that we might start preparing for the festival in October would have seemed distinctly strange.

And the tawdry round of consumerism that presages our own mid-winter festival was nowhere to be seen: Advent was a time of fasting rather than feasting; holding back until the damn burst. But feasting there was once Christmas itself arrived. Presents were given, though few by comparison with today’s gargantuan spend-fest.

Although there was much merry making, and plenty of eating and drinking, there was also a balancing attention to the religious event that was the centre of the festival. At court it was especially so during Elizabeth’s reign, in contrast to the rather more hedonistic celebrations of her father. The protestant religion had embedded a more sober and thoughtful atmosphere, and Elizabeth’s principal composer, though Catholic, caught the mood in three works published in two collections a year apart: Psalmes, Sonets, & songs of sadnes and pietie of 1588 and Songs of Sundrie Natures of 1589; then again in a later manuscript collected by a Catholic friend.

The first proved to be his biggest hit: Lulla, Lullaby, listed as a ‘song of sadnes and pietie’ in the publication, became one of Byrd’s most enduringly famous songs. Indeed, some fourteen years after its publication, Lord Worcester wrote, somewhat wearily, that although Irish tunes had become all the rage at court, ‘in winter Lullaby an owld song of Mr Birde wylbee more in request as I thinke’.

The 1588 publication was the first Byrd has essayed on his own, without his partner, friend and mentor, Thomas Tallis, who had died some three years previously. In it he aimed to please as many people as he could with a broad collection of music in five parts.

Here is his sales pitch from the ‘Epistle to the reader’:

Benigne Reader, heere is offered unto thy courteous acceptation, Musicke of sundry sorts, and to content divers humours. If thou bee disposed to pray, heere are Psalmes. If to bee merrie, heere are Sonets. If to lament for thy sins, heere are songs of sadnesse and Pietie. If thou delight in Musicke of great compass, heere are divers songs, which beeing originally made for Instruments to expresse the harmony, and one voyce to pronounce the dittie, are now framed in all parts for voyces to sing the same.

He had taken consort songs—a form he virtually created, in which a single voice is accompanied by four viols—and fitted the instrumental lines out with words, such that five voices could perform the work.

A year later more came with Songs of Sundrie Natures and two more Christmas pieces. From Virgin’s womb in the form of a consort song with a chorus of four voices—‘Rejoice with heart and voice in Christ his birth this day’; and then with An earthly tree in the form of a duet accompanied by four viols, followed again by a chorus, urging us to ‘cast off all doubtful care … To joyful news divine’.

Much later—in fact, after Elizabeth had died—comes the delightful Out of the orient, found in a collection of manuscripts by Edward Paston, fellow Catholic and friend of Byrd’s, whose home, Appleton Hall, is mentioned in another consort song in the same collection. The story of the appearance to the shepherds by the angel is told with fluid self-confidence and masterly control, leading up to the rustic bagpipes alluded to over the nonsense word ‘Falantidingdido’.

The Christmas festive season included the new year, so Byrd’s O God that guides the cheerful sun is part of the festivities and its thoroughly energetic counterpoint belies a 70-year-old composer. It appeared in the 1611 publication Psalms, Songs & Sonnets, which also contained two fantasias for viol consort, a genre that rarely made it into print.

Antony Holborne was thoroughly Elizabethan, being born probably shortly before she came to the throne and dying shortly before his Queen, in 1602. He described himself in both his publications as ‘gentleman and servant to her most excellent Majestie’. His two published works were The Cittharn Schoole, published in 1597 and Pavans, Galliards and other short aeirs both Grave and Light, in five parts for Viols, Violins, or other Musicall Winde Instruments in 1599. The dances on our disc are all Pavans, Galliards, Almains or Corantos given titles suggestive of the Christmas season.

Martin Peerson, while he was born in Elizabeth’s reign, outlived her by many years, making it through into the Commonwealth, and his first musical activities appeared after her death. Upon my lap my sovereign sits is his most celebrated work, and appeared in his 1620 publication Private Musicke, or The First Booke of Aryes. His extensive body of consort music was never published—along with almost all viol consort music of the period—but was evidently popular among viol players of the time. Most are in six parts, except for this one five-part work, earlier than the six-part pieces and in some ways more serious and more daring harmonically.

Orlando Gibbons was of a similar generation to Peerson, though his life was cut short by a brain tumour when he was 52. He had been a chorister at King’s College, Cambridge, joined the Chapel Royal in the year of the Queen’s death and was to remain in royal service for the rest of his life. He was particularly associated with the young Prince Henry’s musical establishment, together with Coprario, Ferrabosco and Lupo. Though he was famed as a keyboard virtuoso, he composed extensively for the viols and violins of the court, and the ‘dooble bass’ referred to was an exceptionally large viol, tuned a fourth below the standard bass. The many tempo and dynamic instructions—exceptional for the time—indicate it was more probably written for the professional musicians at court, rather than for aristocratic amateurs.

I think we would find an Elizabethan Christmas a rather austere season; certainly colder than we are used to and a shorter, more intense holiday period. But compensations were to be had in the beauty of the music, if we were lucky enough to be kicking our heels at the royal court. We are perhaps fortunate that these pieces have survived and so we can have the best of both worlds.