Any new release from the Takács Quartet promises to be something special, and November's magnificent Record of the Month—String Quartets by Felix and Fanny Mendelssohn—is no exception. In comparison to Felix's last and greatest quartet, often regarded as a requiem for his sister, the couplings appear scarcely less fine in the Takács' idiomatic interpretations: these are astonishing performances which fully recognize all three works' strength and seriousness of purpose. The flowering of Romanticism throughout the first half of the nineteenth century is also much in evidence in the Chopin Nocturnes, and Stephen Hough's glorious new set effortlessly captures the emotional and poetic radiance of works which increasingly transcend the modest domestic origins of the genre, culminating in the twin masterpieces of the final Op 62 set.

With Josquin's legacy, Owain Park and The Gesualdo Six bid farewell to the composer's quincentenary year. This is typically imaginative programming from the group; a selection of motets bringing together Josquin with his contemporaries, with luminous performances to match.

An occasional series dedicated to choice selections of our all-time favourite recordings—ones you might possibly have missed? This time: Piano Concertos by Rubinstein & Scharwenka from Marc-André Hamelin (‘Hamelin soars to ever new heights of virtuosity’—Gramophone), Sir James MacMillan's Tenebrae Responsories from Westminster Cathedral Choir (‘the performances throughout are outstanding, and beautifully recorded’—Gramophone), and Triodion & other choral works by Arvo Pärt from Polyphony and Stephen Layton (‘the choir's pursuit of perfection ideally complements the sheer beauty of the music’—Classic FM Magazine). If you don’t know them already, a track from each is included on our monthly sampler which is free to download.

La Serenissima and Adrian Chandler have long been champions of music from the byways of eighteenth-century Italy. Their new album on Signum—entitled 'Behind Closed Doors' as a nod to the tribulations of attempting to make an ensemble recording this last year—presents the entire first book of Giuseppe Antonio Brescianello's Opus 1 Concerti & Sinphonie along with a spirited overture suite.

Recorded for LSO Live in December 2018, almost three decades after the composer's own iconic recording of the work with the same orchestra, Marin Alsop leads the London Symphony Orchestra & Chorus and a stunning line-up of soloists in a new version of Leonard Bernstein's Candide—a riotously satirical operetta as tellingly non-PC now as was Voltaire's novella when covertly published in 1759.

New releases from Signum Classics this month bring us an album of Christmas Carols with The King's Singers—a frosty, moonlit, fireside Christmas distilled into twenty-five tracks—and An Elizabethan Christmas, an immaculately performed exploration by Fretwork and mezzo-soprano Helen Charlston of the altogether more introspective festive season to be found at the English court around the close of the sixteenth century. Finally, For the love of life is a new album of Alexander Chapman Campbell's gentle contemplations. 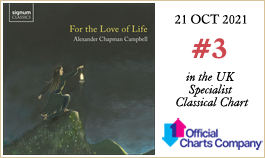 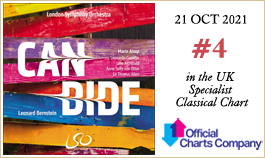 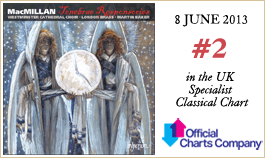