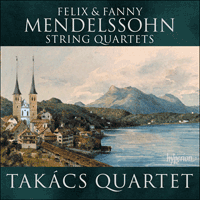 Felix’s impassioned F minor quartet was the fiercely personal response to his sister’s death in 1847, only a few months before his own. The Takács Quartet frames it with equally committed accounts of a much earlier work, and Fanny’s own important contribution to the genre.

Fanny Hensel (née Mendelssohn, 1805-1847) was the elder sister of Felix Mendelssohn Bartholdy by some three years, and, like him, a prolific composer and virtuoso pianist. But the combination of her gender and class precluded any viable option for her to pursue a professional career. In the conservative Prussian environment of the 1820s, women were not expected to rival their male counterparts in composition, and as a member of the upper stratum of Berlin society and as a lady of leisure, she was groomed to marry and to play the private role of a Hausfrau, rather than the public role of an internationally acclaimed celebrity such as her brother. (In 1829, she wed the court painter Wilhelm Hensel, and avoided public appearances as a pianist, finding her creative outlet instead in organizing biweekly concerts at the family’s Berlin residence, where she conducted a chorus from her piano so that she could perform choral works by J S Bach and concert versions of Gluck operas, as well as chamber music.) Nevertheless, Fanny Mendelssohn received, like her brother, a most rigorous musical education, which entailed weekly composition lessons with Carl Friedrich Zelter (director of the Berlin Singakademie), an immersion into the cerebral counterpoint of Bach (she composed dozens of now mostly lost fugues, and earned from her brother the Kosename of ‘Thomascantor’), and piano lessons with leading musicians of the time, including Ludwig Berger (a pupil of Muzio Clementi), Johann Nepomuk Hummel (a former wunderkind whom Mozart had taught gratis) and the amiable Bohemian Ignaz Moscheles (a confidant of Beethoven).

As a composer, Hensel excelled in writing Lieder (her brother judged several of her songs to rank with the exemplars of the repertoire), and miniature, lyrical piano pieces that she labelled Klavierlieder, counterparts to her brother’s Lieder ohne Worte. But her creative curiosity extended also to the larger forms, including the overture, cantata and chamber genres, the string quartet and piano trio among them. Her sole string quartet—at the time a rare venture by a female composer into that august, male-dominated genre—dates from 1834. It originated in some drafts for a piano sonata from 1829; exactly why she decided to recast the project as a quartet is not known. In the years since its completion, the composition has had a severely limited history. There is no evidence that it was ever performed during Hensel’s lifetime (she made no mention of it, for instance, in her diaries), and after her death it vanished into oblivion until a score and parts were finally released in 1988 by Breitkopf & Härtel, her brother’s principal publisher. During the past three decades the quartet has slowly but surely entered the repertoire, and it is now regarded—alongside Schubert’s final quartets, Felix Mendelssohn’s Opp 12 and 13 (the latter recorded here), and Robert Schumann’s three Op 41 quartets—as among the most imaginative and compelling reactions of a generation of Romantic composers who were the first to come to terms with the late style of Beethoven.

In four movements, Hensel’s work begins with a deeply expressive adagio ma non troppo that is formally free and tonally adventurous. Instead of a textbook sonata form, she opted to write what is more akin to a fantasy. For one, the music begins in C minor, away from the tonic E flat major, ultimately secured only in the closing section of the movement. Nevertheless, Hensel firmly grounded her work thematically and rhythmically by clearly alluding in the opening bars to two string quartets in the same key. First, she acknowledged her debt to Beethoven, by crafting the opening gesture of her first movement from that of his ‘Harp’ quartet, Op 74 (1809). And second, she nodded to the beginning of her brother’s Op 12 string quartet (1829), a work even more closely related to Beethoven’s precedent. There is yet one other reference in the first two bars, where Hensel appears to recall the opening motif of her brother’s ‘Calm Sea and Prosperous Voyage’ overture (‘Meeresstille und glückliche Fahrt’, 1828), transferred from the murky double bass of the concert overture to the first violin in the quartet.

The following scherzo in C minor has a slightly demonic quality about it, certainly relieved by the mock counterpoint of the contrasting trio in C major, yet another Beethovenian allusion, this one to the trio in the third movement of his fifth symphony. The deeply expressive romanze in G minor, which impresses as a poignant Lied ohne Worte, implies more than directly affirms its key with strong cadences—a degree of freedom that Hensel often sought in her music and that separated her style from her brother’s. Somewhat more conventional is the rondo finale (ABACABA), securely in E flat major and bringing the quartet, through its whirling perpetuum mobile figurations, to a brilliant close.

If Hensel produced only one string quartet, her brother was an accomplished violinist and violist who began writing string-quartet fugues as early as 1821, when he was twelve. His first completed string quartet in four movements dates from 1823, and concludes with a learned double fugue. Not so his first two quartets published in 1830: Op 12 in E flat major and Op 13 in A minor, composed in 1829 and 1827 respectively. Here one senses the young composer processing and interpreting the weighty impact of Beethoven’s quartets, including the Op 74 ‘Harp’ quartet, and, in the case of Op 13, the ‘Serioso’ quartet in F minor (Op 95), String Quartet in A minor (Op 132) and String Quartet in B flat major (Op 130). Fanny Hensel was of the opinion that, while in 1834 she had become stuck in Beethoven’s late style, her brother had already successfully assimilated it and progressed beyond it. She lamented what she perceived to be her own inability to ‘capture ideas properly to give them the necessary consistency’, so that ‘my longer projects expire in their youth from decrepitude’, while her Lieder, because of their compressed dimensions, suited her muse better.

There is, to be sure, a certain irony that Mendelssohn took considerable inspiration for his Op 13 from one of his own miniature Lieder, the love song ‘Frage’ (‘Ist es wahr?’, Op 9 No 1), which, he announced to his Swedish friend Adolf Lindblad, would serve as the overarching theme for the four movements, with explicit references in the outer movements and implicit reminiscences in the inner movements. The quartet begins by recalling the closing cadences of ‘Frage’ and its dotted rhythms. At the other end of the composition, the finale actually concludes by quoting a broad swathe of the Lied, thus directly relating the outer movements, bringing the Lied into clear focus, and moving the textless quartet ever so closer to the genre of the art song. As for the inner movements, the ingratiating intermezzo, which changes the 3/4 metre of ‘Frage’ to 2/4, delicately traces in its interior section the second phrase of the song. The heartfelt adagio betrays a kinship with the cavatina of Beethoven’s Op 130, and thus again presupposes a vocal model, as well as suggesting a rehearing of the late Beethoven.

The String Quartet in F minor, Op 80, dates from the closing months of Mendelssohn’s life in 1847; it was precipitated by the tragic death of his sister from a stroke on 14 May, as she was rehearsing her brother’s cantata Die erste Walpurgisnacht with her chorus in Berlin. When he received the news a few days later in Frankfurt, he collapsed in shock, then within days escaped with his family first to the Black Forest before departing for a longer sojourn of several months in Switzerland. Initially unable to compose, he sought comfort in painting landscapes, with one compelling view of Lucerne, in which Mendelssohn carefully positioned the covered Spreuer Bridge with its Totentanz (‘dance of death’) artworks so that it led across the lake directly to the dual-spired cathedral. When his musical inspiration returned, he poured his grief into his most dissonant and emotionally charged composition: his final string quartet, essentially completed by September 1847, though left for posthumous publication in 1850. Not long after returning to Leipzig in mid-September and making the difficult journey to Berlin to see his sister’s grave, Mendelssohn himself began suffering from a series of strokes, to which he succumbed on 4 November.

Throughout much of Op 80 Mendelssohn animates his requiem for his sister, as the work is often interpreted, with startling discontinuities and agitated clashes. Barely holding the whole together is motivic and thematic material that privileges the dissonant interval of the diminished fourth (A flat down to E natural, the leading note of the F minor home key), often associated with the stronger, deeper emotions. Of particular note is the jarring scherzo, which takes on a sinister, macabre quality through its driving syncopations and unrelenting chromaticism, perhaps fulfilling vicariously Mendelssohn’s earlier prediction in February 1847 that his sister would someday compose a ‘scherzo serioso’.

Only the adagio in A flat major offers some solace from the F minor tonality that dominates in the other three movements. In the adagio, Mendelssohn once again approaches the world of song, and the interior, private world of his sister’s musical genius.