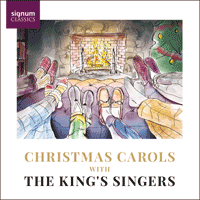 Christmas Carols with The King's Singers

If you are a singer of any kind—be that in a church choir, as a soloist, in a professional group, or if you simply like a singsong in the shower or after a glass of wine—the chances are that Christmas music is in your blood. Even if you’re not vocally-inclined, choral music still lies at the heart of many people’s Christmases. For the six of us, festive carols and songs are part of the soundtracks of our lives and have been since childhood. Christmases as a child were a time of magic and mystery: from the drama of the biblical nativity story, through to the excitement of Father Christmas’ visits and the excitement of hoping for snow in December, the season always seemed to hold a sense of wonder—and its music captures this unlike anything else can. In Christmas Carols with The King's Singers, we wanted to bottle that frosty, moonlit, fireside Christmas wonder and pour it into our sound.

This selection of music covers everything from contemporary choral gems and folk songs through to well-loved carols. Dotted throughout the album are several of the most famous English church carols, which take the six of us right back to our earliest singing days, and which also reflect our group’s heritage at King's College, Cambridge. These include Once in royal David’s city, Ding dong! merrily on high and O little town of Bethlehem. Less familiar perhaps, but also belonging to that great sacred choral canon are Tomás Luís de Victoria’s motet O magnum mysterium (O great mystery) and Tomorrow shall be my dancing day, which was composed by King’s College’s legendary Director of Music (and mentor to our forebears in The King’s Singers) Sir David Willcocks. We hope that these tracks will be known to many listeners, perhaps even well enough for you to join in! They also form the backbone to this album, which then draws in strands from lots of different parts of our library, all united by that magical atmosphere of festive wonder.

As well as Christmas music written for church services, it was important to us to capture a flavour of what we call ‘Christmas folk music’. These are songs based on the Christmas story, but whose origins are in traditional melodies passed down anonymously through folk traditions across the world. Many of these tracks were great arrangements already in our music library, such as the two Catalan folk songs, La filadora (The spinner) and Nit de vetlla (A night of watching), both arranged by Goff Richards. Also from our library came the English carol Gabriel’s message arranged by Edgar Pettman, and Gaudete, arranged by our founding bass Brian Kay. In other cases, such as the beautiful Italian carol Dormi, dormi (Sleep, sleep), arranged by Guy Turner, we have sought out newer arrangements to fit our forces perfectly, whilst maintaining all the character of the original song. Alongside these anonymous carols sit two ancient melodies with anonymous roots: Hodie Christus natus est (Christ is born today), and Qui creavit caelum (He by whom the heavens were made). Hodie is the Magnificat antiphon for Christmas Day in the Catholic plainchant tradition, and is famously included as the start and end of Benjamin Britten’s A Ceremony of Carols. The original plainchant melody first appears in a Swiss manuscript from c990AD, but it had likely been in circulation for a long time by then. Qui creavit caelum is a macaronic carol (using both Latin and English in alternation) that dates from the early 15th century in the Benedictine nunnery of St Mary, in the north-English city of Chester. We chose these ancient single-line melodies to offer some balance to the rich harmony in other tracks by more recent composers.

This third layer of works in Christmas Carols with The King’s Singers comprises compositions by British composers over the last 100 years, many of which have become fixtures of Christmas carol services around the world.

Our opening track, Balulalow, by the esteemed composer and conductor James Burton, sets a medieval English text, and was written whilst he was still a student at Cambridge University. Another former Cambridge student (and tenor in The King’s Singers from 1985 to 1997) is Bob Chilcott. His work, The Shepherd’s Carol, was written for the Choir of King’s College in 2001, and specially adapted for us in 2018. The quiet heart by June Collin—with words by James Morgan—has all the charm and immediate familiarity of a folk song, but was written in 1968 for musicians of the Salvation Army, with whom we have collaborated on numerous occasions. In the same kind of calming spirit as The quiet heart, O, do not move was written in 1990 by the British composer Sir John Tavener, and offers an unusual, eerier soundscape among some of the more luscious textures on the album. In Tavener’s own words, the piece is designed to create an atmosphere of ‘Quiet, with unearthly stillness’. Its text, by the Greek poet Giorgos Seferis, commands the listener with beautiful brevity and gravitas: ‘O, do not move; Listen, to the gentle beginning.’ From composers working earlier in the 20th century, we have included Ralph Vaughan Williams’ setting of the beautiful Wither’s Rocking Hymn and Michael Head’s famous song, The little road to Bethlehem—both adapted by members of the group to fit our unique forces.

The final layer of works in this collection is influenced by our travels around the world, and includes some of the most celebrated Christmas music to come out of Germany, Denmark, Sweden, and France. Both Brich an, o schönes Morgenlicht (Break, O beautiful morning light) by Johann Sebastian Bach, and L'adieu des Bergers (The Shepherd’s Farewell) by Hector Berlioz, come from large-scale oratorios—Weihnachtsoratorium and L’enfance du Christ respectively—but have taken on lives of their own as excerptible miniatures. We have taken two beautiful carols from the magical and frosty lands of Scandinavia. Inspired partly by a wonderful tour to Denmark shortly before pandemic hit in 2020, Julebudet til dem, der bygge (The Christmas message) is an old Danish carol with a beautiful lilting melody, arranged by a leading light in Danish choral music today, Bo Holten. From Sweden, Gustav Nordqvist’s Jul, jul, strålande jul (Christmas, Christmas, brilliant Christmas) captures some of the beauty of the Swedish Christmas tradition, part of which is the Sankta Lucia service which takes place in mid-December, illuminated solely by candles and celebrating light at a time of darkness. For choral singers, Pierre Villette’s Hymne à la Vièrge (Hymn to the Virgin) may well be familiar; it explores the line between the worlds of sacred choral music and jazz, pairing its lyrical melody with sumptuous harmonisations which reach their peak in the final few seconds. Our closing track, Fröhliche Weihnacht überall (Merry Christmas all around), also treads a fine line, pairing as it does a traditional German carol from the 19th century, with Matthias Bucher’s footloose bossa-nova-style arrangement and an orchestral flourish to finish. If the rest of this album evokes fireside warmth and nostalgia, we anticipate that Fröhliche Weihnacht überall might just evoke a bit of red and green tinsel and the explosion of crackers at an overladen Christmas dinner table.

Some of the inspiration for this album came from listening back through previous Christmas recordings by The King’s Singers and other artists. We wanted to work out what spoke to us most, and why. One recording to which we kept returning was the group’s 2003 album Christmas. We felt that it captured the intimate, acoustic sound of a live King’s Singers performance, and reflected the British choral heritage of our group perfectly in its repertoire. In some ways, Christmas Carols with The King’s Singers is a kind of homage to that album—a response from 17 years on and eight singers later. Another thing that helped inspire us while we were recording this music was a beautiful accident of the diary. With our concert calendar having been dramatically reshaped in 2020–21, we realised that—unlike many Christmas albums—we would be able to record this one in December, just before Christmas itself. So we decamped to the beautiful city of Wells in the west of England to record it over four days, and when we weren’t singing, we were able to take our lunch breaks at the city’s Christmas market, wander the beautiful Cathedral grounds in our scarves and coats, and fully embrace that same magical spirit which inspired the 25 tracks which make up Christmas Carols with The King’s Singers.