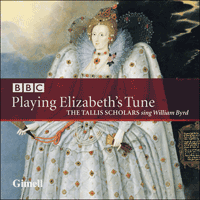 Filmed performances of sacred music by William Byrd together with a documentary on the troubled times that produced some of the most intimate and passionate sacred music ever written.

This DVD-Video has three sections:

Peter Phillips directs The Tallis Scholars in sacred music by William Byrd, filmed by candlelight in Tewkesbury Abbey. The playing time is 72'23.

Charles Hazlewood explores the life and music of William Byrd, Catholic Composer for a Protestant Queen, and the troubled times that produced some of the most intimate and passionate sacred music ever written. The playing time which includes excerpts from the filmed performances is 69'16.

Audio-only performances of William Byrd's Masses for five and three voices and his Tribue, Domine. The playing time is 51'41.

Playing Elizabeth's Tune, the television programme which The Tallis Scholars made for the BBC, explored the life and music of William Byrd, Catholic composer for a Protestant queen. In doing so it also illustrated the different styles which Byrd cultivated in his vocal music. This disc is a tribute to the all-round nature of his genius—to the kind of composer who could turn his hand to anything, and transform it.

Although Byrd was a genius to rival his teacher, Thomas Tallis, he was not required to write church music in quite so many styles as Tallis did - the political and religious situation in England in Byrd's lifetime was a little more settled. Nonetheless he had to face up to the same basic challenge as Tallis: to write music for the Protestant authorities when arguably his heart wasn't really in it; and to find opportunities to write the kind of music he really wanted to write—for the Catholic liturgy—and not be arrested for it. As in Tallis's time the compositional methods required for those two traditions were different. The Protestants wanted their music to have English words which could be heard, requiring a style which was simple enough to enable that to happen. The Catholic tradition, by this time fairly remote from Byrd, still favoured Latin texts and a style which in theory could be more elaborate. However in practice, as this disc shows, Byrd wrote quite simple music for the Catholics and, as in his Great Service, quite complex music for the Anglicans.

Most of the performances on this DVD are available for audio download. Please see CDGIM992 for tracks 1-12, CDGIM208 for the three- and five-part Masses, and CDGIM998 for Tribue, Domine.