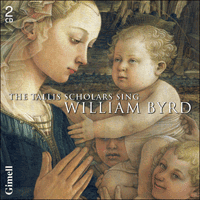 "England has never produced a greater composer than William Byrd. His music for the Anglican Church has been sung without interruption since the 16th century. In stark contrast his Catholic music was not heard for over 300 years. This specially priced selection of previously issued recordings compares the formal public style of Byrd's Anglican works like The Great Service with the plangent intimacy of his Masses and motets." (Peter Phillips)

England has never produced a greater composer than William Byrd. For range of expression he towered above his contemporaries, with only Tallis, already middle-aged when Byrd was born, in the same category of achievement. It stands to reason therefore that for a group such as The Tallis Scholars, dedicated to exploring Renaissance polyphony, Byrd’s music has been central. We have made two discs entirely devoted to him; included his Tribue, Domine on our Live in Oxford collection; included his Lullaby on our Christmas Carols and Motets anthology; and made a BBC TV programme exploring his life and work, recently released as a DVD-Video. His music has featured in over a third of our 1,500 concerts. This double CD has been put together from the best of our recordings.

Anyone listening to this survey of Byrd’s church music will be struck by the fundamental difference in outlook between his Protestant and his Catholic writing. The former has English words and a style which, at least in theory, was simple enough to ensure that those words could be heard; the latter has Latin words coupled to an elaborate compositional method which referred back to the kind of music the Reformation had hoped to put a stop to.

Although it is true that this division between simple and complex was not as firmly maintained by Byrd’s time as it has been in Tallis’s (Queen Elizabeth was less doctrinaire than her predecessors), it still explains why the two repertoires do not resemble each other. The message of the Latin-texted Masses, for example, seems to be directed inwards, towards contemplation through melody, suitable for a family circle; which contrasts with the manner of the Anglican Great Service, where the lines push outwards through studied declamation of the texts, suitable for performance before a big crowd.

The first disc in this set is devoted entirely to Byrd’s Catholic output, beginning with perhaps the most significant, and the most daring, pieces he ever wrote. Nothing is more essentially Catholic than settings of the Mass, a point which would not have been lost on Elizabeth I’s secret police, dedicated as they were to tracking down and harassing believers in the old religion. No one had set these texts in England since Queen Mary’s reign some decades before (and would not do so again for three hundred years), so Byrd’s trilogy stands isolated in time. But the really daring part of the story is that he published this music, admittedly in small volumes without title-pages, but with his name clearly given. Having taken such risks it is not surprising to find that the music itself is deeply expressive. The four-part Mass is perhaps the most personal as well as the earliest of the set, almost certainly written in 1592. It retains some techniques from the distant past, such as blurring the boundaries between the tenor and alto parts, yet there are moments of intensity – like the ‘dona nobis pacem’ – which Byrd never surpassed in all his later music. The three-part Mass seems to have come next, using just alto, tenor and bass voices, an unusually restricted ensemble even for someone who was writing for small recusant choirs. Clearly Byrd relished the technical challenge involved, while fulfilling the scheme of three-, four- and five-part settings. The five-part was written last, probably by 1595. It seems the most mature of the three, both in the confidence with which Byrd handled his texts and in remaining within ever more focused boundaries: the Kyrie and Gloria are shorter than in the four-part. But this concision means that when Byrd does repeat a word, as at ‘Agnus Dei’, the impact is unforgettable. Of the two motets which conclude the first disc Ave verum corpus belongs to the world of the Masses, having been published in the 1605 Gradualia but probably written in the 1590s. Like the Masses it was written for recusant choirs to sing, and similarly aims for deep expression of a fundamental text while creating a rapt, almost mystical atmosphere. Infelix ego, by contrast, is an earlier work which deliberately explores older techniques. Here Byrd is reaching back to the votive antiphon method of Taverner and Tallis, which he was too young to practise when it was standard. The long melodies, the duets and trios, and above all the use of the high treble voice, show him trying his hand at a great but lost art.

The second disc begins with three Catholic motets and an Anglican anthem which were included on the BBC television programme made in 2002 about Byrd’s life (which also includes a filmed version of the four-part Mass different from that included on disc 1). All three of the motets were published in Byrd’s 1589 Cantiones Sacrae, which indicates that they were written before he left the Queen’s service to live with his recusant community, and its few singers, in the countryside. These motets are written on a much grander scale than those on disc 1, probably for the much larger choir of the Chapel Royal, where Elizabeth allowed Latin to be used. Vigilate is an essay in madrigalian word-painting, one of the most exhilarating there is. Tristitia et anxietas and Ne irascaris, Domine are elaborately penitential pieces, both reckoned to be expressing a deep longing for the country to return to Catholicism but in sufficiently veiled terms for the court to be able to swallow it. There are passages in both these pieces which have become almost iconic in recent years, of which ‘Jerusalem desolata est’ at the end of Ne irascaris, Domine is perhaps the best known.

With Prevent us, O Lord we abruptly enter the world of Byrd’s Anglican music. Here is music which evidently has a functional purpose: to tie like-minded people together in unaffected, down-to-earth expressions of piety. So that the words may be heard, much of the writing is chordal. The mood is no longer mystical, nor nostalgic for a lost past. This analysis also holds for O Lord, make thy servant Elizabeth, ‘A prayer for the Queen’ as the manuscript source puts it. Affectionate and beautifully crafted, it lacks the one-to-one intimacy of the Masses.

This can also be said of the remaining pieces on disc 2. Even though they cultivate a more elaborated musical style, one has the feeling that O God, the proud are risen, Sing joyfully unto God and The Great Service are public gestures, built on the same principles of straightforward, non-tactile worship as the chordal prayers. In this company O God, the proud are risen is relatively little known, setting verses from Psalm 86: on stylistic grounds it may date from the late 1580s. Sing joyfully unto God, Byrd’s most popular anthem both in his lifetime and today, is a work of full maturity from the 1590s. However there is little even in this substantial work to prepare us for The Great Service, Byrd’s largest single composition.

This most impressive of all service settings thrills the listener as much by its rich scoring as by its sheer length or craftsmanship. Perhaps the first four of the six movements show Byrd coming to terms with his broad canvas, with his chosen ten voices (with no fewer than four altos) divided into two five-part choirs. But by the Magnificat the style is splendidly set, each section typically beginning with ‘Protestant’ chordal writing before shaking free into ever more intricate imitation. Every verse of these six movements is set with its own scoring and its own character: one which always sticks in my memory begins at ‘as he promised to our forefather Abraham’ in the Magnificat, wonderfully scored for AAATB.

Many people have said that Byrd did not really engage with these Anglican texts; yet he engaged with them enough for his English-language settings always to have found favour with the general public. No doubt he sympathized deeply with the Catholic texts at a personal level – he was a fervent believer – but such a reaction does not guarantee effective communication. Our ears are different from those of his original listeners. But one thing is certain: in these Anglican masterpieces he joined Tallis, Sheppard and eventually Weelkes, Gibbons and Tomkins in fashioning a new repertoire which has proved more durable and been more loved than anything else from the entire period.