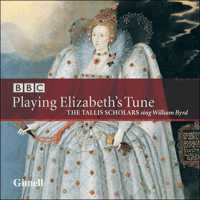 Peter Phillips directs The Tallis Scholars in sacred music by William Byrd, recorded while filming for the BBC in Tewkesbury Abbey.

Playing Elizabeth’s Tune, the television programme which The Tallis Scholars made for the BBC, explored the life and music of William Byrd, Catholic composer for a Protestant queen. In doing so it also illustrated the different styles which Byrd cultivated in his vocal music. This disc is a tribute to the all-round nature of his genius – to the kind of composer who could turn his hand to anything, and transform it.

Although Byrd was a genius to rival his teacher, Thomas Tallis, he was not required to write church music in quite so many styles as Tallis did – the political and religious situation in England in Byrd’s lifetime was a little more settled. Nonetheless he had to face up to the same basic challenge as Tallis: to write music for the Protestant authorities when arguably his heart wasn’t really in it; and to find opportunities to write the kind of music he really wanted to write – for the Catholic liturgy – and not be arrested for it. As in Tallis’s time the compositional methods required for those two traditions were different. The Protestants wanted their music to have English words which could be heard, requiring a style which was simple enough to enable that to happen. The Catholic tradition, by this time fairly remote from Byrd, still favoured Latin texts and a style which in theory could be more elaborate. However in practice, as this disc shows, Byrd wrote quite simple music for the Catholics and, as in his Great Service, quite complex music for the Anglicans.

The album opens with Vigilate, a favourite motet with singers and writers on Byrd’s music alike for its energy and madrigalian resourcefulness. Since it was first published in 1589 we may conclude that it was written in the first half of Byrd’s career, probably for the Chapel Royal to sing as a non-liturgical extra item at any service in Advent. Its Latin text and the outward-going nature of the music suggest that it did not come under direct Anglican influence, but anticipated a more courtly audience. The madrigalisms are expertly managed: the spirited ascending scale for the crowing cock at ‘an galli cantu’, the slowing down of the harmonic rhythm for the sleep-laden ‘dormientes’, the breath-taking speed of the imitation, amounting to a brief canon between soprano and second tenor, at ‘repente’ (one of the trickiest phrases to make cohere that I know).

This burst of excitement is followed by two of Byrd’s most sustained and penitential compositions: Tristitia et anxietas and Ne irascaris, Domine. Since both these were published in the same collection as Vigilate – the 1589 Cantiones sacrae – it is possible to draw some parallels between them. Like Vigilate they were composed before Byrd left the queen’s service and retired to the country to write the more intimate Latin-texted liturgical pieces of his Gradualia collections. Yet the sheer scale and intensity of these two masterpieces points to a man who had mastered his craft to a high degree. Most commentators agree that both express a deep longing for a return to Catholicism, but in sufficiently veiled terms for the court to have swallowed it. So Byrd turned away from outright anger, sublimating his feelings in more inward emotions, none more powerful than for the word ‘tristitia’ at the very outset of Tristitia et anxietas. Blatant madrigalisms of the kind found in Vigilate were not appropriate to such a mood, though moments like the gentle way the parts move at ‘consolare’ show Byrd approaching word-painting from a different angle. In Ne irascaris, Domine, in the famous second part known to many Anglican musicians under the title Bow thine ear, O Lord, the profound silence before ‘Sion deserta facta est’ contributes to one of the most haunting phrases of the period. This is then crowned by the extended passage for ‘Jerusalem desolata est’, surely a metaphor for the spiritual state of England as Byrd saw it if ever there was one.

These extended Latin-texted compositions are followed by some examples of Byrd’s stricter Protestant style. The three pieces chosen were in fact probably roughly contemporary with the three Latin items already discussed, perhaps written in the 1580s. But they seem to have been designed for more general use than just at court, even though one of them is specifically a prayer for the queen. Prevent us, O Lord and O Lord, make thy Servant Elizabeth have the following rubrics in their respective manuscript sources: ‘The Fourth Prayer after the Communion before the Blessing’ and ‘A prayer for the Queen’, which suggests they could have been sung by any choir whenever it seemed appropriate. Their style is relatively straightforward, conforming to the Protestant ideal that the words be in the vernacular and audible. To this end much of the writing is chordal. The same basic style in theory underlay the Magnificat from the Great Service, which, as much as the two prayers, would have been seen as a regular liturgical composition, performable at Evensong on any day of the week. Or it would have been if Byrd hadn’t taken the Anglican service style and made it more subtle and more elaborate than anyone before or after him. This is a tour de force of, at times, eight-part polyphony. It is sometimes said that Byrd’s heart was not really in his Anglican music, and certainly this Magnificat lacks the deep pathos of a motet like Tristitia et anxietas. But then there is no place for deep pathos in the service music of every day, and one might conclude, given the detail he lavished on this setting, that Byrd had nothing but the greatest respect for it.

Service music of an altogether different kind is to be heard in the Mass for four voices. Although the Mass is an everyday event for a devout Catholic, the musical context for this composition was most unusual. Since the authorities had done their best to close down the Catholic tradition in England there had not been an English setting of the Mass for some decades (nor were there to be for some centuries to come). Byrd was single-handedly keeping the flame burning, inventing the style as he went along. No wonder he put everything he had into it. In addition he was taking a risk in writing and publishing music to such texts at all, a fact he clearly recognized since the original part-books have no title-pages. The style he invented was intimate, Flemish in its consistent use of imitation between the voices, with a discourse hinting at an inward life which wraps the listener into itself. The most renowned passage comes on the final page, at the words ‘dona nobis pacem’; but in reality Byrd has been preparing us for this climax on every page.

Finally we come to a composition from the 1605 Gradualia, a set of liturgical settings which were amongst the last things Byrd wrote. The famous hymn to the Blessed Sacrament, customarily sung as a Communion motet, Ave verum corpus, has the same intensity of expression as the Mass for four voices, though its compositional style is even more direct. Here he took a leaf out of the Protestants’ book and set the words in chords, so that they may be heard. True, they are in Latin, but every Catholic knew the meaning of this text. The only slight elaboration in the music is at the words ‘miserere mei’, where there is some simple imitation between the voices and a beautiful semitonal clash in the harmony.

The music on this disc has shown that Byrd was capable both of great complexity and great simplicity; but for many people there is enough power in the Ave verum corpus for them to need nothing more.