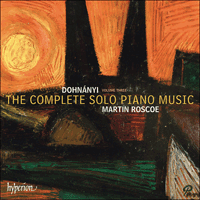 The penultimate volume in Hyperion’s four-part survey of the complete solo piano music of Ernő Dohnányi focuses on music from the period when the composer’s pre-eminent position was being assured. The titles of the largest works here, Ruralia hungarica and the Variations on a Hungarian Folksong, mask in their nationalistic ostentation the skill of a true master of piano composition.

Martin Roscoe inhabits the world of Dohnányi’s music like no other—appraisals of the earlier volumes attest to this—and this new recording is a joy.

‘The third volume of Martin Roscoe’s complete Dohnányi solo piano music cycle, and with a superb disc of the two piano concertos … there is a wealth of material to delight and consider’ (Gramophone)
‘It's an enormously attractive work, by turns exhilarating, as in the obsessive rhythms of the Presto second movement, and rhapsodic, as in the warmly atmospheric melismatic patterns of the Adagio sixth movement. Roscoe relishes these contrasts in mood with playing that is both exuberant and expressive’ (BBC Music Magazine)» More

‘Martin Roscoe captures every nuance with consummate virtuosity and a flair for negotiating the shifts in mood that characterise Dohnányi’s style. The interpretation is romantic but never overdone, painting in shades that one moment suggest drama, the next serenity. A fine performance of captivating music’ (Limelight, Australia)» More

‘Martin Roscoe's Dohnányi series on Hyperion is a remarkable venture, and one clearly born of love for this composer’ (International Piano)» More

This is the third recording in Martin Roscoe’s survey of the complete solo piano music of Ernő Dohnányi (1877–1960). The first volume features works spanning Dohnányi’s entire career, and the second focuses on an early period when he was still establishing himself within the great lineage of composer–pianists. The current volume includes pieces from the next phase in Dohnányi’s life, when he solidified his reputation among the finest musicians of his generation with professorships at two of Europe’s most prestigious conservatories.

After graduating in 1897 from the National Hungarian Royal Academy of Music in Budapest (now known as the Franz Liszt Academy), Dohnányi launched an impressive career as a touring virtuoso, appearing throughout Europe and the United States as a soloist, chamber musician and conductor. Dohnányi lived alternately in Budapest and Vienna, but spent his summers in Gmunden, Austria. There, he gave piano and composition lessons to his former schoolmate Béla Bartók and met the famous violinist Joseph Joachim, who invited Dohnányi to join the faculty of the Hochschule für Musik in Berlin. Dohnányi started teaching at the Hochschule in 1905, commanding the highest salary and becoming a professor within just three years.

After the beginning of World War I, Dohnányi moved back to Budapest, where he became Professor of Piano at the Liszt Academy in 1916 and the academy’s director in 1919. Shortly afterwards he was elected President–Conductor of the Budapest Philharmonic, a position that he would hold for the next twenty-five years. Dohnányi was dismissed from the Liszt Academy later that year by a new political regime, but he continued to compose and perform prolifically. Averaging 120 appearances a year, he became the leading provider of concerts in his nation’s capital. In 1920 Bartók wrote: ‘Musical life in Budapest today may be summed up in one name—Dohnányi.’

Several of Dohnányi’s compositions from the period following his return to Hungary in 1915 are nationalist works. These include his Pastorale on a Hungarian Christmas Song (volume 1), a collection of Hungarian folksongs for voice and piano, an opera based on a Hungarian legend (Ivas Turm, Op 30), and a Hungarian Festive Overture, Op 31. The most significant of the nationalist compositions from this period is Ruralia hungarica, Op 32a (1923–4), which consists of seven movements taken largely from the collection of 150 Hungarian Transylvanian folksongs that had recently been published by Béla Bartók and Zoltán Kodály. Dohnányi later arranged various movements of Ruralia hungarica for orchestra, for violin and piano, and for cello and piano, and even incorporated movements from the work into a ballet score.

The first movement of Ruralia hungarica is a simple minstrel’s song that is presented nine times in the same register, with the surrounding textures and harmonies growing increasingly complex with every repetition. The second movement is a spirited czárdás in rondo form that incorporates no fewer than four folksongs to create what Dohnányi once called ‘a vivacious folk-tune of diverting mood’. The third is a melancholy intermezzo that exudes, in Dohnányi’s words, the ‘rhythmic pungency and freedom of the Hungarian gypsy style’. The fourth movement is a rhythmically complex soldier’s song, while the fifth is a brief children’s game replete with ‘rustic simplicity, delicacy, and tenderness’. Based on the folksong ‘I am a motherless orphan’, the ‘passionate and brooding’ sixth movement includes an agitated middle section inspired by gypsy music that is the only material to appear in all four concert versions of Ruralia hungarica. The final movement is a sprightly ‘Italian tarantella’ based on a melody from Hungary’s ‘kuruc’ period in the seventeenth and eighteenth centuries.

While Ruralia hungarica may be Dohnányi’s most famous nationalist composition, his first work based on a traditional Hungarian melody is the Variations on a Hungarian Folksong, Op 29 (1917). In this work Dohnányi combined his newfound nationalism with his lifelong affinity for the theme-and-variations form. The theme is introduced in a very simple state, in unmetred block chords that are unadorned save for a few arpeggiated figures that terminate each of the folksong’s two halves. The first four variations alternate between slow and fast tempos, with the third variation imitating the Hungarian folk dulcimer known as the cimbalom. The tranquil fifth variation features an expansive, bell-like texture that requires both hands to play each of the bass and treble voices in order to fill out the rich harmonies. The sixth to the ninth variations gradually build up velocity and virtuosity back to the level of the fourth variation, before the work returns to a slow tempo one last time for the elaborately harmonized tenth variation. The work ends with a coda that returns to the serenity of the theme. The opening chords are replaced with even simpler octaves, with extended arpeggios at the ends of each phrase.

Although Dohnányi composed his Three Pieces, Op 23 (1912), before his return to Hungary, the work is sometimes mistakenly associated with his nationalist period because its final movement bears a striking resemblance to the Hungarian folksong ‘I would like to plough’. The first piece is a flowing, Schumannesque Aria, with arpeggiated triplet figures cascading from the cantabile melody. The second piece, Valse impromptu, is one of a number of Dohnányi’s compositions that were inspired by the waltz. Others waltzes in his output include the Valse aimable in Winterreigen, Op 13 (see volume 1) and a Waltz for piano duet, Op 3. There is even an entire suite of orchestral waltzes arranged for two pianists, Op 39a, one of which was arranged for solo piano. The waltz from the Three Pieces begins with the same first four notes that launched the Aria, converting them from a lyrical melody to the opening theme of a ternary waltz. The final piece is a dazzling Capriccio in A minor that Dohnányi often programmed at the end of his recital programmes. Fanciful works with this title have been around since the sixteenth century, but in the nineteenth century the genre became associated with rapid staccato figurations. Dohnányi continued this tradition not only in the last of these three pieces, but also in the concluding movements of his Four Piano Pieces, Op 2, and Six Concert Etudes, Op 28. In keeping with contemporary conventions, Dohnányi’s capriccios adopt not only the style but the ternary form of a scherzo. In the case of the Three Pieces, the opening and closing scherzo sections include references to the introductory motif from the first and second movements to unify the entire work.

The Gavotte and Musette dates back to 1898, but was not printed until 1905, the year Dohnányi moved to Berlin to begin his work at the Hochschule für Musik. The work shows the same fascination with pre-Classical dance genres that Dohnányi would later display in both his Humoresques in the form of a suite, Op 17, and his Suite in the olden style, Op 24. Like its Baroque model, Dohnányi’s Gavotte is a moderate dance in duple metre, with four-bar phrases that begin on the second half of the preceding bar. Dohnányi’s Musette also follows eighteenth-century conventions, with a drone in the bass that imitates the small French bagpipe that gave the dance genre its name. (Bartók would later use the same effect—using the same pitch as his drone—in the ‘Bagpipe’ movements of his Mikrokosmos and Petite suite.) Never one merely to copy pre-existing forms, Dohnányi expanded the simple binary structure of the Gavotte into a brief sonata form by recapitulating the two themes from the first section at the end of the movement. At the conclusion of the Musette, the Gavotte returns without repeats to give the entire piece the larger ternary form of a minuet and trio.

In addition to composing a number of original waltzes, Dohnányi arranged waltzes by other composers for concert performance. Volume 1 of this series concluded with Dohnányi’s concert arrangement of the Waltz from Léo Delibes’s ballet Coppélia, and volume 2 finished with a paraphrase of Schubert’s Valses nobles. This recording culminates with a paraphrase of a waltz from Delibes’s ballet La source (‘The spring’), known in German-speaking circles as Naila, as well as arrangements of two waltzes by Johann Strauss II.

Dohnányi’s Naila Waltz, from Delibes’s ballet La source, ou Naila, is based on a ‘Pas des fleurs’ that Delibes actually wrote as a divertissement for a ballet by another composer, one year after composing La source. The ‘Pas des fleurs’ was later incorporated into a production of La source and became one of the work’s most memorable numbers. As with his arrangements of the other waltzes, Dohnányi follows the basic form of Delibes’s original, but enhances the melodic and harmonic vocabulary by infusing his own distinctive voice as a master composer and virtuoso pianist. Dohnányi created the Naila paraphrase in 1897, shortly after graduating from the Academy of Music in Budapest. The work quickly became a staple of his repertoire as a concert finale, but he did not publish the work until 1916, when he joined the faculty of the Liszt Academy.

Dohnányi arranged the Two Waltzes of Johann Strauss in 1928, the year in which he gave the 1,500th concert of his career and returned to the Liszt Academy as a professor of piano. The first is an arrangement of Strauss’s Schatzwalzer (‘Treasure waltz’), which Strauss himself drew from themes from his Hungarian-inspired operetta Der Zigeunerbaron (‘The gypsy baron’). The second waltz is an arrangement of Strauss’s Du und Du (‘You and you’), based on themes from his popular operetta Die Fledermaus (‘The bat’). While Strauss’s original waltzes are mere piano reductions from his operatic scores, Dohnányi’s arrangements are extensive and inventive fantasies in the tradition of Franz Liszt’s virtuosic piano transcriptions.