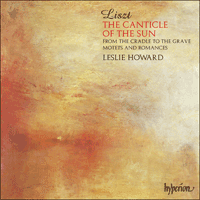 The complete music for solo piano, Vol. 25 - The Canticle of the Sun

This is a collection of piano rarities and recent discoveries, most of which have their origins in works which Liszt composed for other forces. But simply to apply the word ‘transcription’ to these pieces would not account for their genesis, nor their value in their own right. Liszt very often prepared his music for different forces simultaneously, and often on the same manuscript, only indicating occasional divergences. Elsewhere he would almost start the work afresh and only refer obliquely to an earlier version. The pieces in this collection represent a broad spectrum of this technique of adaptation, but they lend themselves to be gathered together in their depiction of the more sober and serious side of Liszt’s character, whether in sacred or secular mood.

Liszt had a deep spiritual affinity with the stories of his two patron saints—St Francis of Assisi and St Francis of Paola—and the two Légendes, whether in their piano or orchestral shape, are among Liszt’s best-loved works. The Fioretti (Little Flowers) of St Francis of Assisi was amongst Liszt’s favourite inspirational and devotional readings, and it is The Canticle of the Sun from that book which provides him with the text for the choral version of the Cantico del Sol. The first setting of the text (for baritone, ad lib male chorus and piano or organ) was made in 1862 but, although it was performed, has remained unpublished. The definitive version, with the accompaniment of orchestra or piano and organ, was completed by 1881 and published immediately, but the contemporary version for piano solo remained unpublished until the excellent Neue Liszt-Ausgabe printed it in 1983. In the piano version Liszt had abbreviated the title to Cantico di San Francesco, but the piece really deserves the same title as the cantata. The piece is partly based upon the familiar carol In dulci jubilo and is that rare thing amongst Liszt’s later works: a paean of joy.

San Francesco, although a straightforward enough piece, presents a conundrum as yet unsolved: it was composed for organ, with an alternative version for piano supplied alongside, to go with the organ and piano versions of Cantico del Sol. But the organ version of the latter piece has proved elusive, and yet the piano version has been known for some time. San Francesco presents some of the thematic material of the Cantico in rather a processional garb.

During his time at Weimar Liszt composed twelve symphonic poems which had an incalculable influence over the orchestral music of the later nineteenth and early twentieth centuries. After Weimar, Liszt no longer had an orchestra at his ready command, and that is at least one reason why his orchestral output is much slenderer in his final period. But at the time he was completing the Cantico he was working on a thirteenth and final symphonic poem whose subject was From the Cradle to the Grave, after a drawing by Mihály Zichy depicting three stages of existence: birth, the struggle for being, and death—the cradle of the life to come. Zichy’s actual title was Du berceau jusqu’au cercueil (‘From the Cradle to the Coffin’), which would not have suited Liszt’s philosophical purpose at all. The outer sections have much in common with the composer’s late introspective keyboard works, whilst the strivings of the middle section hark back to the earlier symphonic poems. The first part is very similar to the separately published Wiegenlied (recorded on Volume 11 of this series), and the final part combines themes from the previous two before disappearing in etherium. Unusually, Liszt drafted the work for piano, then arranged and amplified it for duet and for orchestra, and transferred later alterations back into the solo version. Equally unusually, he made very little effort to incorporate extra instrumental lines into the piano version but left them printed on an extra stave to be included at will. Such inclusion, as on the present recording, requires one or two small accommodations to be made in the main solo text, but to omit the extra voices would be to diminish a beautiful piece, especially as the fuller text is not unknown in its orchestral form.

At this remove it is impossible to know what Liszt had in mind when he indicated against certain keyboard works, or against keyboard parts in concerted works, ‘organ or harmonium’; or ‘harmonium or piano’, or again ‘organ or harmonium or piano’ and similarly impossible to know which if any of the three instruments might necessarily have been proscribed from participation. And it is easily possible, and, given the state of the average harmonium, surely preferable, to present all of the harmonium literature on the grand organ, with judicious choice of registration and use of the pedalboard, or, indeed upon the piano. As we know, Liszt owned several instruments which combined piano and harmonium in one, and there are some piano pieces where he might well have used both keyboards together, even though the rarity of the machine precluded his passing specific compositions for it down to us. What is clear, however, is that much of the harmonium music was conceived at such an instrument and is as readily performable on one keyboard instrument as on another. In one or two cases it seems clear that the indication ‘Ped.’ (or ‘con Ped.’ on a two-stave manuscript) might well refer to the piano’s sustaining pedal rather than to the occasional bass note wanting to be touched in by the pedals of the pipe organ. But since organists can be thankful for quite a large body of work from Liszt, it is to be hoped that they will not be discontented at the notion that some of the two-stave works might just as well be played on the piano.

Of course, Liszt made distinctly different piano versions of some of his bona fide organ compositions, but those do not concern us here. He also indicated the alternative of piano in many of his harmonium works, and many of these are to be found in Volumes 7 and 8 of the present series. The present selection virtually completes this branch of his activity (with the exception of the little cycle of three settings of the Ave Maria called Rosario which will appear in a future volume) by including the few works where the piano was not specifically mentioned. Alternative readings of the O sacrum convivium (just as in the choral and organ versions), the Zwei Kirchenhymnen, as the choral motets Salve Regina and Ave maris stella were called in the first organ edition of 1880, the Gebet which later found its way into the Missa pro organo and the almost Mozartean Ora pro nobis (which despite its title and liturgical implications does not seem ever to have been accompanied with a text) form a very attractive little addition to the repertoire which one hopes will not be begrudged. (The Gebet is not the same work as the similarly titled organ version of an Ave Maria, S20/2, and the Ave maris stella is a different version of the melody of S506—see Volume 7—in 6/4 time.)

The organists may have to concede Resignazione to the pianists. The previously known version, just one page long, has been in the repertoire of both instruments simply because there is no indication on the manuscript of Liszt’s requirements beyond a two-stave reading instrument. Now a more elaborate second version of the work has been published for the first time in 1992 from a hitherto unknown manuscript (in the Pierpont Morgan Library), and the piano is unequivocally stipulated. What is a strange and unfulfilled page of wistfulness (see Volume 11) is extended into a substantial and conclusive poem. So this is no transcription but really a new original composition. (The title, one supposes, is what Liszt thought was correct Italian for what is generally rendered Rassegnazione; his meaning is clear enough.)

Finally, this recorded recital remains in the secular world for a group of piano pieces based upon Liszt’s own songs—transcriptions which fall outside the better-known collections such as the Liebesträume, the Bücher der Lieder (see Volume 19) or the Sonetti di Petrarca (Volume 21). Il m’aimait tant, which tells of the grief of love lost after a broken tryst, was one of Liszt’s most successful early songs, and the piano version has been reprinted many times, whereas the Romance of 1848 was not published until 1908 and not reprinted until the Liszt Society edition in 1978. The song of 1843 upon which it is quite loosely based—Ô pourquoi donc (Les pleures des femmes), ‘Let not earthly laughter deride the heavenly tears shed by loving women’—is also a rarity, last reprinted in the 1989 Journal of the Liszt Society. The piece is extraordinary for its fluctuations between E major and E minor which were unaccountably discarded in the more familiar recollection of the piece in Liszt’s later Romance oubliée (see Volumes 11 and 23).

The piano version of Ich liebe dich, with Rückert’s text (‘I love you, since I must, since I cannot otherwise …’) overlaid, remained unpublished until very recently although it may have been prepared for publication at the same time as the song (1860). It is one of Liszt’s freshest and simplest utterances.

Die Zelle in Nonnenwerth was something of an obsession with Liszt. At the last count, beginning around 1841 and continuing until the last years of his life, he seems to have made three versions of the song to Lichnowsky’s poem about the cloisters on the island in the Rhine, an Élegie with a different text over the same music, four versions of it for solo piano, the second of these with an alternative reading effectively making version number five, just one version for piano duet, and versions for violin or cello and piano, most of which can be readily run to ground today by the diligent collector. The present piano version is the last, and the simple song has become a nostalgic reflection upon happier times and gives rise to the speculation that, in old age, Liszt mused upon one of the happiest periods of his life when he and the Countess d’Agoult holidayed on the island of Nonnenwerth with their children Blandine, Cosima and Daniel in the summers of 1841–43—some of the terribly few occasions when that extraordinary family was united.