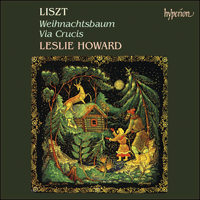 The complete music for solo piano, Vol. 8 - Weihnachtsbaum & Via Crucis

Cover artwork: … the cat sprang up to the roof. She seemed to say something to Silver Hoof. Russian Folk Art

‘This CD was a revelation—this is great music played with impeccable artistry and flawlessly recorded, one of the best solo piano records I've heard in the past ten years’ (CDReview)
‘This pianist seems absolutely in key with Liszt's own musicianship’ (Musical Opinion)

Although all of the pieces recorded here come from Liszt’s later period, and whilst most of them use the piano in a very restrained way, there could scarcely be a greater contrast in atmosphere between the Christmas Tree suite and the sombre Stations of the Cross. Of course there is the obvious contrast between the birth and the death of Jesus, but Liszt moves to the extremes of musical expression between almost secular lighthearted gaiety in some of the Christmas pieces to a relentless sense of horror and distress in the Passiontide pieces.

The Christmas Tree suite occupied Liszt for quite some time—he was determined to make an especially good job of it to present to his granddaughter Daniela (daughter of Hans von Bülow and Cosima) to whom the set is dedicated—and he also made a charming arrangement of it for piano duet. The bulk of the work was carried out between 1874 and 1876, although Liszt kept touching the pieces up until the time of publication. The first four numbers are marked ‘piano ossia armonium’, and are nowadays additionally included with Liszt’s organ music. The whole work is arranged in three groups of four pieces which, broadly, present traditional carol melodies, a child’s view of Christmas, and a maturer person’s recollections.

Michael Praetorius (1571–1621) composed the choral work which provides the theme for Psallite, or, at least, the central section—Liszt provides a formal march-like introduction and coda, setting a processional air. O Heilige Nacht! is based on an old carol, and Liszt also produced a version of the piece for choir and organ. The melody of Die Hirten … is known to practically everyone, but Liszt’s delicate left-hand pastoral dactyls are one of his happiest inspirations. His treatment of what all English-speaking people will immediately recognize as O come, all ye faithful as a march for the three kings (which has no connection with the eponymous march in Liszt’s oratorio Christus) allows him to introduce some rather dramatic extensions to the well-known tune.

The fifth piece is one of very few scherzi that Liszt wrote—full of humour, and treacherously difficult as children’s pieces go! The double notes of Carillon—the first of two bell-pieces—are similarly unnerving, as is the unresolved ending. The seventh piece is worlds away from Liszt’s independent Berceuse. Here, a very simple melodic fragment with a rippling accompaniment makes several dreamlike excursions into strange harmonic territory before it drifts off into sleep. No 8 actually includes two old French carols, and makes another rather sophisticated little scherzo which leads us to the adult world of the last pieces.

The bells of the ninth piece invoke quiet recollection and, according to Humphrey Searle, the tenth piece—at once wistful and impassioned—is a nostalgic remembrance of the first meeting between Liszt and the Princess zu Sayn-Wittgenstein; the eleventh—a stirring march—a self-portrait, and the twelfth—an exuberant mazurka—a portrait of the Polish Princess. This may be so, although the present writer can find no primary source for Searle’s idea. It should be observed, though, that the Hungarian piece bears an extra dedication to Liszt’s friend, the composer Kornél Ábrányi, and that the extrovert gaiety of the final number belies everything that one has otherwise been lead to believe of the character of the Princess, who smoked cigars, wrote interminable tomes on obscure church problems, and probably never danced a step!

The little Weihnachtslied is included as a postscript: Liszt made two different settings of the words of this carol, and one of those he produced in three different choral versions as well as the piano version recorded here.

Liszt’s late masterpiece Via Crucis exists in versions for choir and organ, for choir and piano, for organ solo, for piano solo, and for piano duet. All of these versions were intended to be published at the same time, shortly after Liszt completed them in 1879, having first thought of the work almost a decade previously, and having revised the root-version—the choral/organ one—in the meantime, noting that the corrections had to be incorprated into the other versions. The publishers rejected the piece—along with two other late choral pieces, Septem sacramenta and Rosario—on account of the severity and modernity of its musical language one might just about understand, but it seems to have been dismissed as musically incompetent!

Liszt seems to have imagined a procession around a church, stopping at each of the paintings or sculptures that so often depict the fourteen Stations of the Cross, and singing at each one—along with some kind of portative harmonium! It is safe to assume that all modern day performances of the work, which was rescued for performance only in 1929, and whose piano version was published for the first time in 1980 in the excellent New Liszt Edition, are performed without procession. However, the piece opens with a processional hymn, Vexilla regis, which Liszt made use of in three different compositions—the present work, the extended piano piece, and the short chorale (see below). The first three notes of this melody became a particularly beloved motif for Liszt in his later compositions, where it is always used to represent the Cross, as, for example, in the Crusaders’ March in St Elizabeth. Liszt begins with a short introduction on this motif before setting the hymn.

The first Station, Jesus is condemned to death, is a rather violent piece, mostly in octaves, and not based on any external source material. The second, Jesus is made to carry his cross, is punctuated by a short phrase of plainsong to the words ‘Ave Crux’, and ends with a passage which depicts slow walking. The third, Jesus falls for the first time, begins with the rough expression of ‘Jesus cadit’ and resolves into the first verse of the plainsong hymn ‘Stabat mater dolorosa’. The fourth, Jesus meets his Blessed mother, has a harmonic language that anticipates Messaien by over half a century. The melody which ends this piece, somehow reminding us of love in the midst of sorrow, will recur at the end of the work. The fifth, Simon the Cyrenian helps Jesus to carry his cross, also brings the solace of affection, and ends with the same music as does the second Station. The sixth, Saint Veronica, adds a short introduction and coda to a harmonization of the famous chorale usually translated as ‘O sacred head sore wounded’, and familiar to us especially from Bach, although actually the original work of Hans Leo Hassler (1564–1612).

Station VII, Jesus falls for the second time, is a slightly altered repetition of Station III, a semitone higher. The eighth Station, The women of Jerusalem, is one of the most idiomatic musical descriptions of weeping in the whole literature. After the first climax is a short monody with an inscription from St Luke: ‘Weep not for me, but for yourselves, and for your children.’ The final bleak marching passage indicates the last part of the road to Calvary. The ninth, Jesus falls a third time, moves the earlier music up another semitone, with minor alterations. The tenth, Jesus is deprived of his clothing, is another original piece with striking chromatic harmony far ahead of its time. Liszt’s remark to himself at the end of the manuscript (‘Durch Mitleid wissend’) comes from the libretto of the as yet unfinished Parsifal, and possibly indicates Liszt’s own awareness of how he discovered his forward-looking musical language through wisdom which came of compassion. There is certainly no question of Wagner’s music being quoted. Station XI, Jesus is nailed to the cross, reiterates the cry ‘Crucifige’ in a phrase of deliberate brutality. The twelfth, Jesus dies on the cross, is an extended piece, with two of the Last Words: ‘Eli, Eli lama Sabacthani?’ and ‘In manus tuas commendo spiritum meum’. A musical meditation on the three-note motif also takes in the last Word: ‘Consummatum est’ and the piece concludes with a harmonization and extension of the chorale O Traurigkeit, o Herzeleid! whose harmony is at once simple and daringly dissonant. Desolate is the only appropriate adjective for the thirteenth Station, Jesus is taken down from the cross—fragments of the ‘Stabat Mater’ and a varied version of the fourth Station trail away into silence. The final Station, Jesus is laid in the tomb, returns to the hymn of the opening procession, continuing from the text ‘Ave crux spes unica’, with a calming rhythmic accompaniment in 3/2 before the most delicate coda upon the melody from the fourth Station and the three-note ‘Cross’ motif bring the work to a close.

The piano versions of eleven of the twelve Chorales, better known, at least in catalogues, for they are never performed, as choral works, were also published for the first time in the New Liszt Edition in 1980. They are obviously intended for private performance and represent the simplest piano-writing to come from Liszt’s pen. As so often in these circumstances, Liszt has supplied copious fingering! In private, one may repeat the music as many times as the verses of the hymn allow. Here, only the structural repeated sections of chorale melodies are observed, in numbers 7 and 11. It will be seen immediately that the music to the sixth and eighth chorales is identical with the equivalent movements in Via Crucis—and it is not clear which version came first, although the introductions and codas seem to indicate that these chorales, at least, succeeded the longer work. Some of these chorales are Lutheran, others based on plainsong. The New Liszt Edition gives a thorough outline of the sources of melodies and texts for those interested. There is no clear order of these pieces in the sources, so the NLE presents them in alphabetical order, which is adopted on this recording. The titles may be translated: Hail blessed Cross; Jesus Christ (The five wounds); My soul doth magnify the Lord; Now thank we all our God; Now all the woods are silent; O sacred head sore wounded; O Lamb of God; O Sadness (on Good Friday); The Royal banners (a different setting from the one in Via Crucis); What God does is done well (different from the version in the ‘Weinen, Klagen’ Variations) and If thou but suffer God to guide thee. There are many instances of very personal harmonic colourings in Liszt’s versions—from which many a hymn book might benefit!

Cover artwork: … the cat sprang up to the roof. She seemed to say something to Silver Hoof. Russian Folk Art