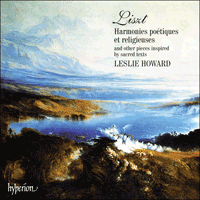 ‘Howard, catching the authentic tinge of hysteria, mounts swiftly upwards in an ecstasy that burns away awareness of mere notes’ (Classic CD)

The abbé Liszt has always been a familiar figure. Even though Liszt took only the four minor orders in 1865, and thus never became a priest (although he was later made Canon of Albano), his preoccupation with religious thought actually goes right back to his teenage years in Paris, and the subsequent friendship with some of the important religious writers of the day. The contradictions between Liszt’s perceived lifestyle and his devout intentions were a regular subject for speculation and even ridicule, but any proper investigation of Liszt’s life and letters reveals a deeply thoughtful and complex man, whose religious sensibilities must be taken absolutely seriously. His efforts to produce a new and viable language for church music, incorporating the language of the music drama, earned him as many enemies as friends, but the actual range of style of his religious music encompasses everything from the dramatic gesture to a return to an austere simplicity echoing a much earlier age. The piano works of a religious character show the same variety, and a good few of them are transcriptions of his own choral pieces. Much of this music has been completely neglected, even to the point of not being published until a century after the composer’s death, and in this respect the choral versions have suffered worse than the piano pieces. Recent revivals of some of the large-scale choral works may hint at a change in favour, and perhaps some of the rarer pieces in this collection will eventually join the repertoire alongside the two undisputed masterpieces: Bénédiction de Dieu dans la solitude and Funérailles.

Liszt made several settings of all or part of the Ave Maria, and all six piano works of this title are included here. Fortunately, they are each in a different key, which helps with identification! The E major piece is not connected with a vocal work, and, although the rhythm fits the opening of the text the ecclestiastical connection remains general. The subtitle ‘The Bells of Rome’ may not be Liszt’s, but the bell effects are specifically indicated. The piece was composed for the piano method of Lebert and Stark. The Ave Maria (d’Arcadelt) was issued with the Alleluia, although the key is really the only thing the pieces share. The Alleluia is based on material from the choral work Cantico del sol di San Francesco d’Assisi, whilst the Ave Maria is Jacques Arcadelt (c1505–1568) twice removed. Louis Dietsch (1808–1865) produced the piece in 1842 as an Arcadelt discovery, but was subsequently shown to have adapted the text of the Ave Maria to Arcadelt’s three-voice chanson ‘Nous voyons que les hommes’. Liszt added the rocking accompaniment in his transcriptions for piano and for organ. The D major Ave Maria was one of nine motets issued in 1871. This transcription (also the one for organ) is very straightforward, but the D flat version is extended with a florid variation. The tiny G major piece is adapted from a late vocal work, and the B flat version in the Harmonies poétiques is adapted from Liszt’s first choral setting of the text.

The Ave maris stella exists in three vocal and two instrumental versions, and the text is laid out above the latter. The piano version is quite elaborately coloured compared to the choral original, but the mood remains restrained.

Lamartine’s volume of poetry entitled Harmonies poétiques et religieuses inspired fourteen piano pieces by Liszt. The early piece of that title, although later repudiated by Liszt as ‘tronquée et fautive’, remains an astonishingly avant-garde work from a young composer known for competent juvenilia and several brilliant fantasies. Dedicated to Lamartine, the piece begins with no time- or key-signature, marked ‘senza tempo’, to be played with ennui, and develops into a musically wild elaboration of the two ideas heard at the outset. Rhythmic complications prompted Liszt to write in counting numbers within the bars which are basically in 7/4, and there are later regular subdivisions of five notes to the beat. The final section seems more conventional in that a tonality is finally reached, along with time- and key-signatures, but all is dispelled by the desperate outburst at the end. The trailing away into unresolving silence is so characteristic of Liszt’s last years that it is all the more astonishing to find it in a work composed when he was twenty-two.

Three completed pieces failed to be included in the definitive set of ten Harmonies poétiques contained in the collection dedicated to Jeanne Elisabeth Carolyne (the Princess zu Sayn-Wittgenstein). The first version of Invocation has many things in common with its more fully worked-out successor, but its mood is rather less jubilant, and the two Hymnes are relatively slight works beside the larger pieces of the collection. These pieces remained unpublished until the excellent New Liszt Edition produced them in 1981.

The collection itself divides broadly into two types of work: a simple style deriving from a choral original, and large-scale romantic poems of abundant inspiration. Critics have been rather unkind about the success of the mixture as a whole, but the very incongruity is an essential aspect of Liszt’s character, and the lesser pieces are certainly helped by being heard in context. As well as the Ave Maria, the Pater noster and the Hymne de l’Enfant were original choral pieces by Liszt. The Miserere was noted down by Liszt as a work of Palestrina which he heard performed in the Sistine Chapel. However, Palestrina has absolutely nothing to do with the odd melody of the motet which Liszt has collected and elaborated with tremolo and arpeggio variations. Another choral sketch is the basis for the second part of Pensée des morts. This piece is the reworking of the first part of the earlier Harmonies poétiques along with material from a sketched setting of the psalm ‘De profundis’, whose musical make-up is very similar to that of a long almost-complete work for piano and orchestra of the same title from 1834–5.

Several of the pieces are prefaced by stanzas from Lamartine’s poems, whence some of the titles derive. The Invocation is at once a prayer and a triumphant cry of faith, and, like many of Liszt’s works of this kind, is cast in E major.

Bénédiction de Dieu is the largest and finest piece of the set, and the added-sixth harmonies in F sharp major look forward to the religiously inspired music of Messiaen. The central Andante is perfect in its simplicity and reserve, and another delicate theme—sostenuto—precedes the return of the main material. Both secondary themes return in the gentle coda. Funérailles is subtitled ‘October 1849’. Many silly suggestions have been put about as to its inspiration—none less accurate than the notion that the piece is in memory of Chopin and that the tremendous galloping left-hand octaves in the middle section derive from Chopin’s A flat Polonaise. Many of Liszt’s acquaintances died in the mass execution at the hands of the Austrian court of Hungarian prime minister Batthyany and sixteen of his officers on 6 October 1849, in the aftermath of the failure of the 1848–9 revolution in Hungary. Although the ninth piece in the set is known only by its tempo direction, the poem which inspired it is entitled ‘Une larme ou consolation’, and that sets the tone for this inexplicably neglected piece, very tightly constructed, whose greatness is perhaps occluded by its sheer delicacy. Cantique d’amour returns to the tonality and warmth of the Invocation, but on a more intimate footing—an effort, perhaps, to ally love of God to human affection.

In domum Domini ibimus and O Roma nobilis are both straight transcriptions of choral pieces, as is Slavimo slavno Slaveni! (a play on Old Slavonic words, roughly meaning ‘Slavs let us praise the glorious Slavs!’)—a hymn in honour of the millenium of the arrival in Moravia of Saints Kyril and Mefodi. L’Hymne du Pape appeared in versions for piano and organ, and was later transformed into the mighty ‘Tu es Petrus’ movement of the oratorio Christus. A version with voices and organ entitled ‘Dall’ alma Roma’, written, like the present version, in honour of Pope Pius IX, remains in rather chaotic manuscript. A pity, because it would surely have been taken up as a national hymn in Italy, whose present national anthem is among the least musically distinguished in the world!

In festo transfigurationis and Sancta Dorothea are both original piano works of Liszt’s final period, dignified and musically forward-looking. The Benedictus and Offertorium are from the once-popular Hungarian Coronation Mass and exist in a variety of transcribed versions: for piano, for organ, for violin and piano, for violin and organ, and for piano duet. The Benedictus was also published in a version for violin and orchestra. Here Liszt incorporated Hungarian musical inflections into a setting of the ordinary, and the resulting Mass is well overdue for revival. The date of the Stabat Mater is uncertain, but must postdate Liszt’s arrangements of the ‘Cujus animam’ from Rossini’s Stabat Mater, since it includes material from the introduction to that piece, as introduction and bridge passage in the present piece, which otherwise elaborates the Gregorian chant of this text, set in thirds, as it is in Christus and in the much later Via Crucis. The piano piece has nothing else in common with these later works, however, being in a more simple variation form rather akin to that of the Miserere in the Harmonies poétiques.

Urbi et orbi remained unpublished until 1978. An intonation—the Pope’s blessing—alternates with a hymn melody in a piece which becomes very florid before returning to a declamatory coda punctuated by a short litany, set on a single stave as if to be sung by priest and people. Venantius Fortunatus’s hymn Vexilla regis prodeunt introduces Via Crucis, but in the earlier piano work upon the same theme, which also exists for orchestra, the procession is not that of the Via Dolorosa, but a real crusaders’ march, full of power and vigour, with just one gentler variation before the coda. Vexilla regis prodeunt, too, remained unpublished until 1978.