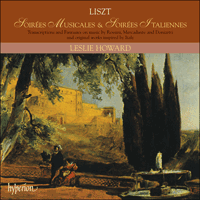 Ferenc Liszt’s years of travel took him very often to Italy in the mid-1830s, and his response to the country and its music was a vast body of works, original and transcribed. His fantasies and transcriptions from Italian opera and song are complemented by original settings of Italian texts and many pieces inspired by Italian scenery or works of art and literature. So considerable is this body of work, and so deeply has Liszt imbibed the Italian spirit, that it would not be unreasonable to describe these works in toto as the greatest of nineteenth-century Italian keyboard music. It may even be that the very existence of Liszt’s Italian works daunted the native Italian composers, whose instrumental music of the time, with the honourable exceptions of Verdi’s mighty String Quartet and Rossini’s inexplicably neglected piano works, seldom rises above the second rank.

Italian opera played a large role in the shaping of Liszt’s melodic style, as we can observe in his youthful opera Don Sanche, the Opus 6 Études for piano, and the earliest of his songs. His operatic paraphrases pay homage to Bellini, Donizetti, Mercadante, Pacini, Rossini and Verdi, and the many other Italian transcriptions salute Bellini, Bononcini, Donizetti (and his brother Giuseppe), Lassus, Mercadante, Paganini, Palestrina, Peruchini, Pezzini, Rossini, Spontini, Tirindelli and Verdi, as well as folk melody—anonymous or the product of minor salon composers. Bocella and Petrarch were chosen for song texts, and the words of St Francis of Assisi led to the Cantico del Sol. The art of Dante, Michelangelo, Orcagna, Raphael, Salvator Rosa and Tasso inspired important orchestral and keyboard works. The praise of Venice, Naples and Rome is sung over and again, and to all this must be added the catalogue of works which revere the Italian saints and the Church of Rome, which reverence is at the very root of Liszt’s psyche. And, of course, Liszt spent a great deal of his later life in Italy, and might even be regarded as an Italian composer manqué were it not that similar cases can be made for him in respect of France, Germany and Hungary.

The works in the present collection are of three kinds: transcriptions from the liriche da camera of three famous Italians; original works derived from Liszt’s own songs; and free fantasies on melodies from a variety of sources.

Rossini’s Soirées musicales are a collection of vocal solos and duets with piano accompaniment to texts of Metastasio and Pepoli. From their publication in 1835 they immediately became concert favourites, and Liszt’s transcriptions are only some of the many that circulated widely throughout the nineteenth century. And their influence lingered into the twentieth century and the works of such composers as Britten and Respighi. For some reason, Liszt completely re-ordered the collection when he made his transcriptions, retaining only the first and last pieces in their original places. (Rossini’s original running order is 1, 5, 7, 11, 3, 6, 4, 9, 2, 8, 10 and 12.) Liszt’s method in his transcriptions is akin to that which he employed in his Lieder transcriptions: the original piano part is wedded to the vocal part(s) and further elaborated from time to time, but the shape of the original determines the form of the transcription. But many repeated passages are subject to a fecund variety of treatment—yet more examples of Liszt’s personal approach to variation technique. Strangely, these works are at present very difficult to acquire in score, and the most recent publications are full of errors: the Ricordi edition of ‘La Danza’ only retains misprints from their first edition over 150 years ago, and Schott’s edition was bowdlerised by Karl Klindworth who, apart from making suggestions for study, advised many alterations to Liszt’s text. The present recording was made from a collation of the original editions of Troupenas, Ricordi and Schott, with reference to the first edition of Rossini’s original.

Whilst the subtitles go a good way to explain the content and style of the numbers in the collection, it should be noted that ‘Notturno’ bears no relationship to ‘Nocturne’ as used by Field or Chopin, but rather refers to a piece of music for evening use or with a nocturnal subject—there is nothing contemplative about ‘La regata veneziana’. Points of interest include: in No 1 a lovely bit of rhythmic complication where the left hand plays 7 against the 6/8 metre while the right hand plays six semiquavers and two duplet crotchets; in No 2 the wickedly brisk arpeggio ornaments; in No 3 the technical audacity of the second verse; in No 4 the delicacy of the emroidered accompaniment; in No 5 the crossed-hands effects; in Nos 6 and 7 the reticence to embroider at all; in No 8 the richness of the texture; in No 9, the sheer bravado; the magical cadenza in No 10; the roistering of No 11; and the expansive scope of No 12, which is practically a miniature symphonic poem in its depiction of the watching hours at sea through a storm.

The prolific Saverio Mercadante (1795–1870) was a composer of a similar mould to Rossini, although rather fewer of his works have stood the test of time, being not so strong on personality as those of his great compatriot. But occasionally one of the sixty or so operas is given (Liszt wrote a fantasy which included themes from Il giuramento) and a few instrumental pieces remain on the fringe of the repertoire. With the Soirées italiennes Liszt was not so generous as he had been with the Rossini collection, which he had transcribed in its entirety. He chose just half of the twelve numbers (on texts by Crescini and Pepoli) that make up Mercadante’s original, and successfully managed to select the pieces which differ as widely as possible from their pretty obvious Rossini models. Unfortunately, Liszt’s transcriptions are somewhat rare nowadays, probably because they are unrestrained in their technical demands—even the gentler pieces have fiendishly intricate details which render them immediately beyond the salon performer. Liszt’s method is of the same stamp as with the Rossini pieces, and the transcriptions themselves, depicting in turn the spring, a gallop, a Swiss shepherd, a sailor’s serenade, a drinking song and a Spanish gypsy girl, require no further gloss.

Again, the Nuits d’été à Pausilippe—a collection of twelve songs and notturni from which Liszt selected three—is a further extension to the same literature, and was even reissued with the present extended titles to conform with the earlier ones, and renumbered as a continuing series after the Mercadante set. Depicting summer nights in Posilippo—which these days is not quite the balmy resort of former times and threatens to be engulfed in Neapolitan suburbia—Liszt’s three pieces continue to find more variety in these essentially simple portraits of things Italian: the boatman, the breath of the beloved, and the tower of Biasone (which ends with one of Donizetti’s most disarmingly addictive tunes). And even though we may not quite take Sir Sacheverell Sitwell’s assessment of them as jewels in Liszt’s crown comparable with the Sonata and the Faust Symphony, they are certainly worth more than their present neglect might suggest.

Three of Petrarch’s cycle of sonnets hymning the poet’s love for the divine Laura occupied Liszt’s imagination over many decades. The best known of the works to result from this preoccupation is the second of the three piano pieces which bear Petrarch’s name in the Deuxième Année de pèlerinage. The three sonnets were first set as songs for high voice and piano in 1838/9. (In fact they really call for a lyrical tenor who can fearlessly cope with the ossia passages and negotiate a high D flat—the present writer will never forget the impression these songs made when stupendously sung by Adrian Thompson at the Hugo Wolf Academy in Stuttgart.) The piano transcriptions, which reverse the order of the first and second songs, may have been made soon after, but at any rate were complete by 1846 and published in that year. The transcriptions were revised for the Deuxième Année by 1855, and the songs were totally recomposed for low voice—and very miserable they became in tone—in 1861 (retaining the order of the piano versions). Since the later piano versions are familiar, the divergencies between these and the early piano versions will be readily audible, especially the long introduction to the second piece in the first version. But since, as with the Liebesträume, the sense of the poetry remains crucial to the understanding of the music, Petrarch’s original sonnets are given here, with translations.

By around 1840 Liszt had already sent the first collection of piano pieces entitled Venezia e Napoli to the printers, and a proof copy had been despatched, when he must have decided not to proceed with the publication—we know not why. In 1859 he revised the last two numbers of the set and inserted a short new piece to make up the second collection under this title, which was issued as a supplement to the Deuxième Année and which has always been enormously popular. The original versions make very interesting listening, even though it might be argued that trills inside tenths make gondoliering difficult or that there are almost too many steps to the bar in this particular tarantella. The second piece is curious. Its two unrelated themes are probably folkish in origin, but are neither of them so sufficiently distinguished as to be identifiable, as far as the present writer is aware. The first piece is of a greater order altogether. Liszt may already have seen its orchestral possibilities when he withdrew it as a piano piece, and certainly all those who know the symphonic poem Tasso—Lamento e Trionfo, which came to its final fruition in 1854, will have no trouble in recognizing this gondolier’s song. But the piano piece is imposing in itself and might well be performed independently of the other slighter pieces, charming though they be.

This exploration of the Italian Liszt comes full circle with the two fantasies on themes from the Soirées musicales, which actually antedate the transcriptions of the whole set. It will also be clear to the listener that the subtitles tell only part of the story, for other themes from the collection also become involved. True, large portions of these fantasies were able to be taken over into the transcriptions, although not always in the same key, but there is an opportunity for creating a dramatic structure in these two pieces which presents the Rossini works in a very different light, and invites comparison with Liszt’s early operatic paraphrases.