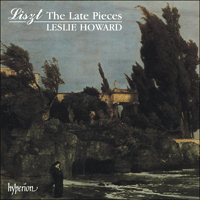 The complete music for solo piano, Vol. 11 - The Late Pieces

‘This, at last, is the comprehensive collection of late Liszt for which we've waited’ (Fanfare, USA)
‘Howard's performances are quite marvellous: scrupulously prepared and enlightened by this performer's high degree of spontaneity. Hyperion's recording captures every nuance’ (CDReview)

Liszt's third period' may be said to begin with his departure from Weimar, and especially with his retirement to Rome in the middle 1860s. From this point to the end of his life his music contains a great deal of introspection and almost a disregard of the likely fate of many of the works, only a few of which were performed and published in his lifetime. Orchestral works are rare, and the choral works after the completion of Christus tend to be on a small scale without orchestral accompaniment. The songs and piano pieces become starker, and the textures become leaner, even in the few ‘public’ pieces like the later Mephisto Waltzes and Rhapsodies. Leaving aside the late dances, the religious pieces and the great collections (the third Année de pèlerinage, the Christmas Tree suite and the Historical Hungarian Portraits), the present recording brings together all of the late character pieces for piano, as well as the piano versions of late works which also exist in other forms.

This is an altogether astounding body of work from an indefatigable imagination, in its way comparable to the late Beethoven Quartets or Bach’s Musical Offering and The Art of Fugue. The psychiatrist Anthony Storr, in his book The School of Genius, writes: ‘The old often show less interest in interpersonal relationships, are more content to be alone, and become more preoccupied with their own, internal concerns … this change … can be most clearly seen in the productions of those who have left behind a series of works of abiding interest.’ Storr rightly defines the first period of an artist’s life as a training time, the second as the advent of mastery and individuality, often combined with a need for a wide public, and the third as ‘a time when communication with others tends to be replaced by works depending more upon solitary meditation’.

It has long been recognized that, in his last years, Liszt grappled with a great many ideas about the possible future that music might take, even prefiguring the destruction of the Romanticism of which he was so much a part. He often anticipated Debussy, Scriabin, Schoenberg and Bartók in just the same way that his younger self had been such an important precursor of the harmonic and motivic techniques of Wagner. There is nothing experimental about this music, whatever a number of commentators have suggested; the breakdown of tonality, the openness of the form, the avant-garde harmonies, the avoided comfortable cadences and the trailings away into silence are the products of intense care. Even little album-leaves take on the characteristics of a new order of musical thinking. Whether the mood is nostalgic, miserable, unworldly, elegiac or even patriotic, the old language no longer serves. And the old virtuosity is almost completely absent: the musical demands far outstrip the purely technical ones.

Antonia Raab, who died in 1902, was a pupil of Liszt, and her poetry which inspired Schlaflos! (‘Sleepless!—Question and Answer’) has not come down to us. But it is easy to imagine the thought behind this miniature, where the tossing and turning is resolved by a simple transformation of the theme and the arrival of tonality which brings rest. Liszt offers some alternative passages in the piece, so two versions are recorded here. The first is the main text, where sleep is a distant silence; the second has a shorter, more frenetic questioning, and a safer resolution, almost like snoring!

Trübe Wolken (‘Grey Clouds’), or Nuages gris as it is more popularly known, drew admiration from Debussy and Stravinsky for its simple perfection. The ostensible key—G minor—is strained by dissonance, first growling then lyrical, not at all resolved by the enigmatic cadence.

Recueillement (‘Recollection’)—a gift to the Italian composer Lauro Rossi—weaves arpeggios around a rising scale before settling into very simple, chordal writing, with frequent reminders of the keynote C sharp.

The Toccata is an extraordinary little study, unusual among the late pieces for its prestissimo tempo direction and the ambiguous ‘white-note’ flavour to the harmony before the parallel chromatic movement of the closing passage.

Resignazione may be an organ work. It was written on a blank page after an organ piece and no instrument is specified, so pianists and organists both have shown interest in this tiny fragment which dies away without any hint of ‘resignation’ at all!

Wiegenlied (‘Cradle Song’) turns up in several places: for the unlikely combination of four violins (entitled Die Wiege), as the opening section of the last symphonic poem From the Cradle to the Grave, and as this delicate piano work composed for Liszt’s pupil and secretary Arthur Friedheim.

Unstern! (‘Unlucky’, or ‘Evil Star’) contains some brutally unfriendly harmony, with its open tritones, whole-tone harmony, augmented triads over a pedal and violent dissonance before the organ-like closing section brings a measure of peace, if no final balm. Small wonder that Liszt spoke of his musical language not being understood in his lifetime!

While a sense of humour is apparent in a good deal of Liszt’s music, at least within the bounds of scherzando, and often with a Mephistophelean edge, actual joking in his music is pretty well absent, save the one piece inspired by the sight of the corpulent Madame Pelet-Narbonne taking her pleasure in a ride on a roundabout. It must be admitted that Liszt’s view of the incident is less than kind—with the marking ‘Allegro intrepido’, and sounding not far away from the spirit of Bartók’s Allegro barbaro.

The hapless Mme P-N was a friend of Olga von Meyendorff with whom Liszt kept up a lively and copious correspondence and for whom he wrote a number of pieces, including the five album-leaves which have been misleadingly published as if they form some kind of a cycle, whereas they were composed over many years and are quite independent from each other. They are models of simplicity, the second piece deriving from the second of the Liebesträume, and only the more extended fifth piece having a title, Sospiri! (‘Sighs!’).

The other untitled piece in F sharp was found amongst Liszt’s manuscripts after his death and we know absolutely nothing about its provenance. It certainly contains much more of Liszt’s earlier style, with its fulsome melodic arch and parallel thirds, but yet with many a hint of music like the later Impromptu or the Valses oubliées.

The Romance oubliée resulted from a publisher’s request to be permitted to reprint an earlier Romance, itself a transcription of Liszt’s little-known song Ô pourquoi donc. Liszt turned down the request and sent instead a refashioning of the material—now a nostalgic glance at times past, in the same spirit as his four Valses oubliées—in four versions: for viola, violin or cello and piano, as well as for solo piano.

There are four pieces associated with the death of Wagner, the contemporary composer whom Liszt admired above all others, despite the sometimes serious difficulties in their personal relationship. Liszt stayed with Wagner at the Palazzo Vendramin on the Grand Canal at the end of 1882, where he had a premonition that Wagner would die in Venice, and that, therefore, his body would be carried by a funeral gondola. The music which he wrote (La lugubre gondola is usually the preferred title) is a transformation of the shape of a barcarolle, with harmony so original that the sense of tragedy is exceptionally desolate. Liszt later revised and extended the work, altering the metre from 6/8 to 4/4, without losing either the rocking of the boat or the plainting of the melodic line, but the second version is painted in more powerful colours than the first (Liszt also produced versions for violin or cello and piano). The comfortless piece which Liszt composed upon hearing that Wagner had died, R W—Venezia, is almost as violent as Unstern! but for the obvious reason of personal anguish. The deliberate echoes of Wagnerian grandeur are destroyed in a great dissonant cry. A little later, on the day that would have been Wagner’s seventieth birthday, Liszt composed the tiny elegy At Richard Wagner’s Grave, which he opens with the theme of Excelsior!, the first part of his choral work The Bells of Strasbourg Cathedral which Wagner had used to open Parsifal. Turning the compliment about, Liszt’s piece ends with a hushed recollection of the bell motif from Wagner’s opera. This piece, which also exists for organ or for string quartet and harp, remained unpublished for decades.

Somewhat apart from the other pieces are the gentle setting of a Russian folksong, ‘Farewell’ (no doubt supplied to Liszt by the dedicatee, his pupil Aleksandr Ziloti) and the piano piece derived from one of Liszt’s recitations for speaker and piano, The Blind Singer, based on a poem by Alexey Tolstoy and much tightened up in the process of eliminating the text (thirty verses of it)—a ballad of hunting Boyars and the counsels of a blind poet’s song.

The remaining pieces all have Hungarian connections. Hungary’s God exists in many versions, but was originally a song with chorus and piano, as was the Song to the Hungarian King. The Epithalam (‘Wedding Song’) was written for the marriage of the violinist Reményi, for whom Liszt drafted his unfinished violin concerto, and was also published for violin and piano. Mosonyi’s Funeral Procession and In Memory of Petöfi were both later incorporated in an altered form into the Historical Hungarian Portraits, as was a shortened version of the Trauermarsch in the piece commemorating Ladislaus Teleki. None of these works uses any traditional Hungarian material, but the flavour of the rhythms and cadences is unmistakable. The last three pieces are all very powerful elegies, and the last, the Funeral Prelude and Funeral March builds to a mighty climax over a repeated four-note motif of F sharp, G, B flat and C sharp, where the listener is constantly mystified about whether the piece is really wanting to be in G minor, despite the overwhelming insistence on the C sharp which triumphs at the end without ever giving the feeling that there is any real tonality adhering to it.