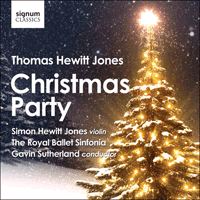 For many people, a good Christmas party is the highlight of their social calendar. It is a time when they can let their hair down, relax with friends and enjoy themselves. In this piece, the violin solo is the life and soul of the party. It plays host, greeting and introducing the guests as they arrive, one by one, in the form of Christmas carols, each with their own distinctive characters. The first on the scene is a popular, exuberant tune, Joy to the world!, and it’s a fantastic ice-breaker. Next to arrive at the party is an English folk song, I saw three ships, which heads straight for the bucks fizz. Skulking around slightly nervously is the old nursery rhyme, Christmas is coming, the goose is getting fat. But the drinks are flowing and everyone is in festive mood when the Yorkshire Wassail song, Here we come a-wassailing, joins the celebration. The guests at this Christmas party come from far and wide. They include a beautiful, gentle Polish carol, Hajej, nynej, Jezísku (Little Jesus, sweetly sleep, do not stir), a softly spoken French carol, Quelle est cette odeur agréable? (Whence is that goodly fragrance flowing?), and the universally popular German folksong, O Tannenbaum (O Christmas tree). But a party is not a party without dancing, and so this seasonal entertainment is rounded off with Tomorrow shall be my dancing day.

Child of the stable’s secret birth (2009) was the first of several carols I had published by Oxford University Press. It has since become one of my most well-known seasonal pieces, having seen performances all over the world (including one on YouTube from Southern India, with the charming sound of scooters passing in the background.) The vocal parts can be assigned to any combination of voices, and the rise and fall of the gentle melody weaves its way around Timothy Dudley-Smith’s timeless text.

On 11 July 2016, David Cameron made his final public statement to the British nation, appearing in front of 10 Downing Street to make an announcement about Theresa May succeeding him as Prime Minister. As Cameron turned and walked back through the front door of No 10, he hummed four musical notes to himself, captured by his lapel microphone which was still broadcasting. This quickly became a national news item. While powering down my studio, I saw a mention of the story on Classic FM’s news feed and I suddenly felt inspiration to turn this short musical motif into a more extended composition. So it was that after a long day’s composing I wrote, recorded and mixed my Cameron’s Lament between 12:45am and 2am that same night. By the next morning, the track had gone viral all over the world, and within a couple of days had been broadcast on TV and radio stations worldwide, as well as garnering hundreds of thousands of hits on YouTube and encouraging a great many other musicians to create their own responses to Cameron’s humming. For this Christmas EP I thought it would be amusing to produce a seasonal version of the track which supplements the original with celeste and tubular bells (rather than the ubiquitous sleigh bells, which didn’t really work). I hope this track captures the essence of post-Brexit sentiment.