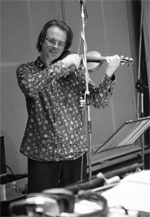 Simon’s solo and chamber music performances have been featured internationally in festivals and on TV/Radio throughout Europe, the USA and the Middle East, including NPR’s Performance Today, BBC Radio 2, 3 and 4, and Classic FM. His debut chamber music recording won a BBC Music Magazine ‘Premiere’ award. He tours extensively in the UK, and has appeared as a soloist and concertmaster at most of the UK’s major venues, including the Bridgewater Hall, the Barbican, St Martin-in-the-Fields, the Royal Albert Hall and the South Bank Centre.

Simon has contributed extensively to commercial projects for Universal Music, and his string section has recorded sessions for EMI, Virgin, Naxos and the BBC. He is a regular guest concertmaster of orchestras and ensembles in the UK and Europe. For almost a decade, he has visited the Palestinian territories regularly to work as a performer and educator in both the West Bank and Gaza.

For several years, Simon was a researcher at the Royal Academy of Music, exploring systems of violin pedagogy. He is the Artistic Director of two groundbreaking events in London, Music and the City and Classical Revolution London, and is the founder of ViolinSchool.com, an online school for the violin.