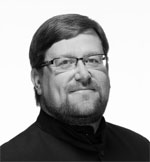 Gavin Sutherland is one of the busiest conductors and arrangers in the United Kingdom. In the world of dance he was pianist and staff conductor for Northern Ballet Theatre (1992-8) and has enjoyed a fruitful relationship with the Royal Ballet Sinfonia in its roles on the concert platform, in the recording studio and as the orchestra of Birmingham Royal Ballet. He has also worked as Principal Guest Conductor of the Royal New Zealand Ballet and has regularly guest conducted for the National Ballet of Japan, Atlanta Ballet, the New Adventures Dance Company and South African Ballet Theatre.

In 2008 he became Music Director of English National Ballet, becoming Principal Conductor in 2010.

As a pianist he performs as a concerto soloist, recitalist, accompanist and chamber musician, and he is also active as a composer/arranger, with his work being regularly performed by all of the BBC orchestras among others. Alongside this he is frequently involved in the reconstruction of lost orchestral works, from stage and screen.

Gavin Sutherland has performed on over 90 recordings as a conductor, chiefly of English music and mainly with the Royal Ballet Sinfonia, the City of Prague Philharmonic Orchestra and the BBC Concert Orchestra. In 2009 he was appointed Chairman of the Light Music Society.

He has appeared frequently for Raymond Gubbay as a conductor and arranger, including tours with Anton and Erin, Happy and Glorious, We’ll Meet Again, and Classical Spectacular, as well as their Royal Albert Hall collaborations with English National Ballet.