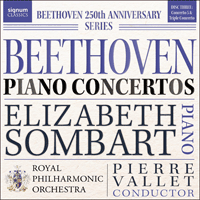 The famous 'Emperor' concerto is joined by the concerto for piano, violin and cello in these performances recorded to accompany Elizabeth Sombart's ongoing series at Cadogan Hall in London.

Piano Concerto No 5 in E flat major 'Emperor' Op 73
Beethoven finished work on this last and most imperiously all-embracing of his concertos in 1809, just as the walls of Vienna were collapsing under the inexorable might of Napoleon’s invading armies. Beethoven was incensed, berating one officer rather uncharitably: ‘If I, as a general, knew as much about strategy as I the composer know about counterpoint, I’d give you something to do!’ Meanwhile, Joseph Haydn, Beethoven’s one-time tutor, had passed away peacefully only a few streets away on 31 May.

The old regime was literally disintegrating around him, and Beethoven’s hearing was now deteriorating so rapidly that he was forced to face the prospect of never performing again in public. He was reported to be tying pillows to his head in his cellar against the noise of the battles outside, in order to protect what was left of his aural senses. Here he was with the concerto that represented the perfect vehicle for his unique performing style, and he was simply no longer up to the job. It took Beethoven three years to come to terms with the scale of the problem and finally allow the 1812 premiere to go ahead with Carl Czerny as soloist.

In the event this was probably just as well, if composer Louis Spohr’s recollections of watching the great man in rehearsal the previous year are anything to go by: ‘It was not a treat, for in the first place the piano was badly out of tune, which Beethoven minded little since he could not hear it; and secondly, on account of his deafness, there was scarcely anything left of the virtuosity of the artist which had formerly been so greatly admired. In forte passages the poor deaf man pounded on the keys till the strings jangled, and in the piano moments, he played so softly that whole groups of notes were omitted, so that the music was unintelligible unless one could look at the score. I was deeply saddened at so hard a fate. If it is a great misfortune for anyone to be deaf, how shall a musician endure it without giving way to despair? Beethoven’s continual melancholy was no longer a riddle to me.’

It would also seem that Beethoven’s personal circumstances (not to mention levels of hygiene) had gone to the board. Just as he was putting the finishing touches to the concerto, the Baron de Tremont paid the composer a visit in the summer of 1809. His diary entry paints a rather sad picture of the great man: ‘His lodging, I believe, consisted of only two rooms, the first one having an alcove containing the bed, but small and dark, for which reason he made his toilet in the second room, or salon. Picture to yourself the dirtiest, most disorderly place imaginable—blotches of moisture covered the ceiling; an oldish grand piano, on which the dust disputed the place with various pieces of engraved and manuscript music; under the piano (and I do not exaggerate) an unemptied pot de nuit … The chairs, mostly cane-seated, were covered with plates bearing the remains of last night’s supper.’

The concerto’s nickname ‘Emperor’ is current only in English-speaking countries and seems to derive from a remark made by the British piano maker J B Cramer, in which he described this blazing masterpiece as the ‘emperor among concertos’. Ironically, it is the work’s all-conquering spirit and unquenchable reserves of spiritual as well as physical energy that led the notoriously conservative Viennese audiences of the time to complain that Beethoven had ‘aimed beyond the comprehension of the common man’. However, it is now generally recognised as one of his seminal masterpieces in any genre.

Whereas the fourth concerto opens with the piano gently announcing the main material, the ‘Emperor’ announces itself with an imposing series of virtuoso flourishes, before the concerto proper has even got underway. The second subject is strangely unsettling, vacillating between its initial presentation in the minor mode in detached strings (the piano plays it in the recapitulation), and the legato warmth of the horns in the major. Having already surprised us with those mini-cadenzas at the start, Beethoven reduces the traditional cadenza to the briefest of reflections before leading to a massive final coda, one of the longest in the concerto repertoire.

For the slow movement, Beethoven pulls in the musical reins to create a magical oasis of peace and tranquillity, introduced by muted orchestral strings. There follow two main variations on this opening theme, the second an enchanting version for woodwind with piano accompaniment. Beethoven leads us directly into the finale with a halting version from the soloist of the main rondo theme to come, before it charges away in all-conquering mood.

Right to the end Beethoven remains unconventional. There is no traditional cadenza, and then the orchestra falls gradually silent save for the timpani gently murmuring the rhythm of the main theme. Quite out of the blue, the piano suddenly re-emerges with a stream of blistering octave unisons up and down the length of the piano, leading to a final brief orchestral flourish. With nearly 20 years of life remaining to him, but with his concertising days at an end, Beethoven’s love-affair with the concerto was over.

Triple Concerto in C major Op 56
Composed between 1803 and 1804, the ‘Triple’ Concerto develops upon the essentially good-humoured nature of the first two piano concertos, as though the angst-ridden third had never been composed. Yet it is no less radical in its departure from Classical norms, if less dramatically signalled. By subjecting his materials to various forms of temporal expansionism, Beethoven was moving towards a new period of macrocosmic expression, as is borne out by the first two ‘Razumovsky’ string quartets and the ‘Archduke’ piano trio. Fascinatingly, he chose not to expand his thematic material, but rather pass his ideas around in a dazzling array of different musical contexts and keys, thereby creating a template for the Romantic generation that followed.

Yet despite its interest for Beethoven scholars and its vital impact on the music of the next hundred years or so, the Triple’s Concerto’s lack of obvious dramatic muscle from this most expressively fervent of composers has led to its comparative neglect. The great English musicologist Donald Francis Tovey typically had his finger on the pulse when he suggested that if the work ‘were not by Beethoven, but by some mysterious composer who had written nothing else and had the romantic good fortune to die before it came into performance, the very people who most blame Beethoven for writing below his full powers would be the first to claim it as the work of a still greater composer.’

The Triple Concerto was one of the first works to be written for Beethoven’s distinguished piano pupil, Archduke Rudolph (one of the Emperor’s sons). Rudolph was no mean pianist himself, as is shown by the fact that he not only received the dedication of the ‘Emperor’ concerto—he could also play it. For reasons that have never been satisfactorily explained, the dedication of the Triple Concerto went to another supportive member of the aristocracy, Prince Joseph Lobkowitz.

The exact date of the first performance, presumably given by the Archduke’s private orchestra (for whom the work was originally intended) has gone unrecorded. Playing alongside Rudolph on this occasion was violinist Anton Seidler and acclaimed cellist Anton Kraft, who had led the cellos in Haydn’s orchestra at Esterházy. It would seem that Beethoven admired Kraft’s playing a great deal as he gave him the lion’s share of the spotlight, most notably in the slow movement. The cello is the first soloist to enter in all three movements and also plays the little unaccompanied bridge passage that leads into the finale.

The opening Allegro begins quietly in the cellos and basses, in complete opposition to the customary call-to-arms—interestingly, of Beethoven’s seven mature concertos, only the second and fifth for piano open imposingly. This builds into a gradual crescendo based on a sequentially repeated idea characterised by a dotted rhythm. This is then subtly transformed to become the second subject, announced initially by the orchestral violins. It would have challenged even a composer of Beethoven’s creative genius to write a cadenza for all three soloists and integrate it symphonically into the overall structure, so Beethoven simply side-stepped the issue by doing without one.

The brief, elegiac slow movement—a series of sublime meditations on a melody announced by the solo cello—appears to suspend time itself with its long-breathed phrases and sense of profound stillness. This only serves to heighten the sense of expectation for the Polonaise finale into which the cello leads us directly. This joyously expansive treatment of the triple-time Polish national dance is structured as a rondo, the returning polonaise section being contrasted and complemented by some of Beethoven’s most rumbustious invention.