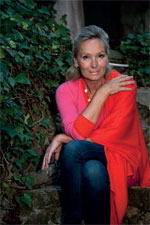 Born in Strasbourg, Elizabeth Sombart started studying the piano at the age of seven. She entered the conservatoire of her home town and gave her first public performance at eleven. After receiving the National Piano and Chamber Music First Prize, she left France to study in Buenos Aires with Bruno-Leonardo Gelber. Her training was completed with great masters such as Peter Feuchtwanger in London, Hilde Langer-Rühl in Vienna, and finally Sergiù Celibidache at the University of Mayence, with whom she studied musical phenomenology for ten years.

From a young age, Elizabeth has sought to share classical music with the most diverse audiences possible, and with people from disadvantaged backgrounds. In 1988, she created Fondation Résonnance, which is active today in seven countries. One of the foundation’s key goals is to bring classical music into the community, to institutions where it is most needed: hospitals, orphanages and prisons. More than five hundred concerts are planned in these venues every year. Fondation Résonnance also aims to create piano schools with the founding principles of free teaching, no exams, no competitions, no age restrictions, and using the teachings of the Résonnance Pedagogy—the phenomenology of sound and gesture.

Elizabeth has recorded an extensive discography, published several books, and featured in a number of documentaries. As a result of her expertise in musical phenomenology, she has a particular passion and reputation for interpreting the musical language of Chopin and she has recorded all Chopin’s nocturnes. She has made well-received recordings of Chopin’s two piano concertos with the Royal Philharmonic Orchestra, as well as Favourite Adagios, a double CD of adagio movements from the great piano concertos, also with the RPO. Elizabeth has recently appeared with tenor Andrea Bocelli by invitation in special gala concerts in Bucharest and Fatima.