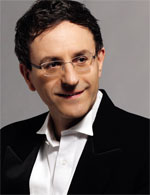 French conductor Pierre Vallet studied conducting and the theory of phenomenology in music with Sergiù Celibidache, piano with Louis Hiltbrand in Geneva and Peter Feuchtwanger in London. He is a graduate of L’Ecole Normale de Musique de Paris and the Conservatoire National Supérieur de Musique de Paris.

Praised for the elegance and intensity of his interpretations, Vallet is a frequent guest conductor with the world’s great opera companies. Performance highlights include Madama Butterfly and Faust at the Metropolitan Opera; Tannhäuser and Carmen at L’Opéra National de Paris; Samson et Dalila and Carmen at The Dallas Opera; Orfeo at Opera Theater Saint Louis; Don Carlo at the Lithuanian National Opera Theater; La Juive at the Göteborg Opera, Sweden; Faust at the Gran Teatro del Liceu, Barcelona. His North American premiere performance of Persée et Andromède by Ibert was selected by the New York Times as one of the top ten classical performances in New York in 2016.

He has enjoyed a long-term musical partnership with Seiji Ozawa, with whom he has worked closely on some forty operatic productions throughout Japan, the US and Europe. For the past 21 years, he has been associated with the Metropolitan Opera.

Maestro Vallet’s symphonic work includes appearances at the RPO in London; the Camerata Royal in Bucharest; the Filarmonica Brasov; the National Philharmonic of Chisinau, Moldova; the St. Petersburg Philharmonic Orchestra; and the Spoleto Festival USA. His discography includes two recordings with the RPO and Elizabeth Sombart of the Chopin piano concertos and a collection of Favorite Adagios of piano concertos, as well as Cendrillon by Nicola Isouard.

As a pianist, he has performed in duo recitals in both the US and Europe with some of the world’s most renowned singers, including Natalie Dessay, Maria Guleghina, Denyce Graves (at the White House), Dmitri Hvorostovsky, Roberto Alagna (at the Vienna State Opera), Nancy Herrera (at the Teatro Solis in Montevideo) and Joyce di Donato.

A committed educator, Pierre Vallet is a sought-after lecturer and guest teacher at the world’s premier training institutions. In addition to his work with the Lindemann Young Artist Development Program at the Met, he has been a regular visitor to the Washington Young Artist program, the Steans Music Institute in Chicago, the Tanglewood Music Center, the Wolf Trap Opera Company, the Houston Grand Opera Studio.