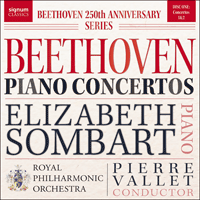 Throughout her life French pianist Elizabeth Sombart has sought to share classical music with the widest possible audience and with people from disadvantaged backgrounds. Here she continues her series of recordings with the RPO and conductor Pierre Vallet, inaugurating a new cycle of Beethoven Piano Concertos, works she will be performing with the orchestra during the course of 2020.

Beethoven’s early musical career was linked inextricably with the piano, both as a performer and composer. His early lessons at the hands of his alcoholic father would have broken many a lesser child—he was regularly dragged from his bed for an impromptu tutorial or to perform in front of a drunken gathering. Late at night, neighbours reported seeing him practise ‘standing on a low bench in front of his clavier, sobbing fitfully’ as his father looked menacingly on. Beethoven dutifully made his concert debut aged seven, and three years later had his first composition published: a set of variations for solo piano.

Although phenomenally gifted, Beethoven was not a piano virtuoso in the classic tradition. He belonged to no particular school of playing and possessed a technique that while thoroughly effective when supporting his many tempestuous outbursts, was considered inelegant by contemporary standards. In 1787, he met Mozart in Vienna—the contrast between the two could hardly have been more marked. Mozart was a dapper young man, well-dressed and outwardly frivolous, while Beethoven was intensely serious, with unkempt hair, bullish looks and largely ignorant of society etiquette. Mozart agreed to hear him play, however, and although bemused by his stormy musical temperament, recognised in him a kindred spirit: ‘Watch this lad,’ he commented, ‘Some day, he will force the world to talk of him!’

From now on Beethoven’s musical development progressed at a staggering rate. He moved to Vienna, had a series of indifferent consultations with Joseph Haydn and quickly realised that the only way forward was to win sponsorship from wealthy patrons. Accordingly, he dedicated his Op 1 Piano Trios to the renowned admirer of chamber music, Count Moritz Lichnovsky. This shameless piece of flattery clearly had the desired effect for within a month of the trios’ publication, Beethoven was invited to premiere three new piano sonatas (his Op 2) at the Count’s palace. In addition, he was given his own apartment in Lichnovsky’s mansion, where the servants were given strict instructions to answer the young firebrand’s bell even before the Count’s.

By now Beethoven was already more than a match for any of his German contemporaries, as can be gathered from an account given in the magazine Musikal by Carl Junker in 1791: ‘I also heard one of the greatest of pianists—the dear, good Beethoven … I heard him extemporise in private; yes, I was even invited to propose a theme for him to vary. The greatness of this young man, as a virtuoso, may in my opinion be safely estimated from his almost inexhaustible wealth of ideas, the altogether unique expression in his playing, and the great powers of execution which he displays.’ On 29 March 1795, Beethoven created a sensation with the premiere of his B flat piano concerto (which became ‘No 2’ in its revised form). Although the concerto known as ‘No 1’ was composed shortly afterwards, it was the first to be published and so was awarded pride of place.

Beethoven had meanwhile made many personal enemies of pianists who had fallen by the wayside in comparison with his somewhat unrulybut prodigious talent. Yet despite (or perhaps because of) his unpredictable behaviour and irascible outbursts, the aristocracy had taken him very much to their collective bosom. Indeed, such was his impact that by the turn of the century he had become fully established both as an independent pianist and composer, and can therefore be considered the first successful, major freelance musician.

Piano Concerto No 1 in C major Op 15
Beethoven dedicated his first piano concerto to Countess Babette von Keglevics, a gifted blonde pupil with whom the 25-year-old composer was very much enamoured at the time. Cast in the standard three movements, it overflows with original touches, such as the very opening, where the militaristic first theme is sounded not as a trumpet call-to-arms (as would have been customary at the time) but by the string section playing pianissimo. The second main theme, announced by the first violins, then turns out to be little more than a decorated descending scale answered by a gently rising and falling chord sequence in the woodwind. Most surprising of all, the piano’s very first entry has very little to do with this introductory material at all. Little wonder Beethoven retained a great deal of affection for this bracingly inventive movement, for which he wrote no fewer than three versions of the pianist’s solo cadenza.

The central Largo is the longest of all Beethoven’s concerto slow movements, its calm, flowing phrases providing the perfect antidote to the Allegro con brio’s bracing athleticism. For the finale, the composer lets his hair down with a scampering main theme introduced by the soloist and immediately taken up by the full orchestra, thereby reversing normal procedure. He saves his best joke till last, however, when just as it sounds as though the music has quietly petered out, he adds a final vivacious outburst that never fails to catch out the unwary listener.

Piano Concerto No 2 in B flat major Op 19
Beethoven was the single most influential figure in the history of Western music. Starting out with Mozart and Haydn as his spiritual mentors, he wrestled off the shackles of 18th-century Classicism, forging uncompromising musical landscapes with a visionary intensity that left most musicians quavering in his wake. Meanwhile, his lack of social etiquette set him on a collision course with even his most devoted patrons as well as a string of society-women, whom he was in the habit of falling hopelessly in love with. Not even the cruel onslaught of deafness could silence his noble creative spirit. For centuries music had lagged behind the other arts, but spurred on by Beethoven’s iron-clad will, it found itself at the cutting edge of social change.

To see the young lion in full flow was an awesome spectacle. Pianos literally buckled under the relentless pressure exerted by his groundbreaking scores. In mid-performance hapless piano technicians would find themselves feverishly trying to prize away broken strings and hammers while Beethoven simply kept on going, pulverising the instrument into submission. Here, at last, was someone completely in tune with the mood of the times.

Beethoven’s earliest fully orchestrated work for piano and orchestra—a delightful Rondo in B flat dating from around 1793—was integrated initially into the burgeoning second concerto. The completed work was dated ‘March 1795’, the initial draft predating any known sketches for the first concerto by at least seven years. It is only the fact that Beethoven subsequently revised the second concerto in 1798 and then published it after ‘No 1’ (in December 1801) that has led to its somewhat misleading numbering.

On 29 March 1795, Beethoven created a sensation with what is widely assumed to have been the premiere of his B flat piano concerto (destined to become ‘No 2’ in its revised form). Typically, he was working on a replacement Rondo finale up until the last minute. According to a friend, it was completed just two days before the concert, ‘and then while suffering from a pretty severe colic, which frequently afflicted him … In the afternoon sat four copyists to whom he handed sheet after sheet as soon as it was finished.’ It was around this time that fellow-composer and pedagogue Carl Czerny reflected on Beethoven’s pianism: ‘In whatever company he might chance to be, he knew how to produce an effect upon every hearer, so that frequently not an eye remained dry, while many would break out into loud sobs.’

Beethoven’s later dismissal of his second piano concerto as ‘not one of my best compositions’ seems a little harsh. He was no doubt concerned at the time by its occasional nod in the direction of Haydn (whose teaching Beethoven had effectively rubbished) and, most especially, Mozart. Yet it is its unmistakably Beethovenian touches that give this high-spirited concerto its unique flavour.

Who, for example, but Beethoven would have so flouted convention by side-stepping the ‘correct’ key of the opening movement’s second theme (F major) into the remote world of D flat? No wonder many of the cognoscenti thought he was raving mad. One observer admired Beethoven’s ‘powerful and brilliant playing’, yet was somewhat less taken with his ‘daring deviations from one motive to another’, which he felt ‘weaken even his greatest compositions’.

The long-breathed central movement is no less groundbreaking in its expansive use of sonata form, but with the central ‘development’ section telescoped into a mere six bars. Where the soloist would normally have been expected to tastefully improvise around the main theme second time around, Beethoven circumvented the possibility of hackwork from second-rate performers by writing it out in full in the manuscript.

Perhaps finest of all is the madcap finale, whose main theme hilariously displaces the expected rhythmic profiling, so that what should fall naturally before the beat actually arrives on it. Beethoven points up the joke just before the end when he briefly appears to get the rhythm correctly sorted out, only now he seems to have strayed into the ‘wrong’ key (G major). The world of music had been turned topsy-turvy in an instant.