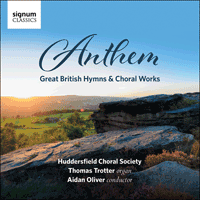 Founded in 1836, the Huddersfield Choral Society has developed an international reputation as one of the UK’s leading choral societies. This new recording features works that remain central to the choir's musical heritage: music by Handel, Elgar, Vaughan Williams, Holst and many more.

For choral singers, the 22-bar introduction to Handel’s anthem Zadok the Priest is one of the most tinglingly expectant in the repertoire, as the music’s stately flow builds through a gradual crescendo to the explosive vocal entry. The text, when it finally arrives, announces the joyful anointing of the Old Testament King Solomon, to whom God granted “a wise and understanding heart”. Another crowning ceremony, that of King George II in 1727, was the occasion for which Handel’s Zadok the Priest was written. Its splendid evocation of regal majesty made the anthem instantly popular, and it has been heard at every English coronation since.

Earthly pomp and circumstance are left behind in the English composer Edgar Bainton’s And I saw a new heaven. Here the composer sets four verses from the Book of Revelation, in which “a new earth” is imagined where God dwells with His people. Bainton’s setting employs the soothing, gently swelling harmonies of a late romantic idiom to conjure the ecstatic vision of this new world order, where “there shall be no more death, neither sorrow, nor crying, for the former things are passed away”.

A simpler musical language is used in Edward Elgar’s setting of the Eucharistic hymn Ave verum corpus. Sweetly invocatory, even sentimental in places, Elgar’s music is technically uncomplicated, partly because at the time he wrote it he was organist at St. George’s Catholic Church, Worcester, where his father occupied the same post before him. The challenge for Elgar was to compose a piece which a non-specialist choir could sing fairly easily, without dumbing down its spiritual content. Ave verum corpus fills that remit admirably, and remains a staple of the church choir diet.

Simplicity is also a keynote in Vaughan Williams’s O how amiable, and again the reason is the circumstances in which it was composed. In 1934 the novelist E.M. Forster wrote “The Abinger Pageant”, a play about the history of England, performed to aid preservation work at a church near where he lived in Surrey. Vaughan Williams’s anthem was written to be sung by amateur performers as part of the festivities, and the mainly unison writing reflects this. It also emphasizes the communal nature of the pageant experience, as does the addition of a verse from the famous hymn “O God our help in ages past” at the conclusion.

The “courts of the Lord” are also mentioned in Benjamin Britten’s Jubilate Deo, but Britten’s celebration of the refuge and protection provided by Christian belief is markedly more extroverted than in Vaughan Williams’s Abinger setting. The swirling organ line and vaulting vocal parts suggest exhilaration and fervour, although the sudden hush that descends at the words “world without end” brings sudden introspection, and a reminder of the deep, unfathomable mysteries underlying God’s creation.

That Vaughan Williams was also capable of extroversion and raw excitement is evident in The Hundredth Psalm (“All people that on earth do dwell”), his arrangement of the famous sixteenth century hymn melody, with words from Psalm 100 in the Scottish clergyman William Kethe’s translation. First heard at the coronation of Her Majesty Queen Elizabeth II, Vaughan Williams’s arrangement provided a rousing context in which to set the mass of congregational voices which filled the vast interiors of Westminster Abbey at the 1953 service. The peal of trumpets and clash of timpani in the outer movements are particularly stirring, summoning images of a colourful state ceremony, and emphasizing the perennial certainties of a faith which, in the words of the psalmist, “shall from age to age endure”.

Hubert Parry’s My soul, there is a country, by contrast, examines the situation of the individual believer approaching the conclusion of life’s journey. One of six motets collectively entitled “Songs of Farewell”, Parry completed My soul as his health declined, and the outbreak of World War One was causing his mood to darken. In these gloomy circumstances it is the steadfast optimism of Parry’s setting of lines by the seventeenth century poet Henry Vaughan which is most striking. Here is no fearfulness, or supine capitulation: God is “thy life, thy cure”, the poet says, and Parry responds with clarion confidence at the work’s conclusion.

A confident, muscular style of Christianity also animates Give unto the Lord, Edward Elgar’s setting of Psalm 29. When Elgar wrote it in 1914 he was already a vastly experienced composer, and he revels in the opportunities the text affords him for vivid characterisation and detailed word-painting. The dashing organ skirl as the Lord’s voice moves on the waters, the hammering sforzandos on the word “thundereth”, the choppy accents at “breaketh the cedars”—these are just some examples of the compositional virtuosity that pepper this ebullient piece of writing.

There is ingenuity too in Gustav Holst’s Psalm 148, written when he was director of music at the newly founded St. Paul’s Girls’ School, London. From a simple unison statement of the familiar hymn tune he uses to match the adapted biblical text, Holst sets the “Alleluia” echoing around the voice parts, like a band of angels in friendly imitation. Two unaccompanied verses follow, for upper and lower voices respectively, before the echo patterns return in a pealing final stanza, and a ringing coda where at one point Holst divides the vocal part-writing into seven.

This keynote Christian tenet—that eternal life and peace are available to all believers—is summarised in two famous verses from the Gospel of John, set by John Stainer in his perennially popular oratorio The Crucifixion. God so loved the world is placed by Stainer at the heart of his seventy-minute meditation on Christ’s Passion, and acts as a still point of reflection on the theological significance of the bloody suffering involved in death on the cross. Befitting the solemnity of the moment, Stainer’s music is marked to be sung softly, and the organ accompaniment used elsewhere in the work is silent.

The organ returns in A New Song by the contemporary Scottish composer James MacMillan, not merely to “accompany” the singers, but as a major player in the developing narrative of MacMillan’s setting. Its swirling, vertiginous patterns set the “new song” of the psalmist into motion at the unison invocation of the singers. The “song” itself echoes clamorously through the choir, whose skirling vocal roulades act as an exuberant symbol of the salvation offered daily to the Christian believer. But the organ, imperious and forbidding, has the final word, in a coda where the righteous, truth-telling judgment awaiting all humanity is clearly adumbrated.

From prayer to praise and celebration: Gerald Finzi’s God is gone up sweeps from the starting blocks in an elated fashion, primed by the reed stops of the organ lustily imitating the “sounding trumpets’ melodies” referred to in the poem by Edward Taylor, an Englishman who emigrated to America in 1668, working as a pastor and physician. A contrasting, quieter middle section follows, where lighter textures evoke “heaven’s sparkling courtiers” attending the ascended Christ, before the opening music returns, climaxing in resplendent six-part harmony on the word “glory”.

The ability of the organ to evoke a wide variety of moods and settings is evident again in Seek him that maketh the seven stars, a setting of verses from the Book of Amos and Psalm 139 by the contemporary English composer Jonathan Dove. Before the voices enter, as Dove describes it, “the anthem begins with a musical image of the night sky, a repeated organ motif of twinkling stars that sets the choir wondering who made them”. The repeated “seek him” mantra is answered in a blaze of affirmation at “Alleluia”, as the shining brilliance of the creator-spirit illuminates all around it.

And, finally, full circle to another coronation, that of King Edward VII in 1902. For that ceremony Hubert Parry turned to Psalm 122, with its inspirational vision of Jerusalem, city of God, where “peace and plenteousness” await the righteous. Parry’s setting is widely acknowledged as one of the greatest anthems of its type ever written. Its rock-solid sense of faith and certainty is reflected in music of immense nobility, hewn from moral granite, and still possessing the ability to inspire and reassure the listener more than a century after it was written.