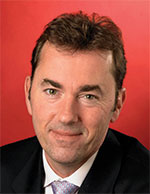 Thomas Trotter is one of Britain’s most widely admired musicians. He has maintained a special relationship with the City of Birmingham in England since he was appointed City Organist in 1983—after Sir George Thalben-Ball—based at the city’s renovated historic Town Hall as well as Resident Organist of the magnificent Klais organ in Symphony Hall. He is also Organist at St. Margaret’s Church, Westminster Abbey, in London and Visiting Fellow in Organ Studies at the Royal Northern College of Music. Earlier in his career he was organ scholar at King’s College, Cambridge, and he later continued his studies with Marie-Claire Alain in Paris where he took the Prix de Virtuosité in her class.

Thomas Trotter has been awarded the Royal Philharmonic Society’s prestigious Instrumentalist Award in recognition of his particular achievements as ‘one of the foremost exponents of the organist’s art’, International Performer of the Year Award for 2012 by the New York City Chapter of the American Guild of Organists and, in 2016, the Royal College of Organists Medal. He has performed as soloist with conductors Sir Simon Rattle, Bernard Haitink, Riccardo Chailly, Valery Gergiev, Sir Charles Mackerras and, amongst many others, succeeding generation’s Jukka-Pekka Saraste, Sakari Oramo, Edward Gardner, Francois-Xavier Roth, Petri Sakari, Andris Nelsons and Thomas Sondergaard.

He appears at the festivals of Salzburg, Berlin, Vienna, Edinburgh and London’s BBC Proms. He performs with leading orchestras such as the Vienna Philharmonic, Berlin Philharmonic, London Philharmonic, Philharmonia Orchestra and Royal Philharmonic orchestras. Alongside his regular recitals in Birmingham, Thomas Trotter performs throughout the USA and Europe.

He became an extensive recording artist for Decca in 1989. His most recent recordings—Elgar at Salisbury Cathedral, organ transcriptions from the newly restored Birmingham Town Hall, a collection ranging from Handel through to Litaize on the new Mander organ at St Giles Cripplegate, Grand Organ Prom on the renovated organ at the Royal Albert Hall and The Town Hall Tradition from Birmingham Town Hall all appear on the Regent label. Of his many other CDs he received a Grand Prix du Disque for his recording of music by Liszt. 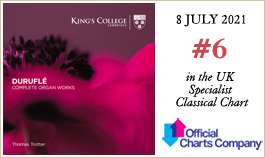