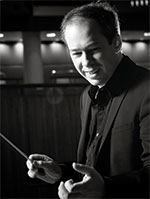 Aidan Oliver pursues a diverse career at the heart of London’s musical life, working as conductor, chorus master and music staff with organisations including the Philharmonia Orchestra, the Royal Opera House, and Westminster Abbey. One of the UK’s most experienced chorus masters, he works across the full range of church, symphonic and operatic music at the highest levels.

He is the founder and director of Philharmonia Voices, a professional chorus which collaborates with the Philharmonia Orchestra on many of its most high-profile projects. Working particularly closely with the orchestra’s Principal Conductor, Esa-Pekka Salonen, Aidan has also collaborated with conductors including Ashkenazy, Maazel, Schiff, Dohnányi and John Wilson. The choir made its Proms debut in 2015.

For the Royal Opera House, Covent Garden Aidan has worked on the music staff of numerous productions, while for English National Opera he has acted as guest chorus master for productions including Beethoven Fidelio, Britten Peter Grimes and Wagner Twilight of the Gods. Since 2003 he has been Director of Music at St Margaret’s Church, Westminster Abbey, where the organist is Thomas Trotter and services include many high-profile occasions connected with Parliament.

Aidan Oliver began his musical career as a chorister at Westminster Cathedral, later studying at Eton College and at King’s College Cambridge. After graduating with a double First in Classics, he pursued further studies at Harvard University (as a Kennedy Scholar), the National Opera Studio and King’s College London.