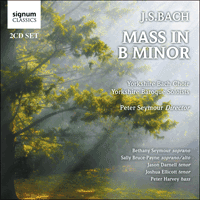 Mass in B minor

The Yorkshire Baroque Soloists and Yorkshire Bach Choir were formed in 1973 as the basis of the famous York Early Music Festival, and have built a firm reputation as one of the finest ensembles in the world in their performance and interpretation of seventeenth and eighteenth century music. Under their director Peter Seymour they return to disc with a fine selection of soloists to perform Bach’s Mass in B minor, BWV 232.

Towards the end of his life, Bach became concerned with the need to prepare new compositions or revisions of earlier works that would summarise not only his own skills but those of the whole Baroque era, then being elbowed aside by the emerging galant and classical styles. Large-scale collections from the 1740s such as Musikalisches Opfer (Musical Offering) and Die Kunst der Fuge (The Art of Fugue) demonstrated his ability to write music of great beauty within the most abstruse contrapuntal forms and the collection of organ chorales now known as the Eighteen is among his finest works for the instrument. Against this background the Mass in B minor (a title first used in the 19th century) can be seen as a monument to what its composer considered his God–given genius as a composer of sacred music.

In fact, the movements that comprise the Mass date from widely separated phases of Bach’s career. The ‘Kyrie’ and ‘Gloria’ (which were actually entitled Missa) were composed for the services mourning the recently deceased Elector of Saxony and celebrating his son’s ascension in 1733; the ‘Credo’ (originally entitled the Symbolum Nicenum) dates from the late 1740s; to complete the Mass setting Bach used a Sanctus written for Christmas 1724 and then added four re-workings of cantata movements for ‘Osanna’, ‘Benedictus’, ‘Agnus Dei’ and ‘Dona nobis pacem’. The last of these is actually Bach’s third use of this well constructed piece as it originated in Cantata 29 and was then adapted as ‘Gratias agimus tibi’ in the 1733 Missa. There are suggestions that Bach might have put the full Mass together in preparation for the rededication of Dresden Hofkirche in 1751. Many commentators have noted not only historical but also musical reasons for this thesis, such as the plentiful use of wind obbligatos for the arias—very much to the taste of Dresden audiences.

Bach wrote little music setting Latin texts. Apart from the Mass performed here and the original versions of various parts of it (though sometimes originally with German texts) there are five other settings of the ‘Sanctus’, four missae breves and the famous Magnificat of 1723, originally in E flat but re-worked in D major in the 1730s. Magnificat was an opportunity for Bach to establish himself at Leipzig both in terms of his credentials as a composer and as a communicator, as a teacher. In Magnificat he shows his mastery of the latest compositional fashions, often in miniature form such as concerto grosso and operatic aria. He even shows that he has the confidence to deliver the unexpected, here with a choral invasion into the aria ‘Quia respexit’ to the text ‘omnes generationes’ (all generations) in place of the repeated first section of what should have been a da capo aria. Alongside his employment of new forms, Bach also shows his mastery of older contrapuntal techniques used not only according to the strict rules which govern it but also again breaking the ‘rules’ in ‘Omnes generationes’ with the fugal entries being presented across two rising scales.

Magnificat is here described at some length because in many ways it proved a training ground for Bach for the Mass in B minor. In the earlier piece he was communicating with the uninformed listener (and performer), especially in his more obvious word painting and joyous orchestration (Mary’s excitement at her news, heard in the two opening movements), but also with the informed listener or performer such as with his use of the relative minor for Mary’s more intimate, personal thoughts in ‘Quia respexit’ or his use of the diminished 5th (as well as its doubled version giving a diminished 7th) for ‘inanes’ (empty) in ‘Esurientes’, and again to suggest doubt that all generations will call Mary’s name holy in ‘Quia respexit’ (ecce enim ex hoc beatam/for behold, from henceforth I shall be called blessed).

In the ‘great Catholic Mass’ (as C.P.E. Bach described it) Bach takes his teaching and communicative purpose to greater depths. The communication with the innocent, uninformed listener is present in the ecstatic dancing vision of heaven in the ‘Gloria’ and the ensuing, equally ecstatic earthly peace in ‘Et in terra pax’; the more informed will recognise the plainchant theme of the ‘Credo’, the use of a sarabande form for ‘Crucifixus’—at the structural centre of the Symbolum Nicenum as it is in the cello and keyboard suites and representing the most important and dramatic parts of the argument—as well as its chromatic falling ground bass line. The more informed might also have heard the chiasmus (cross) reference between the vertical orchestral writing and the horizontal choral lines in the same movement. The key at the start of the movement is E minor, associated with sadness and pain; but the movement ends in G major, associated with happiness, blessedness and victory. The following movement, ‘Et resurrexit’, is in the festive, earth-rejoicing key of D major and this wild dance is scored for the whole festival orchestra.

The centrality of this movement within Bach’s faith is confirmed by a technique employed by Bach, by no means uniquely, of setting a lengthy section as a structural palindrome, a figure which itself represents Christ on the Cross. This technique, perhaps more than any other, provides an insight into Bach’s mind; even the title of this section—Symbolum Nicenum—hints at his purpose. The ‘trunk’ of the palindrome tells us what Bach considers to be the central message of his composition. In Matthäus-Passion this trunk includes the soprano recit ‘Er hat uns allen wohlgetan’ (He has done good to us all) and aria ‘Aus Liebe will mein Heiland sterben’ (My Saviour is willing to die out of love) and again tells us Bach’s essential message for this particular composition. The palindrome in the Symbolum Nicenum is very clear though not, of course, until we get to its conclusion or examine the score afterwards. But it does clarify to us the centrality of Christ’s death within Bach’s faith. As we, for the first time, hear the ‘Crucifixus’ the clues are aural with the orchestration, the key, the dance form, the vertical and horizontal settings and the chromatic falling bass offering plenty of reason to take note. The palindrome confirms what we have heard.

The palindrome is a useful confirmation of what should be audible, and should encourage the performers to make clear to the listeners this statement of belief. As such, it is an invaluable source of communication from Bach to us, though I doubt that when he composed the Mass he was thinking of performances more than 250 years after his death.

One further example of Bach’s extraordinary use of symbolism and, perhaps, one where he communicates essentially with God rather than with us—and certainly not in order to indicate how we should perform his music (as opposed to the information discussed above)—is to be found in the first two movements of the Symbolum Nicenum. The ‘Credo’ has 43 entries of the plainchant melody first sung by the tenors; in musico-numerological terms CREDO (I believe) equals 43. In Bach’s manuscript of the next movement, ‘Patrem omnipotentem’, he surprisingly writes “84” at the end; as it happens there are 84 bars in the movement, but it is unusual for him to have shown that he has counted them. He adds the text ‘Credo in unum Deum’ to this second movement although we have already heard this text in the ‘Credo’ and would not usually expect it to be repeated in a subsequent movement. ‘Credo’ appears homophonically (i.e. vertically) at the start of the movement and again at bar 42 (half-way through the movement) and each time is set against contrapuntal (i.e. horizontal) material in the other voices and instruments. Again he presents an aural and visual chiasmus (cross) figure. What the addition of these words also achieves is to make the number of letters in the complete text total 84. Pure chance? Perhaps, but it is the same number as there are bars in the movement. So what? Well, in musico-numerological terms, JS BACH = 41; 41 + 43=84. This spells: ‘I, JS Bach, believe’!

Wilfrid Mellers wrote: ‘Truly this work is one of the greatest manifestations of man’s essentially religious spirit and, like Beethoven’s Missa Solemnis, an immortal testimony to his quest for eternal truth.’ Peter Wollny agrees: ‘In the complexity and consistency of its conception and its monumental and elevated character, the Mass in B minor undoubtedly embodies one of the greatest artistic achievements of western culture.’