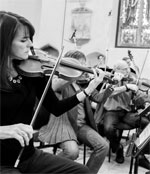 Yorkshire Baroque Soloists was formed in 1973 by Peter Seymour to perform a repertoire from the 17th and 18th centuries for forces ranging from chamber to orchestral size. The group has performed and recorded in most European countries and forms the basis of the baroque and classical parts of York Early Music Festival.

Much of the orchestra’s work has been with Yorkshire Bach Choir and recent performances have included Bach Christmas Oratorio, Mozart Requiem and C Minor Mass, Cantatas for the Feast of St Michael by Bach and Monteverdi Vespers of 1610. Commercially released recordings have included the Mozart, Victoria, Monteverdi and Bach CDs with YBC. In 2010 YBS recorded Bach St John Passion for Signum Records.

YBS performed a programme for Channel 4 about Bach’s work in Leipzig in which, amongst other compositions, they performed Bach Ascension Oratorio. In recent York Early Music Festivals the BBC and WDR have recorded the group’s performances of Handel Semele, Alexander’s Feast, Bach Cantatas for the Feast of St Michael, Purcell Come ye Sons of Art, The Yorkshire Feast Song, Blow Welcome every guest (edited by Peter Seymour), Clarke Music on the Death of Henry Purcell, Haydn Theresienmesse, Mozart Requiem, Purcell Dioclesian and a psalm sequence of music by Charpentier. Additionally, there have been recordings of Schütz (St John Passion, Seven Last Words, Resurrection History) and some new editions (also by Peter Seymour) of biblical narratives by Purcell and Blow. YBS recently performed Purcell Fairy Queen and Dido & Aeneas in Festival Mitte Europa (in Germany and Czech Republic). In 2009, YBS presented a Purcell Day of three concerts in Merseburg (Germany) and at Köthener Herbst performed a programme of music by Bach, Torelli and Handel from Bach’s library from his time at Köthen.