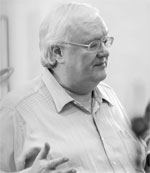 Peter Seymour studied at Huddersfield School of Music and at University of York, including post–graduate work researching into the performance of Baroque music. In July 1994 he was awarded the degree of DMus at University of York for research into performing style. He is Professor of Music and Organist at the University of York and director of Yorkshire Baroque Soloists, Yorkshire Bach Choir and Corona Coloniensis and has worked and recorded in most European countries. He is also an artistic adviser to York Early Music Festival. He has recorded regularly both as conductor and keyboard player for WDR–Köln, BBC and other radio stations. As a keyboard player he has appeared with singers Yvonne Seymour, Stephen Varcoe, Emma Kirkby, Lynne Dawson, Mhairi Lawson, Barbara Schlick, James Bowman, Thomas Guthrie, Thomas Thomaschke, David Thomas, Christoph Prégardien, Ian Partridge, James Gilchrist, Roderick Williams and Matthew Brook as well as instrumentalists Crispian Steele-Perkins, Lucy Russell, Simon Jones, Anthony Robson and Pamela Thorby. He is keyboard player with Compagnia d’Istrumenti who are an Ensemble in Residence at University of York.

As conductor he has performed much of the standard Renaissance, Baroque and Classical choral repertoire and has conducted the various recordings made by YBC and YBS. He has also conducted much of the large-scale 19th and 20th century choral repertoire. As a solo keyboard player on harpsichord, fortepiano and organ he has recorded music by Bach, Buxtehude, Böhm, Pachelbel, Bruhns, Purcell, Blow, Prendcourt, Stanley, Arne and Duphly; a major project for WDR-Köln was to record C.P.E. Bach’s last six volumes of keyboard works.

He has performed at many festivals throughout Europe, in Festival Mitte Europa (in Germany and Czech Republic), Merseburg Orgeltage, Köthener Herbst, Knechsteden, Düsseldorf, Aarhus and Corfu and directed Christmas Oratorio, St Matthew Passion and Dido & Aeneas in Hong Kong.

Recent scholarly performing editions have included Sweelinck Cantiones Sacrae, A Gabrieli Missa Quando lieta sperai, anthologies of Victoria psalms and antiphons (1600), motets by members of the Bach family and celebratory odes by John Blow (Ode on the Death of Mr Henry Purcell) and Daniel Purcell. These are published by York Early Music Press. He is currently preparing editions of music for St Cecilia’s Day and other similar occasions by Turner, Blow and Daniel Purcell.