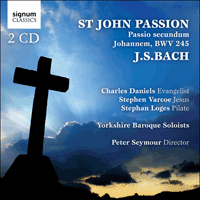 J S Bach’s ‘Passions’ have been said to employ the word with more than one meaning—as well as telling the story of Christ’s sacrifice, they are simultaneously a celebration of human feeling in the joy and suffering of man’s pilgrimage on earth. The expert Yorkshire Baroque Soloists bring all of these feelings to life in a dramatic and resonant performance of Bach’s Passio Secundum Johannem (St John Passion).

Joined for this recording by the excellent Charles Daniels, Stephen Varcoe and Stephan Loges, the Yorkshire Baroque Soloists have been a leading light in the world of early music performance since their formation in 1973.

'This St John Passion almost induces a whiff of nostalgia. But there is nothing nostalgic about Peter Seymour's lean, purposeful direction … some touches are highly compelling' (BBC Music Magazine)» More

Although Bach is the greatest composer of the ‘classical baroque’ era he is a less representative figure than Handel; and this fact has something to do with his cultural heritage. Partly as a consequence of the devastations of the Thirty Years War, Germany had been split into Catholic south and Protestant north: a frenetic bifurcation still evident today, and nearer home. The art of the south fostered the flamboyance of Italianate operatic lyricism, whilst the north favoured the abnegatory fervour of German contrapuntal science and harmonic tension. In the work of Bach’s predecessor Schütz the two traditions merge; the sun–baked brilliance of Monteverdi (with whom Schütz studied) finds its way into his early works, composed for the chapels of German princelings, yet his music preserves a mystical intensity that concentrates on Christ as man–god, equating his suffering with ours. And ‘our’ anguish, in Schütz’s day, was patent enough: for especially after the War Teutonic apotheoses of humanism flourished over an abyss. This was sometimes literally true: Esterhazy, later the home of Haydn’s princes, was a fairy–tale Versailles built by serfs over a marshy morass. It’s hardly surprising that as Schütz grew to old age he concentrated increasingly on Christ’s Passion, incarnate in musical and liturgical styles that became progressively more austere.

By Bach’s day the Church was still the hub of social life in Germany; and the operatic techniques which proliferated throughout Europe were still employed to religious rather than secular ends. This is nowhere more manifest than in his Passion musics, in which the ‘passion’ is simultaneously a celebration of human feeling—our joy and suffering in our pilgrimage on earth—and also Christ’s sacrifice. So the centre of the experience is in the recitative, an entirely operatic convention which, growing from the inflections of the German language, enables us to live through the Christian story with physical and psychological immediacy. No less dramatically immediate is the presentation of the crowd in choral homophony or polyphony. The arias, on the other hand, though obviously an operatic convention, are seldom operatic in effect, but rather lyrical meditations on what has occurred in recitative, in the lyrically heightened recitative called arioso, and in the chorus’s vividly realistic intrusions. The choral music too has its reflective aspect in the chorales—popular hymns often based on secular folk songs, harmonized in four–part homophony, wherein unredeemed ‘Faustian’ man appeals for divine salvation. The potency of Bach’s music depends on the complex interaction of these contributory elements. Detailed comment on one episode from the St John Passion will perhaps illuminate this more helpfully than a general survey.

Let us consider that marvellous passage, near the beginning of the Second Part, that begins with the crowd’s murderously homophonic– harmonic yelling for the blood of Christ: here the baroquely ‘social’, public nature of their music reflects their unredeemed, more bestial than human state. Their savagery leads into a recitative that briefly but shatteringly depicts the scourging of Christ in melodic line that enacts the gestures of lashing, and in dissonant harmonic implication renders incarnateChrist’s (and vicariously our) pain.

With scarcely a pause the music then relaxes to the flat submediant: in which key a bass solo sings an arioso, 'Betrachte, meine Seel’ mit ängstlichem Vergnügen', harmonically ‘earthed’ in long pedal notes and dropping chromatics, yet generating from spread chords, arching upwards through minor sevenths, a sense of lyrical release. Despite incidental dissonances and tonal instability, the long lines, floated across the bars, dispense balm, as the text speaks of the redemptive significance of Christ’s pain. Perhaps it is not fortuitous that Bach introduced, for this one arioso, an obbligato lute seeming to equate Christ as man–god with lute–playing Orpheus–Dionysos, who conquered sin and death through the divine power of music; the equation was traditional, if intermittent, ever since the Middle Ages. For later performances Bach replaced the lute with an organ or harpsichord.

In any case the arioso is prelude to an aria 'Erwäge, wie sein blutgefärbter Rücken', that translates Christ’s wounds into a paradisal vision. In the instrumental postlude to the arioso the lute figuration doubles in time–value; and the aria follows in C minor, dark relative to the arioso’s E flat major. The intertwining of the solo tenor line with two obbligato parts and a melodic bass creates both rhythmic agitation and harmonic stress: whilst the theme with which the instruments introduce the aria is identical with the scourging motive from the recitative! Yet Bach’s music makes a psychological and theological point in that these manifestations of pain are transcended in the length and continuity of the lines. The scourging motive is now sung by a pair of love—viols (viole d’amore—this performance follows a later version which replaces these with muted violins), spiralling in dialogue with the tenor, and musically mirroring the rainbow which, the text tells us, promises peace after the storm. So in the sequence of chorus, recitative, arioso and aria we have assisted at a miracle: have lived through a process whereby the crown of thorns has been alchemized into a rainbow–halo. In these winging melodies we are disembodied: though melodic contours, rhythms and harmonies have all—as we’ve seen—grown out of corporeal movement. The great length of the piece, chronometrically considered, is intrinsic; though a strict da capo aria, it’s a million light years from the baroque opera house. To cut the da capo—as was common practice in the bad old days—is musically nonsensical and theologically sacrilegious.

This identity of corporeality and spirituality, of Flesh and Word, is the quintessence of Bach’s art. Three other examples may be briefly mentioned. First, Peter’s astonishing aria of remorse, 'Ach, mein Sinn' which starts from the physical energy of the baroque dotted rhythm, yet bounces rather than thrusts across the beat, so that his agony becomes also an almost-levitatory ecstasy: such physical and mental frenzy is dramatic at a level far deeper than the conventionally operatic. In the aria, 'Es ist vollbracht' after Christ’s consummatum est, on the other hand, this same ‘baroque’ dotted rhythm becomes an image of physical exhaustion: drooping down the scale, it then flowers upwards through the fifth, the sixth, the seventh, in a gesture of prayer. Finally, consider the opening chorus, which depicts the ‘gathering of the nations’ both to mourn and celebrate Christ’s death. The unbroken semiquavers flow in a motor rhythm that is regular, reiterated, non–developing: un-remittent as the turning earth, continuous as the surging sea. This earth–rhythm moving at about the speed of the pulse, is viscerally rooted in the human body, and is itself an affirmation of faith. Yet over this earth–beat melodic polyphonies float, generating acutely painful, dissonantly suspended seconds on plangently piercing oboes. Again it would seem there can be no divisions between Bach’s awareness of joy, anguish and ecstasy, and the simultaneously linear—harmonic, horizontal—vertical axies of his art is a literal musical synonym for the horizontal–vertical metaphor of the Christian Cross. This is also directly evident in the chorale harmonisation wherein we, the congregation, realise that we need not be like the brutish crowd that is crucifying the man–god, but are at least capable of redemption. The chorale sung after Peter’s aria of remorse is a supreme example, wherein awareness of sin and conscience prompts lacerating harmonic suspensions and weird modulations; yet the music becomes a benediction because each vocal line, making up the dense, tense harmonic texture, is in itself lyrically assuaging. Come to think of it, this is why Bach’s peace ‘passes understanding’; there is nothing to understand in the quietude of a cabbage.

Bach composed the St John Passion in 1724 to further prove his prowess to the burghers of Leipzig. He had got the job, though not until it had been rejected by the more fashionable Telemann. The burghers found Bach’s music hard going: which it is, since it affirms rather than evades the appalling cruelty of life and the scarifying inevitability of death. Yet it is an affirmation, and we feel more alive—reborn—after we’ve been through it. Despite the mathematical complexity of his structures Bach had no truck with musical abstraction and meant his music to be a religious and social act: He defined his art as an ‘harmonious euphony’ for the glory of God and the instruction of his neighbour. Though he wouldn’t have thought of it himself, I think he would have agreed with Blake and Beethoven that Christ is potential in every man; certainly for us his music is precisely this act of discovery and Bach’s historicity, like that of the Cross, is identical with his present reality. After such knowledge, what forgiveness; if our performance is alive (and we’ll be shamed if Bach doesn’t inspire us) we should have some notion of the answer—in heart and mind, blood and bones.