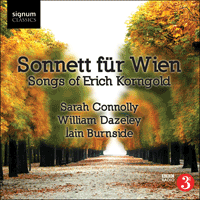 Erich Korngold is perhaps best known as the pioneering émigré composer whose grand orchestral scores defined the sound of film during the golden age of Hollywood. As well as this though, his output for voice in the form of Lieder and Song highlighted the strong bond that Korngold forever held with his homeland and the city of Vienna, a place inextricably linked to the High-Romantic style that Korngold so ably perfected.

This collection of songs and lieder are beautifully performed by Sarah Connolly (mezzo-soprano) and William Dazeley (baritone), accompanied by renowned pianist and broadcaster Iain Burnside.

'Not everyone warms to the music of Erich Wolfgang Korngold, but this excellent selection of songs from his Viennese days, with a couple of examples also dating from his Hollywood heyday, might convert even the sternest naysayer. Iain Burnside accompanies Sarah Connolly and William Dazeley in the many moods of this complicated Wunderkind' (Gramophone)
'Sarah Connolly and William Dazeley respond magnificently to Korngold’s testing vocal lines, with their wide leaps and need for solid legato … Iain Burnside accompanies with his customary insight' (BBC Music Magazine)» More

Erich Wolfgang Korngold, born in Brno in 1897, started his musical life as one of the most astonishing child prodigy composers in history. The son of the music critic Julius Korngold, who was appointed to the influential Viennese newspaper Die neue freie Presse when Erich was four years old, he reaped both early advantage and lifelong psychological trauma from his powerful and controlling father; and despite an illustrious beginning when Mahler himself declared the nine-year-old lad a genius, he ended his days in embittered exile in California, believing himself forgotten.

Korngold was in many ways a victim of circumstance; in other ways, he remains an example of what can go wrong when a great talent is mistakenly pruned. Whether or not one agrees that his disinclination to move with his times musically was detrimental to his career, there is nevertheless no doubt that he possessed an extraordinary instinct for combining music and drama—from his solo songs to movie scores by way of his operas, especially the celebrated Die tote Stadt (1920).

It is in the film world, though, that his reputation has endured most strongly. His music for immortal swashbucklers such as The Sea Hawk, The Adventures of Robin Hood and The Private Lives of Elizabeth and Essex were technically groundbreaking and made him one of the most influential figures in the history of the film score as an independent genre—an influence that is still felt today. Romanticism did not die as the 20th century progressed; it merely migrated to the cinema, largely thanks to Korngold, who regarded his films as ‘operas without singing’ and wove them out of leitmotifs, key symbolism and other techniques deriving from Wagner, Strauss and his own teacher, Zemlinsky.

Like many composers, Korngold was a master of recycling and tried never to waste a good idea. Therefore there is considerable cross-fertilisation between his concert works and his film scores—not least in his copious output of Lieder. Many songs assumed to have been written for film have turned out to date from his earlier days in Vienna—for instance, the Old Spanish Song, which puts in a delicious appearance in The Sea Hawk. Others, like the Sonnett für Wien, take melodies that featured in films and reset them for an utterly different purpose.

A eulogy to the lost world of pre-First World War Vienna, the Sonnett für Wien is Korngold’s last song, dating from 1953. Its theme is a resetting in basically duple time of the soaring waltz tune that graced the score of a movie entitled Escape Me Never, with which ‘turkey’ of a film it had vanished too quickly. The words are an unpublished sonnet by Hans Kaltneker, the poet who had penned the play on which Korngold’s biggest opera, Das Wunder der Heliane, was based. By 1953 Vienna was a shadow of its former self; there, on his short-lived return in 1950, Korngold, formerly such a celebrity, met with little other than cold shoulders.

The Abschiedslieder, with their burnished Mahlerian colours and wide-spun melodic arcs, date from the old Vienna rather than the new. They were written in 1920 when the 23-year-old composer was enjoying his greatest successes in the concert hall and opera house; Die tote Stadt was premiered in December that year. The First World War had left a profound impact on his impressionable psyche. Korngold escaped seeing action in the war; aged 18, he was drafted, but was fortunate enough to be recognised by the doctor in charge of his military medical examination; he subsequently became musical director of his regiment. But in the war he lost a favourite uncle and several friends, as well as seeing the city he loved reduced from the heart of Habsburg Europe to a powerless backwater.

Another, more personal situation fed into the tenderness and sorrow of these songs: Korngold was in love with Luzi von Sonnenthal, a young actress from an important Viennese family of thespians, whom he eventually married in 1924; the match initially met with intense disapproval from both families, though, and for some time the pair were forbidden to see each other. The farewell of Korngold’s title is not only to Vienna but to Luzi, for whom he coined a symbolic ‘signature’ motif that appears in the first song. The Abschiedslieder as a whole bring together disparately written texts on the theme of death, love and farewell, beginning with Christina Rossetti’s famous Requiem. The melody of Mond, so geh’st du wieder auf also appears in Korngold’s Piano Quintet, where it forms the basis of the slow movement.

The three Kaltneker songs Op 18 are among the most complex Lieder in Korngold’s output. Kaltneker’s unpublished play Die Heilige had sparked into life Korngold’s Das Wunder der Heliane—effectively a giant, erotic mystery play, the opera is a post-romantic, expressionistic effort on a scale that exceeds even Schoenberg’s Gurre-Lieder, and Korngold threw into it every harmonic and instrumental invention he possibly could—bitonality, polytonality and mysticism ooze from the gargantuan score in an overwhelming paean to the power of love. Kaltneker’s mystical tendencies are likewise present in these three poems; and Korngold gives his settings a similar mystery, harmonic adventure and richness of texture to that of Heliane, with piano writing that is commensurately demanding.

The unhappy aftermath of Heliane was still haunting Korngold when he composed the Op 22 songs. The opera—the sheer ambition of which, along with its problematic libretto, makes it extremely difficult to perform successfully—had not achieved the acclaim its composer dreamed of, and a rivalry engineered by his father between it and another new opera, Krenek’s Jonny spielt auf, had backfired horribly against Korngold. By 1928, he was furthermore struggling to support Luzi and their two small sons, and had taken a job arranging and conducting operettas for the Theater an der Wien; it was through this that, crucially, he met the theatre director Max Reinardt. His nervousness about revisiting the world of Heliane showed in his decision to adopt a more straightforward language and greater transparency in his music. The exquisite Was du mir bist? is a prime example of this; Korngold’s response to Eleanore van der Straaten’s love poetry ideally suits the words.

It was van der Straaten’s poems that also inspired Korngold’s song cycle, Unvergänglichkeit. With the cyclic nature of the music suggesting the eternally renewed nature of love, its self-contained, direct expression signals a relatively new self-discipline in Korngold’s language—though its brevity also suggests, perhaps, the lack of time for composition that now haunted his hectic schedule. It’s a touching work that benefits from repeated hearing.

Even in his childhood, Korngold adored Shakespeare. He enjoyed considerable acclaim for his Incidental Music to Much Ado About Nothing (1918-19); given his natural gift for correlating music and drama, as well as his famous quick wit, there could have been no finer topic for him. His first effort for Hollywood was the arrangement of Mendelssohn’s incidental music for Max Reinhardt’s ambitious film of A Midsummer Night’s Dream (1934-5); this was the project that first took him to America and brought him to Warner Brothers, which good fortune ultimately saved the Jewish composer and his family from death in post- Anschluss Vienna. And it was no coincidence that some of his best film scores were for movies set in Olde Englande, which he naively expected - knowing nothing of the English language or of American culture - would be redolent of the Immortal Bard.

His Shakespeare Songs Op 31 are settings of poems from Othello, As You Like It and King Lear; the Op 38 Songs of the Clown are all from Twelfth Night. Reinhardt, Korngold’s closest and longestterm collaborator, set up the Max Reinhardt Workshop in Los Angeles in 1937, a studio to train young actors and directors; he and Korngold continued to work together when possible and these songs were among the composer’s contribution to a studio production called Shakespeare’s Women, Clowns and Songs, though some of the Op 31 numbers had been written back in Vienna and were, naturally, recycled.

It is Shakespeare, too, whose sonnet My Mistress’ Eyes finishes the last set of songs on this disc, a richly varied collection that begins with the beautiful Glückwunsch—a lavish Straussian setting of a poem by Richard Dehmel using a melody that appears in the film Devotion (a biopic about the Brontës). The Old Spanish Song appears in The Sea Hawk, but Korngold wrote it at the tender age of 14 in 1911. The Old English Song unsurprisingly shares these filmic associations; and a haunting art song, Der Kranke, portrays the love of life in one who knows he must soon leave it.

Korngold himself was by no means healthy during his Hollywood years; he was massively overweight and depressed through most of the war years. He suffered a severe heart attack at 50 and the threat of illness never really left him. He died at 60 of a stroke. His wit had proved his strongest defence on his complex road—along with his music, which in recent years has enjoyed an extraordinary posthumous renaissance in the concert hall, opera house and recording studio.

“Music is music,” said Korngold, “whether it is for the stage, rostrum or cinema. Form may change, the manner of writing may vary, but the composer needs to make no concessions whatever to what he conceives to be his own musical ideology.” Nowhere is this truer in Korngold’s output than in is songs.