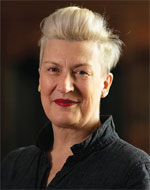 Born in County Durham, Sarah Connolly studied piano and singing at the Royal College of Music, of which she is now a Fellow. She was made a DBE in the 2017 Birthday Honours, having previously been made a CBE in the 2010 New Year’s Honours. In 2011 she was honoured by the Incorporated Society of Musicians and presented with the Distinguished Musician Award. She is the recipient of the Royal Philharmonic Society’s 2012 Singer Award.

She has appeared in recital in London, New York, Boston, Philadelphia, Geneva, Madrid, Paris, Amsterdam, Rotterdam, San Francisco, Atlanta, Stuttgart; at the Incontri in Terra di Siena La Foce and the Schubertiada Vilabertran and at the Aldeburgh, Cheltenham, Edinburgh and Oxford Lieder Festivals. In the 2018/19 season she curated a Residency at Wigmore Hall. Her many concert engagements include appearances at the Lucerne, Salzburg, Tanglewood and Three Choirs Festivals and at the BBC Proms where, in 2009, she was a memorable guest soloist at The Last Night.

A prolific recording artist, her many discs include Purcell’s Dido and Aeneas (OAE); Des Knaben Wunderhorn (L’Orchestre des Champs-Élysées/Herreweghe – winner of an Edison Award); Brangäne Tristan und Isolde (LPO/Jurowski); Elgar’s Sea Pictures and The Dream of Gerontius (BBC Symphony Orchestra/Sir Andrew Davis – winner of a Gramophone Award); Britten’s Phaedra (BBC Symphony Orchestra/Gardner) and Mendelssohn’s Elijah, Mozart’s Mass in C Minor and Haydn’s Scena di Berenice (Gabrieli Consort/McCreesh). Her roles on DVD include Giulio Cesare, Nerone, Clairon and Purcell’s Dido. Her recording of Handel arias with The Sixteen and Harry Christophers was described as ‘the definition of captivating’ and her three solo recital discs, The Exquisite Hour, Songs of Love and Loss and My true love hath my heart have all won universal critical acclaim.