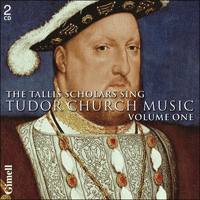 "Of all the polyphony we have recorded, this early English style with its dazzling high treble parts and luminous sonorities is, for me, as good as it gets. Henry VIII would have known this sound from childhood and may well have included some of the music recorded here at his Coronation." (Peter Phillips)

‘This collection would make a formidable weapon in the armoury of any early music evangelist. Many of the greatest sacred works of the English Renaissance are included here, and surely the intention in making this compilation was that this should become the gold standard performance’ (Early Music Review)» More
‘The Tallis Scholars are releasing these two two-disc sets to celebrate [the 500th anniversary of the coronation of King Henry VIII], full of some of the finest Tudor music ever composed, though each and every one is a re-release of previous material … well worth the investment if you don't already have the duplications’ (Audiophile Audition, USA)» More
‘Here is such a wealth of beautiful music here, excellently performed and recorded’ (MusicWeb International)» More

English sacred music of the sixteenth century has formed the backbone of everything The Tallis Scholars have done, right from the beginning. The original reason why we chose to have ten core singers in the group was because the English composers of this period had developed a choir with five basic voice-ranges, instead of the more normal four, and I had decided that the dazzling sonorities inherent in their writing benefitted from having two singers on each part. This dazzle is emphasized if the music is sung at a high pitch, which led us increasingly to perform with four sopranos – two high and two lower – above two countertenors, two tenors and two basses. Thus was born the classic Tallis Scholars line-up, which later could be adapted to sing much mainland European renaissance music as well. Such a line-up sounds almost inevitable now, but it wasn’t in 1973.

The two CDs in this volume contain some of the most substantial music written anywhere in Europe in the early years of the renaissance; and they show just how different English music was from what the Franco-Flemish composers had developed on the Continent. Instead of an inward-looking, contemplative mood, there is extrovert, brilliant writing. Instead of melodic lines which tend to move by step, chant-like, there are leaps and jumps so virtuosic that they rival the coloratura writing of solo vocal music from centuries later. Where Josquin has a reliably developing harmonic background, Browne sets down massive chords which change slowly, allowing the upper voices to festoon them with ornaments. Looked at historically the English composers of this period can almost be classified as ‘late medieval’ for their archaic compositional practices and quirky scorings, yet the sound world they created is one of the most identifiable and compelling of all time. Once the listener is hooked on these sonorities nothing else ever seems quite so good. The second volume of The Tallis Scholars sing Tudor Church Music shows how this characteristically English sound developed in the high renaissance, a picture which is amplified and brought to a conclusion in The Tallis Scholars sing Thomas Tallis and The Tallis Scholars sing William Byrd.

There is no better place to start in illustrating pure sonority than with the music of John Browne (d.1505). The sheer length of these five antiphons shows that something unusual is happening; and then one notices the scorings, each different from the last. It seems that once Browne felt he had squeezed every last nuance from a sonority, it was time to try a new one. The largest in every sense is the eight-voice O Maria salvatoris (TrMAATTBB). This is backed up by three six-voice compositions, all for different groupings: Stabat iuxta (TTTTBB), O regina mundi clara (ATTTBarB), and the Stabat mater (TrMAATB). The most ‘normal’ is the five-voice Salve regina (TrMATB). All the pieces come from the Eton Choirbook, in which Browne was given pre-eminence: O Maria salvatoris, the only eight-voice composition in the volume, opens it.

The Salve regina and the Stabat mater are the pieces which for years have maintained Browne’s reputation as a composer. They are both highly expressive, though for many commentators the Stabat mater is the supreme masterpiece of the period, contrasting dramatic writing with contemplative passages in an emotional world of contrasts thought to have surfaced first with Monteverdi. This drama famously breaks through the surface at the word ‘Crucifige’, which Browne hammers into place before turning inwards again with the phrases which follow: ‘O quam gravis illa poena’ (‘O how bitter was your anguish’).

For me, however, the piece which sums Browne up most perfectly is the Stabat iuxta. Its scoring (TTTTBB) has probably militated against frequent performances, but it is just that scoring which makes such an impact. With six voices operating within a compass of less than two octaves the opportunities for dense, almost cluster chords are unrivalled. The use of low thirds in chordal spacing is not encouraged by text-books of correct polyphonic procedure, but Browne simply couldn’t avoid them with this scoring, and they are thrilling. Density of sonority leads to other delights, like false relations and other dissonances, which characterize much of the piece and culminate in the final bars.

William Cornysh’s four-voice Gaude virgo mater Christi (AATB), also in the Eton Choirbook, is a brief example of the genius of a very different composer, a kind of alter ego to John Browne. Where Browne was inward and at times mystical in mood, Cornysh was typically extrovert and clear-textured. In Gaude virgo he sends his four low voices rushing around with characteristic verve, towards the end employing strict imitation between them at the resonant words ‘Mortis in periculo’. On the second CD in this volume there are two more pieces by Cornysh: the ineffable Salve regina, one of his grandest and at times most theatrical conceptions, and the more modest and purely beautiful Ave Maria, mater Dei, a concert favourite of ours. The miracle of the Salve regina is how Cornysh never lets the momentum sag over such a broad canvas, constantly alternating powerful trios between the lower voices with more luminous sections involving the higher ones. All this culminates in a rhapsodic passage in praise of the Virgin, building unforgettably to the final word ‘Salve’. Never was Cornysh’s dramatic sense more tellingly on display.

The remainder of the music in this volume is made up of two of the three Western Wind Masses – those by John Taverner (c1490–18 October 1545) and Christopher Tye (c1505–before 15 March 1573). The third one – by Sheppard – is included on The Tallis Scholars sing Tudor Church Music Volume Two, where a whole disc is dedicated to the music of John Sheppard. Together these three Western Wind Masses make a unique set. Not only was there no other example in English renaissance music of a linked series of Mass compositions by different composers, there was also no precedent in English composition for a Mass based on a secular tune. If Taverner’s was the first of this set to be written, it was breaking important new ground, probably deliberately emulating the justly famed continental Mass-settings on such popular songs as L’homme armé and Mille regretz. Tye and Sheppard then took up the challenge of turning Taverner’s initiative into a Continental-style series. From the listener’s point of view the linking is both obvious and satisfying since the three settings use the same unusual four-part scoring of treble, mean, tenor and bass; and the Western Wind melody, beautifully tuneful in itself, is almost always audible within the polyphony.

It is always assumed that Taverner’s setting was the earliest, and that the other two were written to complement it. Certainly it is the most inventive, using the melody thirty-six times in all and treating it as the scaffolding for a set of variations. These variations were written without any free passages in between the quotations of the melody, nine variations in each of the four movements. Twenty-one of the statements are in the top part (where they are at their most audible), ten in the tenor and five in the bass. The melody is never used as a traditional cantus firmus. The end result is that the Taverner version is the most varied and the most sectional of the three, the beginning of a quotation almost always bringing with it a new scoring and new figuration. It is for this reason that tribute is paid to Taverner’s resourcefulness in inventing these figurations and their counterpoints – he came up with well over thirty of them, each one adding something to one’s appreciation of the melody itself.

The one thing Taverner did not do was put the melody in the second voice down – the mean. It was surely to fill out the scheme, and to pay a kind of homage, that Tye put the melody in the mean only. Keeping it in one part made it easier for him to elide the quotations, as happens at the very beginning where three statements run into each other. This in turn means that Tye’s setting is more homogeneous than Taverner’s, though also more virtuosic, for example at ‘Benedictus’. In this, and in some truly bizarre harmonies elsewhere, one has the sense that Tye, like his contemporaries White and Sheppard, was searching for new expressive options. They did not look to Europe to find them.