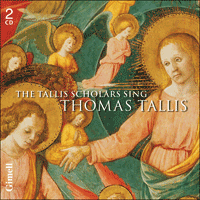 Including Spem in alium as featured in Fifty Shades of Grey. The author, E L James, said: 'I am delighted to have introduced so many of my readers to this amazing 16th-century piece of music, it is absolutely wonderful and the recording from The Tallis Scholars is particularly special. A deserved number one!!'

The supposed birth of Thomas Tallis in 1505 – the date is largely conjectural – gives us the last opportunity to celebrate him for many years. By 2035 – the 450th anniversary of his death in 1585 – one guesses the scene may be rather different. So I feel encouraged to feature our eponymous composer’s work in the concerts we shall give during the 2004/5 season, and to release an anthology of the music we have recorded. It is perhaps worth recalling that The Tallis Scholars launched their career in London with four all-Tallis concerts in 1977/8; and made their English Anthems recording, much of which is included here, in 1985, alongside anniversary concerts in the Wigmore Hall, the Queen Elizabeth Hall and the Utrecht Early Music Festival.

My view of Tallis’s genius has only deepened with time. Not only was he the arch-survivor but also, unlike those who trim and so build their monuments on shifting sands, he had the ability to create masterpieces in whatever style was the currency of the day. This should not be underestimated, because those styles changed out of recognition during his eighty-or-so years. First it was the traditional Catholic style of Henry VIII’s reign; then it was the most severely chordal Protestant style of Edward VI’s reign; then it was back to Latin and Catholic writing again under Mary, though this time in a more mature idiom than in Henry’s reign – Tallis was by now turning fifty; then it was the compromise style for Elizabeth whom he served for twenty-six years and who left him sufficiently alone for him to produce some of his greatest music.

It was not considered desirable on these two discs to present Tallis’s music according to any chronological sequence, but the four styles outlined above can be followed clearly enough. Disc 1 starts with the exception to every rule – indeed so outstanding is Spem in alium that it still seems impossible that one mind without a computer could have managed it. To write for forty voices which do not repeat themselves in consecutive motion and not to lose control of the whole colossal edifice, is to set a challenge which even the Art of Fugue scarcely rivals. The actual compositional style of it is slightly blurred between those characteristics implied by stages three and four above – sometimes imitative between (some of ) the parts, sometimes setting the text syllabically, never dealing in the unrestrained melismas of much of his purest Catholic music – and so it is not fully established whether Tallis wrote it for Mary or Elizabeth (both of whom celebrated their fortieth birthdays whilst on the throne) or for some more abstract reason, perhaps to do with the Biblical number 40. But for us in our modern terms, as for Tallis himself, Spem remains the ultimate technical challenge – supremely difficult to bring off, supremely rewarding when one comes near.

Sancte Deus is a classic example of Tallis’s first style, illustrating what I mean above by ‘unrestrained melismas’. A melisma is a melodic line which only uses one syllable, like the ‘A’ of Amen, allowing the composer’s imagination to ﬂy free of text-setting. This essentially abstract way of thinking was admired by the pre-Reformation Catholics, and needless to say was particularly objected to by the Protestants. The Salvator mundi settings (the second much less famous than the first) were Elizabethan and so more compact; but Gaude gloriosa is one of the most elaborate Catholic compositions of the entire period. Unlike Spem it is colossal in length rather than height, using the nine exclamations of ‘Gaude’ in the text to work up a construction which is essentially architectural. The music ﬂows from one scoring to another to yet another, never using more than six voices at any given moment, but with such an exquisite control of melody and sense of overall direction, that the final pages feel as if the listener has just completed the journey of a lifetime. It comes as no surprise that Gaude gloriosa was inﬂuential – William Mundy based his Vox patris caelestis on it – and would have been more so if the Catholic style hadn’t been so soon overturned by Elizabeth’s accession.

The seven-voice Miserere nostri is both a demonstration of technical skill, and, in its music of the spheres way, possessed of an unearthly beauty. It is a canon six in two with a free tenor, which is to say there are two canonic melodies, one sung by the two top parts which is easily audible, while the other is shared between four of the other voices. This second canon has its four contributors starting at the same time, but going off at different speeds (the first countertenor has the model melody which the second countertenor sings in double augmentation, the second bass sings this melody inverted and augmented and the first bass has it inverted and in triple augmentation). Both this piece and Loquebantur variis linguis are scored for SSAATBB and are probably Elizabethan.

All the remaining pieces on the first disc were written in Tallis’s second period – for the Protestants of Edward VI’s reign. Nothing could be further removed from the glories of Spem or Gaude gloriosa. Gone are the melismas, the Latin texts, the interweaving of the lines in polyphony. The accent was now on simplicity and comprehension – hence the English texts and the chordal style, which was designed to make the words audible. One may think one knows what Tallis must have thought of this clipping of his wings, but at least he was not a man to sulk. His craftsmanship enabled him to adapt swiftly to the new realities and in a matter of a year or two he wrote some of the best-known and best-loved Anglican music there has ever been. Not all these tiny masterpieces are as famous as If ye love me, but they all bear repetition, as Vaughan Williams thought when he based his Fantasy on a Theme of Thomas Tallis on the third Tune for Archbishop Parker (part of track 15).

Disc 2 is made up entirely of Latin-texted music from the first and last periods listed above – from the reigns of Henry VIII and Elizabeth I – apprentice works in the style of Tallis’s immediate predecessors alongside some of his maturest thoughts in old age. Tracks 1 to 5 are from Elizabeth’s reign, tracks 6 to 8 from Henry’s.

Nowhere is Tallis’s mature style more perfectly on display than in his two sets of Lamentations, which in modern times have been the yardstick by which every set of Lamentations of the period is judged, whether English or from the Continent. As was standard, Tallis divided his settings between the Hebrew letters which preface each verse of the text in the Bible, and the lament itself. Although Tallis’s Lamentations I and II are stylistically identical they are in different modes, which strongly suggests they were not intended to be sung together.

The next three pieces are beautiful examples of Tallis’s late style, with O sacrum convivium perhaps the most renowned. In each case he took the prevailing Flemish technique of imitative entries between the voices, built up a full sonority as each voice joined in, and then moved on to the next phrase of words and the next set of entries. It is a transparent idiom in which the words are set more or less syllabically – thus fulfilling the Protestant need for clarity – yet the music is allowed to expand and breathe.

The last three pieces show Tallis learning his trade. The obvious influence here is John Taverner, though in the background one can hear the music of Robert Fayrfax, John Browne and William Cornysh. Salve intemerata is Tallis’s longest single-movement piece. Though it lacks the contrasts and sheer verve of Gaude gloriosa, it shows the same instinctive grasp of musical architecture, whose bricks are melodic lines of memorable fluency and grace. Of all the Tudor composers, one comes away from a big Tallis piece humming the tunes. By keeping strictly to the Phrygian mode throughout this colossus (except once in the ‘Amen’), Tallis gave himself no harmonic place to hide, and so was obliged to develop his melodic sense. The same is true of the very early Magnificat (which does creak a bit here and there – Tallis never revisited such banal moments as the downward scale at ‘et sanctum nomen eius’) and Ave, Dei patris filia, which was probably written in the 1530s. The obvious influence on this piece is Robert Fayrfax, whose own setting of the text formed a model for Tallis. Indeed, so closely did Tallis follow Fayrfax that David Skinner, who recently discovered enough new source material to make the piece reconstructable, was able to decide where to add missing parts by copying the layout of Fayrfax’s piece. Even if Tallis was no more than thirty when he wrote Ave, Dei patris filia, it includes some of his finest phrases, for example ‘semper virgo Maria’ just before the ‘Amen’. To go from this to the stark directness of If ye love me, to the soaring phrases of Gaude gloriosa, to the compact, refined world of the Lamentations and O sacrum convivium, to the simply incredible sonorities of Spem in alium is to travel as far as one man can ever have taken his listeners. Living a long time does not in itself explain how Tallis did it.