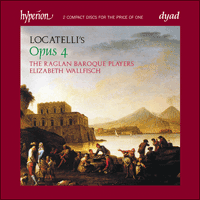 Locatelli’s Op 4 in fact consists of two quite distinct sets of pieces, six Introduttioni Teatrali and six Concerti. It is not clear whether the title of the ‘theatrical introductions’ should be taken literally, but certainly the works are composed in a striking manner such as would be expected for an overture fighting to catch the attention of a restless audience.

The second half of the set consists of six concertos whose rhapsodic character contrasts with the carefully structured style of the Introduttioni. These works have differing numbers of movements and Locatelli exploits this greater freedom to include a wide range of virtuosic motifs and textural experiments.

‘The Raglan Baroque Players and Elizabeth Wallfisch are doing great service to the music of Locatelli. This excellent band … seem to revel in the fertile invention and sheer ebullience of the music, making it spring to life from the printed page. I found myself effortlessly carried along by the exuberance of Wallfisch's direction and the lively response of the players. An invigorating release’ (BBC Music Magazine)
‘There is simply no better introduction to the music of Locatelli than [this] superbly invigorating collection’ (The Penguin Guide to Compact Discs)
‘Once again a Raglan triumph … given these excellent performances I've a hunch that Locatelli has a fighting chance to make the composers' Premier League’ (Classic CD)
‘Locatelli's many strengths are well displayed in this latest offering from his leading contemporary advocate … spectacular effects and beautiful, almost classical, cantabile melodies. Wallfisch and her Raglan colleagues play with imagination, flair and technical precision and they are well served by a beautifully atmospheric acoustic’ (Soundscapes, Australia)
«Superbe interprétation» (Diapason, France)

'Locatelli must surely be allowed by all to be a Terre moto … Mais pourtant, Messrs, quels Coups d’archet!, Quel Feu! Quelle Vitesse! … He plays with so much Fury upon his Fiddle, that in my humble opinion, he must wear out some Dozens of them in a year.'

His Op 4, published by Le Cène in 1735, in fact consists of two quite distinct sets of pieces: six Introduttioni Teatrali and six Concerti. The scoring is for the following ensemble (according to the reading of the title-page): ‘Violino Primo, Secondo, Alto e Violoncello, Soli. Violino Primo, Secondo, Alto, e Basso, Ripieni’. The volume is dedicated to one of Amsterdam’s richest merchants, Abraham Vermeeren, referred to as a ‘lover of music’. Vermeeren would also appear to have been an active member of a Collegium musicum, for at his death his estate counted various instruments including an extremely precious harpsichord.

Little is known of the genesis of the Introduttioni Teatrali. In particular, it is unclear whether they were born as independent pieces or whether they actually served as musical introductions to operas, ballets or even plays. Even the dating is obscure, though, on the assumption that they were composed at one of the major opera centres with which Locatelli came into contact during his travels, they are unlikely to have been written before the 1720s. In this regard it is also worth bearing in mind that the composer’s house in Amsterdam was close to the city theatre (Stadsschouwburg). It is quite conceivable, therefore, that he established some form of contact with the theatre, particularly through his friend Cornelis Troost, the painter and actor. If so, these works could date from the first half of the 1730s.

Stylistically, the six Introduttioni have consistent features: in form they adopt the three-movement plan of the Neapolitan opera overture (fast–slow–fast). The instrumentation, however, is that of the concerto grosso; in other words, a group of soloists (the soli or concertino) pitted against—or accompanied by—a second ensemble (the ripieno). In the present case the soli almost always play in unison with the ripieno and rarely have a genuine solo role; their function is therefore simply to lighten the orchestral texture and create striking effects of chiaroscuro.

The first movements are particularly important. After all, in the days before ‘curtain raising’ the overture signalled the beginning of a theatrical spectacle and was designed to capture the attention of what was generally a somewhat noisy and undisciplined audience. The distinctive stylistic traits of these opening bars were therefore concision, tuneful melodies, vigorous rhythms and brilliant sonorities in a fanfare style reminiscent of wind-instrument writing. In musical terms this meant major keys and characteristic figuration (including arpeggios, scales, triadic sequences and broken chords). A particularly vivid example is the opening of the fourth Introduttione, where rapid scales on the violas, cello, and bass act as a background to broad quadruple stopping on the violins. Equally splendid is the beginning of the fifth Introduttione, where the exhilarating opening motif consists of a descending arpeggio figure in canon.

The central movements provide a contrast, tempering the excitement and introducing softer and more beguiling atmospheres. Generally in a minor key, their essentially cantabile idiom owes much to opera, compounded with an element of galant ‘affection’ through copious recourse to trills and appoggiaturas (at times provoking bold harmonic clashes). Typical ingredients are the languorous sequences in thirds and sixths, dotting and reverse dotting, and the reiteration of melodic and rhythmic cells, producing highly polished melodies always rich in surprises. A particularly emblematic case is the Andante of the sixth Introduttione with its majestic sighing figuration.

The final movements, which signal a return to the brilliance of each opening movement, are nonetheless distinguished by the more sprightly pace of ternary metre. They are written in the characteristic binary form (with repeats) of dance movements.

In short, the Introduttioni originated as a mixed genre, a composite of the Italian opera overture and the concerto grosso. They generated an independent form which—as one would expect at that date—was as yet under no pressure to establish psychological or musical links with the theatrical spectacle to follow (if indeed anything did follow).

The second half of the Op 4 (Nos 7 to 12) consists of six concertos, whose rhapsodic character contrasts with the more carefully structured style of the Introduttioni. The inclusion of these pieces in the same volume invites speculation. Did Locatelli incorporate this group of works simply because he considered it worthy of publication, despite the evident inconsistencies of style? Or were the pieces intended as some kind of fitting conclusion to the volume of Introduttioni? Or again, can their presence be explained by a specific commission from the Collegium musicum? At present these questions have no satisfactory answer.

Though the six concertos use the characteristic concerto grosso scoring, the elements of eclecticism and sheer ostentation are so numerous as to create novel structures in their own right. On the whole, the seventh and ninth concertos are orthodox in their treatment, but the eighth, subtitled ‘à immitazione de Corni da Caccia’ is distinctly unusual. In the opening Grave (followed without a break by a Fuga) and in the subsequent Largo each of the soli plays in unison with the corresponding ripieno part. The last two movements (Vivace and Allegro) modify this pattern by introducing elements that unquestionably derive from the solo concerto, and the first violin of the concertino assumes a dominant role. The solo episodes feature the horn imitation mentioned in the subtitle, double-stopping suggesting the use of two distinct instruments. The tenth concerto (‘Da Camera’) is a reworking of material from the sixth sonata of Locatelli’s Op 8 (though the latter work was actually published nine years later; see Hyperion CDD22057). It is in three movements: a maestoso Adagio in the Corellian mould followed by an Allegro and rounded off by a Minuetto and seven variations. The minuet theme itself is of only slight intrinsic interest, but its simplicity is not without elegance and it provides the framework for a sequence of variations that alternate between affectionate refinement and impulsive vitality. Of particular note is variation 5, during which the strings are asked to play pizzicato on muted strings. The contrast between the subdued atmosphere of this passage and the whirl of impassioned sound enveloping the listener in the last variation is truly spectacular. The full title of the eleventh concerto (‘à 5. Da Chiesa’) refers to a scoring and style that were already obsolete by the time the volume was published. Indeed it is the only concerto to be written in five parts: two violins, two violas and the ripieno bass. The collection closes with a concerto for four obbligato violins, though in fact the first violin of the concertino is practically speaking quadruplicated: the four instruments exchange identical material, paired off in unison or thirds. It is not unlikely that this piece was inspired by the tenth concerto in Vivaldi’s L’Estro Armonico, where similar procedures are applied.

Chronologically, the Op 4 follows shortly after the publication of Locatelli’s L’Arte del Violino, Op 3 (1733), the set of solo concertos widely acknowledged as the composer’s spiritual testament: works which elevate violin writing to hitherto uncontemplated heights of virtuosity and look boldly to the future, to the extent that Locatelli may be legitimately viewed as the most direct precursor of Paganini himself. Much of the virtuoso expertise displayed in that volume also finds its way into the Op 4 collection. Two features particularly stand out: the fine shaping of the ornamentation in the slow movements and the care and precision (exceptional for his day) with which the dynamics, articulation, and phrasing are marked. But equally important are the manifest signs of the formal innovator, of a composer experimenting with genres, shaping new forms and exploiting the combined potential of the concerto grosso and solo concerto.