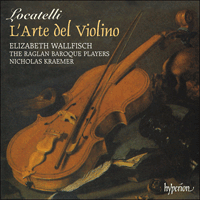 Without a doubt, Locatelli’s L’Arte del Violino (‘The Art of the Violin’), printed in Amsterdam in 1733, was one of the most influential musical publications of the early eighteenth century. It is a collection of twelve concertos for solo violin, strings and basso continuo, with a ‘capriccio’ for unaccompanied violin inserted into the first and last movements of each concerto as a sort of cadenza.

Pietro Antonio Locatelli was born in 1695 in the small North Italian town of Bergamo, and was probably taught locally. Following brief employment at the Basilica of Santa Maria Maggiore in his home town, he travelled in the Autumn of 1711 to Rome, presumably in the hope of continuing his studies with the great Arcangelo Corelli. It is doubtful whether Locatelli ever actually took lessons from the master, who was already very ill in 1712 and died in January 1713. It is more likely that the young Locatelli was taught by the violinist and composer Giuseppe Valentini, of whose leaning to virtuosity there is documentary evidence. Locatelli worked with him for some time as a chamber musician in the household of a Roman aristocratic family, the Caetani. He seems to have left Rome in 1723, but reappeared in the Autumn of 1729 as a permanent resident of Amsterdam where he lived comfortably without any employment until his death on 30 March 1764. All his works were published in Holland.

The years between his departure from Rome in 1723 and his settling in Amsterdam in 1729 were years of travel when the virtuoso journeyed from court to court and town to town. We find him at courts including those of Mantua, Munich, Dresden, Berlin and Kassel, where he was greatly admired on account of his consummate skill on the violin. His impressive artistry even enabled him to take liberties with crowned heads which bordered on impudence.

Apparently Locatelli was in Venice some time between 1723 and 1729, as he recalled in 1733 when he dedicated the edition of his L’Arte del Violino to the Venetian patrician Gerolamo Michiel Lini. In the dedicatory preface Locatelli thanks the dedicatee because he ‘was so gracious as to come to listen to and praise [the concertos] when they were performed by that distinguished and incomparably large orchestra in those famous church services’. A performance of L’Arte del Violino in a liturgical context may well be assumed from the occasional direction ‘organo’ in the basso continuo part. ‘Famous church services’ are primarily associated with the Basilica of Saint Mark; there is evidence that in the seventeenth and eighteenth centuries extensive use was made of instrumental music during the Mass, namely after the Epistle (gradual), during the Elevation and during Communion. During the 1720s Locatelli, with his experience of conditions in Rome, cannot seriously have considered a permanent orchestra of some twenty string players ‘incomparably large’, but it was not uncommon to bring in additional players for particularly important occasions. There are, however, no traces of any such performance by Locatelli in the surviving documents of the Basilica.

L’Arte del Violino is one of the so-called ‘art books’ (as was, for instance, Bach’s Art of Fugue) which proliferated in the seventeenth and eighteenth centuries. This is no textbook, nor a volume of musical pieces systematically arranged according to ‘problems’ in the manner of studies, but a collection of twelve independent musical works which together present the panoply of technical possibilities of the violin. Obviously this means first and foremost what was technically possible for Locatelli—and at that time probably for no one else!

In L’Arte del Violino we encounter the virtuoso par excellence—the type of musician who concentrates on making the maximum impression, who wants to be seen and admired, the performer and his outstanding technical prowess being the centre of attention. Surviving documents confirm this. At the Berlin Court, Locatelli appeared before the King of Prussia in a blue velvet coat embroidered with silver thread, with precious diamond rings and bearing a sword; he was not prepared to accept small fees. According to some English aristocrats who encountered Locatelli in Amsterdam in 1741, he was a ‘terremoto’ (an earthquake). He played the most difficult pieces with exceptional composure, never removing his coat—although he always performed standing up, sometimes for three hours at a time, with so much passion that he wore out a dozen bows a year. Apparently he never played out of tune; he used a short bow because he believed that no violinist need play with a long bow anything that he could play with a short one. According to a contemporary report he so dazed a canary by his playing of an Adagio by Corelli that it fell from its perch. Other sources describe Locatelli’s tone as coarse.

L’Arte del Violino and the documents concerning Locatelli’s life paint in every particular the picture of a virtuoso which did not become familiar until the beginning of the nineteenth century. After the publication of L’Arte del Violino in 1733 it became the task of the international brotherhood of violinists to bridge the gap between the technique of the average player and the standards set by Locatelli. He had a great influence on French music, in which the first great technical developments occurred. It cannot be proved that Paganini knew Locatelli’s Capriccios, but certain resemblances (perhaps even the number 24) between the two sets make it very likely. Without Locatelli’s contribution many developments in violin technique would hardly have been conceivable. L’Arte del Violino was a significant catalyst in the musico-historical developments which led to the first half of the nineteenth century becoming the age of the virtuoso concerto.

But beyond that, L’Arte del Violino also has attractive music to offer, in spite of the uneven quality of the Capriccios. The Concertos normally have three movements arranged fast–slow–fast. The fast movements frequently adopt the Vivaldian form of alternating soli and tutti. The Capriccio for unaccompanied violin always appears before the last ritornello, indicating a relationship with the cadenza. After the Capriccio Locatelli prescribes another cadenza, to be improvised by the soloist, as a transition to the final ritornello. The Fondazione Pietro Antonio Locatelli, which is preparing a complete edition of Locatelli’s works, made available for this recording photocopies of recently discovered manuscript cadenzas, written in 1743 by the Mainz-based violinist Gottfried Dominicus Reber. With these cadenzas from Locatelli’s own time, the maximum amount of historical information was made available for this recording.