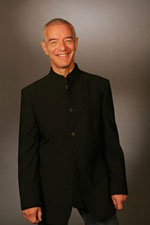 His concert engagements take him all over the world, a recent high-light being his début with the Berlin Philharmonic conducting Handel’s Belshazzar. He enjoys close ties with the Scottish Chamber Orchestra, Northern Sinfonia, City of London Sinfonia and regularly performs with the BBC National Orchestra of Wales, St Paul Chamber Orchestra, Grant Park Festival, Chicago and Orchestra Ensemble Kanazawa. His other engagements have included appearances with the Rotterdam Philharmonic, Philharmonia Baroque, Kioi Sinfonietta, the City of Birmingham Symphony Orchestra and Birmingham Contemporary Music Group.

Nicholas conducted at Glyndebourne from 1980-83 and was the first musical director of Opera 80, now English Touring Opera. His opera repertoire ranges from Monteverdi to Strauss and Britten and opera engagements have taken him to Paris, Lisbon, Amsterdam, Geneva and Marseilles. He conducted The Magic Flute for English National Opera.

His recordings include several discs of Vivaldi Concerti with City of London Sinfonia, Handel’s Rodelinda and works by Thea Musgrave with the Scottish Chamber Orchestra. He has contributed to several feature films most notably as Baroque Music Director for the Oscar-nominated The Madness of King George.