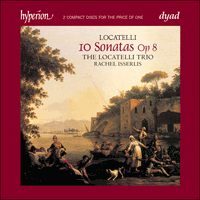 This set of ten sonatas was published in Amsterdam in 1744. Six are scored for violin and continuo while the remaining four feature an additional solo violin.

‘This is amazing violin playing of a kind of virtuosity I do not recall hearing from a period instrument player … no one who admires good violin playing will want to miss Elizabeth Wallfisch's crisp, rhythmic playing, her precise articulation or her impeccable intonation, or indeed her general command of the style and expressive content of this music’ (Gramophone)
‘Wallfisch invests every phrase with tingling, exuberant life’ (BBC Music Magazine)
«Les timbres rayonnants et les phrasés soignés d'Elizabeth Wallfisch et Rachel Isserlis réchauffent et enveloppent» (Diapason, France)

Pietro Antonio Locatelli (born in Bergamo, 1695, died in Amsterdam, 1764) settled in the Dutch capital in 1729, following a period of apprenticeship spent first in Italy (Bergamo and Rome, the city that witnessed the triumph of Corelli’s style) and then at some of the principal courts of Europe. For the remaining thirty-five years of his life he was never to move from the Dutch capital. His Opus 8, X Sonate, VI a violino solo e basso e IV a tre (1744), was printed at his own expense in Amsterdam, the home of the most flourishing music publishing businesses of the age.

A few years after his arrival in the city he began a period of intense publishing, issuing as many as seven volumes (Op 2 to Op 8) over a twelve-year period (1732 to 1744). But while he himself supervised and financed the printing of his chamber works, for the concertos he resorted to the leading contemporary specialists: Roger, Le Cène and Van der Hoeven. As regards his other works, the Op 1 was also printed in Amsterdam (by Roger), though this some years previously (in 1721, when the composer still resided in Italy); while publication of his last work, the Op 9 (of which not a trace has survived), was announced in 1762 by Covens. The Op 8 thus marks the end of a long and uninterrupted run of publications, to be followed by an even longer – and not so easily explained – silence lasting about eighteen years.

The Op 8 stands out from the rest of Locatelli’s published oeuvre – and also from contemporary music production in general – both in the timing of its appearance and in the presence of certain distinctive formal and stylistic features.

The most conspicuous peculiarities of the set are the number of pieces included (ten) and the mixing of genres (violin sonatas and trio sonatas), an arrangement that clashed with the widespread contemporary practice of publishing either six or twelve pieces of the same musical genre. The mixing of genres may possibly be explained by Locatelli’s desire to issue a series of works that had been left unpublished: the left-overs, as it were, of a larger and more homogeneous production. And in view of the short lapse of time in which the corpus of works from Op 2 to Op 8 was published, it is hardly surprising that some of the pieces included were written long before the actual date of publication.

What immediately prompted Locatelli to issue the Op 8 may have been the desire to collect a series of pieces specially tailored to the needs of a particular individual, dedicatee or group. It is a well-known fact that members of the aristocracy and rich bourgeoisie liked to consider themselves as integral parts of the cultural – and particularly musical – life of the great European cities. They achieved this not only by commissioning works of music (the dedications of which granted them an adequate return in lustre and esteem), but also, in many cases, by playing a more active role: engaging in amateur performances at the fashionable drawing-rooms. Locatelli’s Op 8 may well, therefore, be a collection of pieces adapted to the taste and skills of just such a public, rather than those of its actual dedicatee: a certain Abraham Croock, a wealthy Amsterdam gunpowder merchant about whom we have no evidence of direct involvement in musical activities (except for another dedication, that of XII Sinfonie a quatro stromenti (c1739) by Anton Wilhelm Solnitz, a Bohemian composer active in Holland). In short, Locatelli, an astute publisher, was doubtless well aware of the wide appeal – and saleability – of such a collection among the prosperous classes of Amsterdam.

The composite nature of the set is reflected not only in its overall plan but also in the style of the individual sonatas. The Sonate a violino solo, in particular, display contrasting features. On the one hand, we note the residues of both Corellian form (the organization into four movements, beginning with a slow one) and compositional style (the melodic shaping of the initial Cantabile movements). On the other, there is a tendency towards elements of greater modernity, such as the adoption of a three-movement plan and the prevalence of homophony. The use of homophonic textures, in particular, enables the top part to stand out against an accompanying bass, thus making the solo sonata an ideal genre for Locatelli (who, after all, was acclaimed throughout Europe as a brilliant virtuoso performer before he made his name a composer). The solo sonatas of the Op 8 also consolidate some of the innovative compositional procedures used in some of his previous works: in particular the blurring of the distinction between the sonata da camera and sonata da chiesa (one of the hallmarks of Corellian form). In its place there emerges a more neutral form of sonata da camera with a tendency to exclude both the fugato movements (of the preceding sonata da chiesa) and the dance movements borrowed from the suite (of the sonata da camera). Many of these innovations, however, had already been established in the Sonate a flauto traversiere e basso, Op 2 (1732), and the Sonate a violino solo e basso, Op 6 (1737).

Of the six Op 8 violin sonatas, four are in three movements and two in four. All begin with a slow introductory movement, followed by faster movements. The only exception is Sonata VI, which closes with an Aria di minuetto and eight variations and constitutes the high point of virtuosity in the whole collection. Though the piece betrays the typical traits of Locatelli’s most flamboyant style (leaps across strings, high positions, passages of rapid note values, staccato, etc), the virtuosity is on the whole less pervasive than in the Op 6.

The trio sonata genre was not one that greatly engaged Locatelli’s attention as a composer, despite the existence of a complete set dedicated to it: the Op 5 (Sei Sonate a tre, o due flauti traversieri, e basso per il cembalo, 1736). By the time the Op 8 was published the trio sonata no longer enjoyed the vogue of the previous decades when, on the strength of the Corellian model, it had crossed the Italian borders and met with such widespread popularity in the rest of Europe. Nonetheless it continued to be important in two respects: first, as a genre eminently suited to amateur and drawing-room performance (perhaps more so than the solo sonata, for it gave small groups of instrumentalists the opportunity to play in varying formations); secondly, it gradually came to be considered as a kind of exercise and testing ground for composers to show their mastery of composition.

The number of movements in the Op 8 trio sonatas ranges from as many as five (Sonatas VII and VIII) down to four (Sonata IX) and three (Sonata X). The first three sonatas have fugal movements, and though in his treatment of these textures Locatelli shows an evident desire to rid himself of strict compositional rules, in other respects the fugues remain faithful to earlier models (see, for example, the fermatas used to close off sections within the movements, a typically Corellian formula).

Innovation and conservatism alternate also in the part-writing: in some passages the first violin emerges strongly; in others the two violins stand out together against the bass; in yet others the three voices are interwoven in polyphonic textures. Compared with the Op 5 trio sonatas, these works make greater demands on the performer and reveal the composer’s desire to exploit more fully the instruments’ technical possibilities (we should remember, however, that the Op 5 set was written for two violins or two flutes, a condition that surely limits the possibilities of forging an idiomatic style based on the technical potential of a particular instrument). Sonata X merits a special mention. The exceptional choice of instrumentation – the cello is promoted to second voice – may perhaps be explained by the work’s destination: this was a piece written for a particular amateur or professional cellist. As it is, the cello engages in dialogue with the violin practically throughout and the part includes a number of passages that make strong demands on the performer’s skill.

In conclusion, though the Op 8 is in many respects a composite and inconsistent set, its very heterogeneity gives rise to much variety and vitality. Alongside one ‘Locatelli’, the heir to Corelli and the emulator of the imposing Corellian model, stands his counterpart: the virtuoso, the acute connoisseur of the violin’s rich technical potential, and the modern spokesman of a stylistic transition that, within a short space of time, was to mark the definite close of the Baroque era of music.