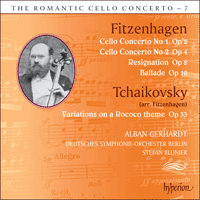 The music of Wilhelm Fitzenhagen bursts into the Hyperion catalogue with two triumphant cello concertos, a couple of other original works, and his (in)famous version of the Tchaikovsky Rococo Variations. Ace cellist Alban Gerhardt presides.

‘Enthusiastically recommended’ (Gramophone)
‘Everywhere here Gerhardt is at his most eloquent, technically exceptional and interpretatively satisfying. It would be hard to imagine finer support than that provided by the world class Deutsches Symphonie-Orchester Berlin under Stefan Blunier who holds everything together with adept assurance. The sound quality was wholly satisfying with an especially splendid balance between soloist and orchestra’ (MusicWeb International)» More
‘Excellently recorded and scrupulously played performances … 'The Romantic Cello Concerto’ series … is going from strength to strength’ (MusicWeb International)» More
‘Alban Gerhardt has been the soloist on five of the seven releases in this terrific series that never fails to delight and impress, and he is once again in his element with this music’ (The Whole Note, Canada)» More
«Après plusieurs disques admirables, Alban Gerhardt confirme une aisance de premier plan, une soyeuse sonorité et un ton raffiné à la fois plein de fougue et d'élégance» (Diapason, France)» More

Wilhelm Fitzenhagen was born in 1848 in Seesen, a small town situated between Göttingen and Braunschweig in Lower Saxony where, in 1836, Heinrich Steinweg (later Henry Steinway) had built his first piano. Fitzenhagen’s father worked as a court musician for the Duke of Braunschweig, and saw to it that his son received a serious musical training from an early age. By the time he was five years old, Fitzenhagen was receiving lessons on the piano, then the violin and cello, and apparently he was called on to play several different wind instruments in the Duke’s band when the need arose. In his early teens, Fitzenhagen chose the cello as his principal instrument. At the age of fourteen he started lessons with Theodor Müller (1803–1875, one of four brothers who formed a string quartet greatly admired by Berlioz), before the Duke of Braunschweig released him from military service and helped to support his studies in Dresden with Friedrich Grützmacher (1832–1903)—coincidentally another cellist whose father had been a member of a Ducal band. Grützmacher was a greatly respected virtuoso who achieved later notoriety for his assembly (from several works) of what became known as ‘Boccherini’s Cello Concerto’. Fitzenhagen was one of his most gifted pupils, but Grützmacher never abandoned his solo career (in 1898 he played the solo cello part in the first performance of Strauss’s Don Quixote). Fitzenhagen, still only twenty years old, joined the Dresden Hofkapelle (now Staatskapelle) and embarked on a solo career. He soon made a name for himself. In 1870 he was invited to play at the Beethoven Festival organized by Liszt in Weimar. Liszt tried to persuade Fitzenhagen to join the orchestra in Weimar, but he had already accepted a post as professor of cello at the Imperial Conservatoire in Moscow. At the same time, Fitzenhagen also embarked on a career as a composer, though he seems to have been largely self-taught. In 1870 the Leipzig publisher Kahnt issued a Romanze for cello and piano that Fitzenhagen designated his Op 1. In 1872–3 several cello pieces were published by Breitkopf & Härtel, including the Tarantelle, Op 5, Notturno, Op 6, as well as the original version of Resignation, Op 8.

But Fitzenhagen had grander composing ambitions. His two largest publications, announced in the Hofmeister Musikalisch-literarischer Monatsbericht in February and May 1873, were the first cello concerto in B minor, Op 2, and second concerto (‘Fantastique’) in A minor, Op 4. Breitkopf issued not only cello-and-piano reductions but also complete printed orchestral material. Fitzenhagen had composed both works a couple of years earlier: the B minor concerto in 1870, and the A minor in 1871.

The Cello Concerto No 1 in B minor, Op 2, is dedicated to ‘His Majesty Grand Duke Carl Alexander of Sachsen-Weimar-Eisenach, in deepest reverance’. Carl Alexander was an aristocrat known for his generous encouragement of musicians and writers, including Liszt, Wagner and Hans Christian Andersen. The concerto is in three movements, played without a break. The first opens with a dramatic and very short orchestral tutti before a less agitated melody is introduced by the soloist. The second main theme arrives once the music has modulated to D major. Marked tranquillo, this gentler melody is first heard on the cello, supported by strings. These are the two principal melodic components, though in the substantial cadenza it is the opening tutti that is recalled first. This cadenza requires some spectacular virtuosity from the soloist but it ends quietly, leading via two pizzicato chords to the central Andante in G major, a song-like movement dominated entirely by a lyrical melody on the cello. The finale begins with a lively rising motif in the orchestra, the rhythm of which generates the main theme introduced by the soloist. The same rhythmic idea infuses much of what follows, whether in the orchestral accompaniment or in the solo writing. A modulation to B major leads to some of the most pyrotechnic passages for the soloist and to a triumphant conclusion.

Though it has a subtitle, ‘Fantastique’, the Cello Concerto No 2 in A minor, Op 4, is not a programmatic work, but provides another example of Fitzenhagen’s fluent and melodic musical language. Arnold Schering wrote in his Geschichte des Instrumentalkonzerts (1905) that Fitzenhagen ‘seems to show the influence of Vieuxtemps, and in his Concerto fantastique, Op 4, what stands out is the use of poetical musical language and thematic concision, and ample use of a declamatory instrumental style’. It is intriguing that Schering compares Fitzenhagen with Vieuxtemps given that the Belgian’s own cello concertos were yet to be composed (the first was written in 1876), and his point about ‘poetic musical language’ is more apparent from the influence of another composer: Schumann. The Maestoso opening introduces an idea that begins with four notes (E–C–B–A) which not only generate the music of the solo recitative that follows, but also the principal theme of the movement, marked Allegro moderato and introduced by the soloist over gently pulsing chords in the strings and itself generating much of what follows. After a series of solo interjections and several changes of tempo, the central Andante arrives. It is in B flat major and based almost entirely on the arching theme introduced by the soloist at the start. In the finale, marked Allegro moderato, Fitzenhagen brings back the distinctive rhythm and melodic contours of the first movement’s main theme during an orchestral passage, and this idea returns again at the start of the solo cadenza. A recollection of the slow movement precedes the modulation into A major that heralds a triumphant finish.

Fitzenhagen’s Resignation, Op 8, subtitled ‘a sacred song without words’, was written shortly after his move to Russia (it is dedicated to ‘his friend Eduard Klein in Moscow’). It was originally published for cello with accompaniment by harmonium, organ or piano in November 1872, but in 1874 Breitkopf issued the score and parts of the version for cello and small orchestra included on this recording. The scoring is rather unusual: a single flute and oboe, two clarinets and bassoons, two horns, divided cellos and double basses. Marked Sehr langsam und feierlich (‘Very slow and solemn’), it is dominated by a fervent and appropriately hymn-like melody on the cello, supported by an orchestra characterized by woodwind and underpinned by lower strings, reflecting Fitzenhagen’s original accompaniment for harmonium or organ, and allowing the solo instrument to sing effortlessly.

The Ballade is subtitled ‘Concertstück’, and it was first published by the Kassel (later Berlin) firm of Luckhardt in 1875. A substantial work lasting well over quarter of an hour, it amounts to a one-movement concerto. The orchestral introduction, marked Adagio misterioso, presents an uncertain, weaving theme heard in imitation on muted strings, and punctuated by pizzicato interjections with a dotted rhythm that assumes greater importance as the work progresses. With the entry of the soloist, the music takes a more overtly lyrical turn (the cello delicately echoed by the clarinet), moving towards a climax underpinned by the rhythm first heard in the introduction. This piece is a kind of dramatic monologue, but in its first few minutes Fitzenhagen shows himself to a be a very capable orchestrator, with some particularly deft woodwind writing. After a series of short cadenzas, interrupted by orchestral chords, a martial idea emerges on the cello, before a return of more familiar material. A new theme is introduced by the soloist with a change in tempo (Moderato con espressione pathetico), and the predominantly serious mood is maintained. With inventiveness and polished craftsmanship, Fitzenhagen develops and presents these musical ideas afresh (often with colourful orchestral accompaniments) before bringing the work to an appropriately stern conclusion in the home key of F sharp minor.

Fitzenhagen established himself as one of the finest cellists in Russia after his arrival in Moscow, and he quickly came to know Tchaikovsky. In March 1871 he was the cellist in the first performance of Tchaikovsky’s first string quartet (the viola player on that occasion was the ballet composer Ludwig Minkus). Fitzenhagen subsequently played in the private performances (in Nikolai Rubinstein’s apartment) and public premieres of Tchaikovsky’s second and third quartets in 1874 and 1876. With Sergei Taneyev and the violinist Jan Hřímalý, Fitzenhagen played through Tchaikovsky’s piano trio in 1882 and, according to the composer’s note on the manuscript, all three players suggested ‘certain revisions which were all accepted by myself’.

But it is for a much more far-reaching revision that Fitzenhagen’s name is best remembered. Tchaikovsky dedicated the Variations on a Rococo theme, Op 33, to him, composing the cello-and-piano score in December 1876 and January 1877. Tchaikovsky sent this manuscript to Fitzenhagen for his comments, and the cellist inserted numerous changes, pasting the more drastic ones over the original manuscript. Fitzenhagen’s interventions in this work went far beyond suggestions about the cello writing. One of Tchaikovsky’s variations (the eighth and last) was cut completely and Fitzenhagen’s version comprised an introduction, theme and seven variations. Tchaikovsky’s third variation (the Andante in D minor) came sixth in Fitzenhagen’s version, and the cadenza which preceded it was moved accordingly. Tchaikovsky’s seventh variation (the Andante in C major) was moved to third place by Fitzenhagen, while the fourth variation (Allegro vivo) was used to end the work. Along with cuts, inserted passages and tempo changes, this was a drastic reworking.

Early in 1878, Tchaikovsky’s publisher Jurgenson wrote to the composer, unable to conceal his astonishment at Fitzenhagen’s high-handed behaviour: ‘Loathsome Fitzenhagen! He is most importunate in wishing to alter your cello piece, to make it more suitable for the instrument, and he says you have given him full authority to do this. Good heavens! Tchaikovsky revu et corrigé par Fitzenhagen!’ Anatoly Brandukov had studied composition with Tchaikovsky and the cello with Fitzenhagen, so knew both of them well. He reported a conversation with Tchaikovsky: ‘“Fitzenhagen’s been here. Look what he’s done with my composition—everything’s been changed!”. When I asked what action he was going to take concerning this composition, Pyotr Ilyich replied: “The Devil take it! Let it stand as it is!”’ And stand it did for more than half a century, until Tchaikovsky’s original version was published in 1956 in the collected edition of his works. Even so, Fitzenhagen’s version has continued to be performed and it remains his most enduring musical legacy.