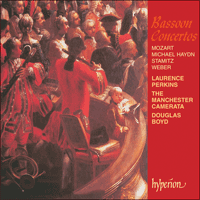 In 1932 Sacheverell Sitwell wrote 'No composer has ever understood the qualities of individual instruments as did Mozart ... with the bassoon, it is like a Sea-god speaking'. And yet Mozart was just eighteen years of age when he wrote this highly imaginative concerto, and it is the only one of three he composed for bassoon to survive. M. Haydn's Concertino further explores the instrument's lyrical qualities, and Stamitz displays a gift for melodic charm and inventiveness, of which his Concerto in F major is a good example, relying more on melody than virtuosic display. Weber's Op 35 began life as a viola solo with orchestra and is Hungarian in flavour, and his Concerto in F major is unerringly cheerful throughout.

This highly enjoyable disc ebbs and flows through a medley of melodies, interspersed with moments of calm tranquility and utmost beauty, giving Laurence Perkins the opportunity to prove he is master of the Sea-God of the instrument world.

‘A delightful and generous collection’ (Gramophone)
‘Dazzling. Hyperion's perceptive talent-spotting has produced a charming disc from performers virtually new to the catalogue – unreservedly recommended’ (BBC Music Magazine)
‘The performances are all sophisticated … a pleasure to listen to’ (American Record Guide)
‘A recording of airy clarity … a most recommendable disc, with much to enjoy’ (International Record Review)
‘Perkins brings out the fun in much of the inspiration as well as the lyrical beauty, warmly accompanied by the Camerata’ (The Guardian)
‘Dynamic and expressive contrasts are carefully and adroitly created and the orchestra meticulously managed. The result is a lovely and technically superior recording, not to mention another star in the crown of the folks at Hyperion’ (Fanfare, USA)
‘The playing of the Manchester Camerata (on modern instruments) is excellent throughout … They and their oboist conductor support their principal bassoonist with such care and attention that it is fair to call this a labour of love all round. Enjoy’ (MusicWeb International)
«La Manchester Camerata propose un excellent encadrement orchestral, spirituel, avec des tutti aux contours finement dessinés, une articulation franche et une pulsation énergique» (Répertoire, France)

No composer has ever understood the qualities of individual instruments as did Mozart … with the bassoon, it is like a Sea-god speaking, and the most beautiful and elaborate fancies of Debussy, in La Mer, are not more evocative of the spray, of Neptune with his flashing trident, and of the tritons sounding their conch-shells. (Mozart by Sacheverell Sitwell (1932)

Whatever you think of Sacheverell Sitwell’s colourful description of the sound of the solo bassoon, there is undoubtedly a versatility and expressive range in the bassoon’s voice which I hope is evident in the works featured in this recording, all of which date from a rich and prolific period in the instrument’s repertoire. Undoubtedly the best-known is the work to which Sitwell refers, the Mozart Concerto in B flat, K191, yet it is easy to forget that the composer was just eighteen years of age when he wrote this highly imaginative work in June 1774 whilst in Salzburg. There is evidence that he wrote another two concertos for the instrument but, sadly, there is no trace of them, the only other solo work to have survived being the Sonata K292 with cello accompaniment. Throughout the concerto there is a satisfying balance of humour without caricature, virtuosity without note-spinning, and a lyricism which establishes more than ever before the bassoon’s expressive qualities throughout the three-octave range available at the time. The slow movement in particular is a jewel of melodic writing, using a melody which Mozart wrote into a notebook at the age of eight, and later re-used in a modified form as ‘Porgi amor’ in Le Nozze di Figaro. The last movement is a minuet in rondo form, where the bassoon presents a playful set of variations on the main minuet theme, the latter appearing in the solo part only near the end of the movement. Throughout the concerto the orchestral writing is equally colourful, with delightful interactions between the strings and soloist, and a particularly beautiful muted accompaniment in the slow movement, all of which is further enhanced by some playful writing for the oboes and often spectacularly high B flat alto horn parts.

The Concertino by Michael Haydn is in fact a concertante movement from an orchestral serenade. Although he never achieved the lasting fame of his older brother Franz Joseph, he was a powerful influence in his time (his pupils included Weber) and a skilful and prolific composer, producing thirty symphonies, numerous concertos, operas and a great deal of church music. The history of this work is slightly confusing, as it was one of a number of movements that were recycled and re-grouped into different works at different times, but it appears to have been written during the early 1760s. In this concertante movement the bassoon takes a very prominent solo line (including the opportunity for a cadenza), exploring—as Mozart did just a few years later—the instrument’s lyrical qualities over a wide range of notes.

As a young violinist and composer, Karl Stamitz witnessed the development of the modern orchestra in his home town of Mannheim. This was the pioneering work of his father Johann Wenzel Stamitz, who in 1745 was appointed by Emperor Karl VII as lead violinist and conductor of the Mannheim Orchestra. His development of the orchestra and establishment of classical sonata form paved the way for Haydn and Mozart, and established the route for his son Karl (who was a second violinist in the orchestra) as one of the early classical composers. Karl travelled extensively, working in London, Paris and St Petersburg as well as on home territory in Germany. His compositions, which include seventy symphonies and numerous concertos as well as operas and chamber music, display a gift for melodic charm and inventiveness, of which this concerto is a good example as it relies more on this than on virtuoso display. In the first movement, after an impressive and substantial opening tutti, the soloist enters with a forthright but still essentially lyrical melody in the tenor range, which even on modern instruments is still the bassoon’s strongest melodic register. Expressive contrasts are effectively and skilfully created, such as the brief minor section towards the end of the first movement where the soloist is accompanied by the darker sounds of the lower strings. Along with the Mozart concerto, the slow movement is very cantabile, but in the last movement Stamitz opts for a fast and delightfully playful character.

The two compositions for bassoon and orchestra by Carl Maria von Weber stand out in a century when very little bassoon solo repertoire emerged, unlike the eighteenth or twentieth centuries. The Andante e Rondo Ungarese, Op 35 was written in response to the success of his Bassoon Concerto Op 75, and was requested by the bassoonist in the Munich Orchestra, Georg Friedrich Brandt. It is in fact a reworking of an earlier composition—it began life as a viola solo with orchestra, written for the composer’s brother. Weber’s modifications for the bassoon version are mainly in the solo part, but the character of the work remains essentially the same. The Andante is a rather plaintive theme in C minor, followed by three variations. In the first, the bassoon provides an accompaniment to a two-part version of the theme on violins alone. The second variation moves into the relative major key of E flat, and in the final variation the bassoon assumes a virtuoso obbligato role with strings and woodwind providing a richly orchestrated version of the melody. A dramatic link leads us directly into the Rondo Ungarese, which is Hungarian in flavour only, largely through the rhythms in the solo line and accompaniment. As always, lyricism is never far away, but virtuosity wins the day and the work concludes with a spectacular final flourish for the soloist.

Weber’s Opp 35 and 75 were originally published as orchestral parts only (no score) in the early nineteenth century by the composer’s own publisher in Berlin, Schlesinger. They were full of inconsistencies and inaccuracies, a few of which originate from the autograph manuscripts which have survived for both works. In the case of Op 35, the eminent bassoonist and musicologist William Waterhouse has produced an excellent published edition which was used for this recording, but at the time of planning the recording sessions for this CD there was no accurate published edition of the orchestral parts for the concerto. Thanks to the invaluable assistance of William Waterhouse, I was able to prepare a new performing edition from the 1822 autograph manuscript, here receiving its first recording. A few editorial decisions were necessary to cover Weber’s own occasional inconsistencies—such decisions were based as far as possible on Weber’s own indications, and it was a great joy to me to hear the work spring to life with a range of textures and dynamics previously compromised by the inconsistencies in earlier editions. The concerto’s origin as the product of a great operatic composer is that much clearer, revealing the drama and contrasts more than ever before, and (I feel) re-establishing the work as one of the great solo bassoon masterpieces of all time.

Weber wrote his Concerto in F major, Op 75 in November 1811 for Georg Friedrich Brandt. It followed the immediate success of his Clarinet Concertino (written for Heinrich Bärmann), and was first performed by Brandt in the Munich Hoftheater on 28 December 1811. Brandt gave at least three further performances of the concerto before Weber returned to the work in 1822, making several revisions and thus creating the version recorded here. An impressive opening tutti builds dramatically, then stops suddenly, leaving just a pianissimo solo timpani to announce the entrance of the soloist. The second subject is pure opera—a wonderful aria-like melody first on the bassoon, then on flute and oboe alongside a lyrical obbligato by the soloist. Virtuoso passages are of course numerous, but the development section takes an unexpected turn, creating a somewhat muted drama in a triplet passage marked con fuoco, then resolves lyrically before moving subtly into the recapitu­lation. In the slow movement, Weber explores dramatic expressive contrast to the fullest extent, despite his economical scoring of just two horns and strings. A powerful four-bar introduction leads into a beautiful soaring melody on the bassoon with a gentle legato accompani­ment in the strings, ending with an even stronger modified version of the introduction (this time marked fortissimo) which leads directly into a brief, moody second subject in C minor. The middle section, scored for just two horns and bassoon, has a gentle pastoral quality not dissimilar to the slow movement of Weber’s first clarinet concerto (written in the same year) and preempting passages in Der Freischütz nine years later. In the last movement, the solo part skilfully combines playful lyricism with energetic virtuosity alongside an accompaniment which is mostly very lightly scored, offering the soloist scope for dynamic contrast and characterisation. Unerringly cheerful throughout, the work ends—as one would expect—with an impressive display of soloistic virtuosity.