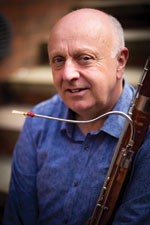 Laurence Perkins has become one of Britain’s best-known solo bassoonists through his concert performances and numerous solo and orchestral recordings. His recitals in the UK have included the Wigmore Hall and Purcell Room in London, Dartington International Summer School, and live broadcasts for BBC Radio 3 and Classic FM, and he has given recitals and concertos in several European countries.

He was Principal Bassoonist with Manchester Camerata from 1974 to 2017, with whom he recorded concertos by Mozart and Weber for Hyperion, which received a five-star rating in the BBC Music Magazine, with the Mozart Concerto being a top recommendation on BBC Radio 3’s Record Review programme.

Laurence is a bassoon tutor at the Royal Northern College of Music in Manchester, and his educational work has included national and international projects promoting the bassoon to young musicians. He is also heavily involved in working with amateur musicians, tutoring bassoon and chamber music at many summer schools and courses in the UK and overseas, including a series of courses at Higham Hall in the English Lake District and at Cubertou in the south of France. He has also tutored at courses in Malvern, Aberystwyth, Sherborne, Dartington, Alston Hall in Lancashire, and Oxford.

His other activities include musical relaxation sessions with cancer patients and landscape photography.