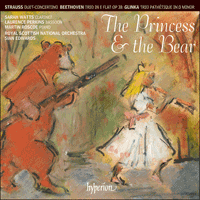 The Princess & the Bear

The Duet-Concertino is one of those lyrical, bittersweet scores from Strauss’s Indian summer. Laurence Perkins argues that behind the notes lies a hitherto little-known programme—whence the album’s title—and that this misunderstood work has good claims to be regarded as Strauss’s final tone poem.

‘Watts does ravishing things with the great clarinet melody with which the work opens, to which Perkins responds with a gruffness that gradually broadens into deeply felt lyricism. There’s plenty of wit and bravura from them both in the finale, where Edwards’s refusal to rush also allows us to appreciate the complexity of Strauss’s musical argument … it’s an engaging disc, and very enjoyable’ (Gramophone)
‘Don’t overlook this gem of a recording … the Strauss Duet-Concertino, a seldom-recorded and hitherto misunderstood work, is worth the cover price alone … the solo performances are first-rate and the strings and harp of the SNO under Sian Edwards’ direction offer an excellent accompaniment, never forcing the pace’ (MusicWeb International)
‘With attractive playing from all concerned and an unusual and appealing programme this Hyperion release is easy to recommend’ (MusicWeb International)

Richard Strauss’s Duet-Concertino is a substantial composition from the final period of his life, worthy of special attention because it is a work that has been seriously misunderstood and neglected over the years. Strauss rather unhelpfully gave the work a somewhat bland title, but it is not really comparable with (for instance) the oboe concerto from two years earlier which is not in any way programmatic and very much follows the classical form. The Duet-Concertino is significantly different, and without the background and understanding of what it is about or how it is structured, the work sounds confusingly quirky with some rather odd sections. It is rather like trying to make sense of the sheep or windmills in Don Quixote, or the acerbic critics or battle scene in Ein Heldenleben, without knowing the story. Once you do know what is happening, these pieces makes total sense—and so it is with the Duet-Concertino.

The story, as Strauss told Hugo Burghauser, the principal bassoonist of the Vienna Philharmonic and dedicatee of the piece, is loosely based on the classic fairy tale Beauty and the Beast. Strauss left no specific synopsis for the Duet-Concertino, but the storyline is very clear throughout the work, so in a sense one can regard this piece as Richard Strauss’s final tone-poem. Written for two soloists—clarinet and bassoon—with string orchestra and harp, his choice of much smaller forces than he had previously used for tone-poems in some ways amplifies the expressive content of this music.

The opening section, marked allegro moderato, features a long and very beautiful clarinet solo representing a glamourous princess dancing in a forest glade. This phrase establishes a leitmotif for the princess. Then, without any warning, a bear appears (the first bassoon entry) and startles the princess. It quickly becomes clear that the bear means no harm and—in his efforts to make friends with the princess—he attempts to dance alongside her. The bassoon’s somewhat angular phrase with a rising major 7th interval is the ‘bear’ leitmotif. Sadly, the bear’s dance is very clumsy—Strauss creates this magnificently by writing the two solo parts in different time signatures, resulting in incompatible rhythms as the bear attempts and fails to match the princess’s elegant movements. This ends abruptly, and after a fanfare-like sequence of string chords, a more empathic dialogue emerges, leading into the slow movement, andante, which begins with a very beautiful and expressive bassoon solo. This can be interpreted as the bear’s heartfelt gesture of friendship, which is warmly welcomed by the princess, and for the first time in this piece the two solo parts unite, symbolizing the affirmation of their new-found friendship. This is made all the more significant at the end of the movement when, in a hushed unaccompanied moment, the two characters swap leitmotifs. This leads into the last movement, beginning ‘un poco esitando’ but quickly emerging as a joyous dance, marked allegro ma non troppo. This is the longest of the three movements, a rondo which takes the leitmotifs and other material from earlier in the work and brings them together into a wonderful musical celebration.

There is also another level to this piece which further explains the work being misunderstood. It was completed in 1947, two years after the end of the Second World War. Strauss professed to have very little interest in the war, but he was devastated by the level of destruction inflicted on Dresden by the British and US bombardment in February 1945. Because his daughter-in-law was Jewish, he had to tread very carefully during the war years, and after the war he was brought before a de-Nazification tribunal because of his brief involvement with the Reichsmusikkammer in 1933-35 (after which he ad nothing more to do with the Nazis). He was cleared, but during that period he suffered considerable financial hardship because all his assets (around $400,000) were frozen. He even had to ask to be given manuscript paper so that he could continue composing.

In the light of all this, it is no surprise that Strauss should turn his attention to a story which is about two totally different and seemingly incompatible characters—how they encounter each other and how they respond. In this instance, the response is one of empathy, learning to understand and accept differences, and ultimately celebrating those differences in a happy and peaceful co-existence. When you consider the stark contrast between this and the racist hatred and aggression that led to the horrors of the Second World War, you can see how this could well have resonated very powerfully with Strauss at that time. This is admittedly somewhat theoretical, but the late Michael Kennedy felt that this is very likely to be a valid theory and could well have provided some of the inspiration for the Duet-Concertino. So, at one level, this work can be seen as Strauss’s musical allegory to society—a powerful musical message for unity and mutual understanding between all societies and cultures instead of conflict and aggression. It is a message which is every bit as valid and relevant now as it was in 1947.

It was in Beethoven’s music that the clarinet and bassoon became such close musical partners, both in his orchestral works and in his chamber music, notably the septet, Op 20, and a set of three duos for clarinet and bassoon, WoO27. The septet, written in 1799 and 1800, did much to launch Beethoven’s career, and its popularity led publishers to release numerous arrangements for various ensembles. In 1803, Beethoven decided to create his own arrangement of the work for smaller forces, and the trio version was published as Op 38 in 1805. Following the instrumental line-up that he had used for the Op 11 trio in 1797, the combination of clarinet, cello and piano was an obvious choice for this new version. The re-voicing gives (for the most part) the septet’s string parts to the piano, while much of the original clarinet part is preserved in the upper line of Op 38, and much of the trio’s cello part is derived from the bassoon part of the septet, with the addition of occasional passages from the cello and horn parts. Given that making some extra money was very probably a significant incentive in creating this arrangement, Beethoven clearly felt that this was the combination (published with two versions of the upper part, for either clarinet or violin) that was going to sell the most copies. Then, as now, there were far fewer bassoonists around than cellists, and in offering the choice between clarinet and violin in this trio version, Beethoven was clearly not being too fussy about precise instrumentation! However, there is a strong case for performing this version with bassoon rather than cello, as it restores that very special link between the clarinet and bassoon which is such a special feature of the original septet. The original Op 20 bassoon passages sound very much ‘at home’ on the instrument for which they were written, and the horn solos from the septet are also highly effective on the bassoon in Beethoven’s trio arrangement.

This version of the work maintains the fresh, innovative character of the original septet. By transcribing the string parts with Beethoven’s characteristic pianistic style, it sounds totally convincing, as if it had been originally conceived in this form. From the spacious elegance of the adagio introduction to the first movement, leading into the energy, expression and momentum of the allegro con brio, we are on a very similar musical journey to the septet itself. The slow movement, adagio cantabile, remains as a wonderfully melodic vehicle for the clarinet’s lyrical qualities, while the minuet and trio is every bit as characterful, the bassoon adding its own brand of wit in the cheeky horn passages of the trio section. The theme and variations is particularly effective with lots of imaginative interplay between the three instruments, and the scherzo retains all the energy and excitement of the original version. The dark introduction to the final movement leads into the vibrant, energetic presto with the famous violin cadenza faithfully reproduced on the piano.

Mikhail Glinka was born in 1804, and was arguably the main figure in the establishment of musical nationalism in nineteenth-century Russia. This was despite his short life (he died in 1857) and a rather patchy musical education in his early years—he was in his mid-twenties when he started in-depth musical studies. He eventually became a major influence in the work and music of The Five—Borodin, Musorgsky, Cui, Balakirev, and Rimsky-Korsakov—and his work was also one of the inspirations in the music of Tchaikovsky. However, the Trio pathétique, written when Glinka was twenty-eight, was heavily influenced by his studies at the Milan Conservatory at that time, with strong echoes of the music of Bellini and Donizetti. Its composition also coincided with the unpleasant break-up of a love affair—he wrote on the manuscript: ‘I only know about love from the pain that it causes.’ Glinka had been aware of the clarinet and its musical qualities since his childhood years, but it is likely that his innovative use of the bassoon (rather than the cello) may well have been the result of a search for a darker, more brooding sound reflecting the mood of the piece. The young Richard Strauss was aware of this trio, and Glinka’s use of clarinet and bassoon could well have been the inspiration for his choice of solo instruments in the Duet-Concertino many years later.

The Trio pathétique is more or less continuous—the sections are clearly defined, but each movement runs attacca into the next. The restless first movement, with its bold opening statement on all three instruments, flows almost seamlessly into the mercurial scherzo, an ABA form with virtuoso piano passages in the outer sections and an altogether more relaxed middle section with an amiable melody shared between bassoon and clarinet. Towards the end of the scherzo, a drama begins to build and the music stops very suddenly, as a dark, brooding link passage emerges—all very operatic! This sets the scene for the slow movement, which is unmistakably influenced by Italian opera of the time—an expressive aria is heard firstly on clarinet, then on bassoon, and finally on piano with emotional interjections from both wind instruments. A gentle ending to this section is instantly shattered by bold, dramatic chords on the piano (echoing the first movement) which set the mood of the relatively short finale with a gradually increasing urgency leading to an exciting, if somewhat dark, ending.