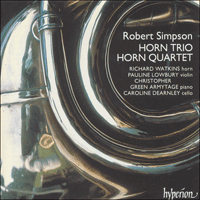 ‘The performances are exceptionally fine. Top flight recordings too … I shouldn't like to put [Hyperion's] Simpson CDs into a strict order of recommendation but, if pushed, I would have to place this one near the top’ (Gramophone)
‘These are most impressive pieces, and the performances are completely dedicated and highly imaginative. Excellent recording too’ (The Penguin Guide to Compact Discs)
‘Another mandatory instalment in Hyperion's magnificent series of Simpson recordings’ (CDReview)
«Une interprétation délicate, sensible et chaleureuse» (Répertoire, France)

(Trio for horn, violin and piano)
Robert Simpson's Horn Trio was commissioned by the Festival Trio of London (Frank Lloyd, Carol Slater and Anthony Halstead) with funds provided by The Arts Council of Great Britain. It was completed in September 1984, shortly before Simpson began work on his Ninth Symphony.

The composer stresses that this work is conceived very much as a 'genuine trio', despite the fact that the characteristic qualities of all three instruments are always respected. None dominates. Hence textural clarity predominates, consisting sometimes of just three or four contrapuntal voices. As is typical of Simpson's later music, the substance of the Trio evolves naturally from the power inherent in the basic intervals. Here minor thirds are significant, as well as semitonal clashes, usually created by contrapuntal lines crossing each other. Like the Sonata for Two Pianos (1980), the Horn Trio plays without a break but adopts a three-movement pattern — fast-slow-fast.

The opening movement (Allegro con brio) drives forward with great momentum, whilst allowing some space for some mysterious elements to pervade the music. There is, however, a more relaxed theme, a duet between horn and violin, that appears at the corresponding place where a second subject might be expected, though this Allegro does not adhere to sonata form. This more lyrical idea prevails in the closing stages of the Allegro and acts as a tragical transition into the central slow movement, Tranquillo. Simpson's contrapuntal mastery is strongly evident here; the music is peacefully flowing and contemplative, with only one brief episode of tension in the middle.

Polyphony also dominates the final Allegro which is heralded by some pattering semiquaver figurations on the piano. The composer once described this movement as having 'something of the character of a blunt Scherzo.' As with the finale of the Brahms Horn Trio, immense stamina is required from all players, particularly in the final stages where the music advances with trenchant energy towards a bold, decisive triadic conclusion.

(Quartet for horn, violin, cello and piano)
This Quartet, written in 1976 for the highly unusual (perhaps unique) combination of horn and piano trio, was originally conceived as a single-movement work titled 'Moto Crescente'. Shortly after the first performance, the composer extended it by adding a large Theme and Variations to balance the existing movement. Though much of the writing is as transparent as in the Trio, the Quartet is of a more sunny, amiable temperament.

The first movement, centred in D, adopts one of Robert Simpson's most characteristic devices, originally heard in the Third Symphony — a gradual increase in activity, transforming a slow opening to a lively Allegro whilst the basic pulse remains unchanged. The opening sound is rich in harmonies and unparalleled in chamber music: a low piano D and concert A on the horn.

This acts as a background for the first section, an intense, deliberate fugue begun in the higher register of the cello, The following sections are clearly determined by an increase in animation as the bars are compressed from 3/4 to 2/4 to 3/8, eventually arriving at a striding one-in-a-bar Scherzo, introduced again by low piano and horn. The coda reverts to the initial tempo as horn, violin and cello weave serene, elegant melodic lines, steering the music softly back into D.

Variation 1, also in D, maintains the gentle character of the the theme and introduces floating triplet patterns on piano and violin against broader lines on cello and horn. The texture is more fragmented in the next variation as faster triplet figurations skate through the music. A crescendo leads to variation 3, undoubtedly one of the most explosive and exhilarating in all Simpson: tierce, ascending arpeggios in the strings collide with repeated-note figures in the piano, sometimes involving thick triads. Above this, the horn sings a broad melody. The only possible precedent for such remarkable music might be the third variation from the Arietta of Beethoven's Opus IlI Piano Sonata. The tension eases in the fourth variation, though the former energy is felt to be still latent, particularly in the insistent violin notes and the mysteriously alternating pizzicati. D major is regained once more in the coda which despite rippling activity and a central crescendo contains some of the calmest and most evocative music in the entire Quartet.