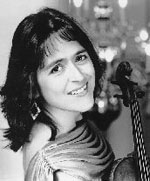 Pauline Lowbury has established a fine reputation as a soloist, chamber musician and orchestral leader, appearing at major venues throughout Europe. She studied at the Royal College of Music in London, subsequently winning a scholarship to the Juilliard School, New York, where she studied with Avan Galamian. As a concerto soloist she has appeared with the English Chamber Orchestra, the City of Birmingham Symphony and Ulster Orchestras, and the Academy of London. She is also a frequent soloist with The Britten Sinfonia which she leads.

Pauline has given highly acclaimed London recitals and has broadcast on television and radio. In 1986 she gave the first performance of Robert Simpson's Violin Sonata (now recorded by her) and more recently premiered a Sonata specially written for her by Matthew Taylor.

She is a founder member of The Lowbury Piano Trio, finalists in the 1993 Osaka International Chamber Music Competition.