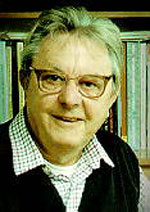 born: 2 March 1921
died: 21 November 1997
country: United Kingdom
Robert Simpson was born in Leamington, England, in 1921. From 1942 to 1946 he studied with Herbert Howells and in 1951 joined the BBC. In the same year he was awarded a DMus from Durham University for his First Symphony. He remained with the BBC until his resignation in 1980 over the Corporation's cultural policy. During his years with the BBC he championed the music of many composers, but in particular he was a strong advocate of Bruckner and Nielsen, both of whom have had an important influence on Simpson's own work. He has also written major studies about them: 'The Essence of Bruckner' (1966), and 'Carl Nielsen, Symphonist' (1979). His other writings include the BBC Music Guide 'Beethoven Symphonies' (1970). In 1986 he moved to Ireland and continued to compose, even after a serious stroke in 1992. He died on November 21 1997, at the age of 76.

Hyperion has recorded the first ten of Simpson's symphonies and, under the auspices of The Robert Simpson Society, all of the string quartets, both string quintets, the complete piano music and numerous other chamber works.