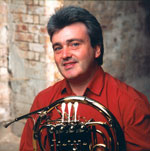 Richard Watkins is one of the most sought-after horn players of his generation. He was Principal Horn of the Philharmonia Orchestra for twelve years, and is currently a member of The Nash Ensemble and is a founding member of London Winds.

Watkins has appeared at many of the world’s most prestigious venues and has worked with conductors such as Carlo Maria Giulini, Wolfgang Sawallisch, Esa-Pekka Salonen, Leonard Slatkin, Giuseppe Sinopoli, Gennady Rozhdestvensky, Vasily Petrenko, Andrew Davis and Mark Elder.

Closely associated with promoting contemporary music for the horn, Watkins has given premieres of concertos by Maxwell Davies, Osborne, Magnus Lindberg, Dominic Muldowney, Nicola Lefanu, and Colin and David Matthews. Watkins holds the Dennis Brain Chair of Horn Playing at the Royal Academy of Music where he is also a Fellow.

Watkins has a long association with Aldeburgh Music, first performing Britten’s Serenade with Sir Peter Pears in 1983. Since then he has appeared regularly as soloist and recitalist, performing concertos by Colin Matthews and Oliver Knussen as well as performances of Britten’s works for solo horn, the Serenade and Canticles.