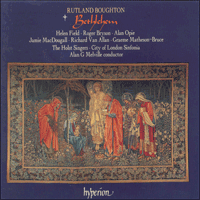 Bethlehem, the third of Rutland Boughton's ten music dramas, was the first to be written with specific reference to the conditions that prevailed at the Glastonbury Festivals which he founded in 1914. Ironically it was also the work which, in a provocative modern-dress production, precipitated the collapse the festivals at the end of 1926. It was composed in 1915 and first performed on 28 December, not in Glastonbury itself but at the Crispin Hall in the neighbouring village of Street where his staunchest supporters, Roger, Sarah, and John Bright Clark, had established their famous shoe factory. The work was an immediate success and became the mainstay of each successive Christmas Festival and its associated tour of the West Country. After publication in 1920 it was also widely taken up by amateur societies and was soon to be heard in every part of the English-speaking world. Despite the record-breaking London runs of The Immortal Hour in 1922/23, Bethlehem has probably, over the years, achieved the greater number of individual performances and productions — its simplicity and sincerity going straight to the heart and transcending both time and fashion in a manner that is summed up by the dedication Boughton placed at the head of the score: 'To my children, and all children.'

Rutland Boughton was born in Aylesbury on 23 January 1878. Though there was little music in his immediate family, his own interest developed rapidly and he was already an ambitious and prolific composer by the time he left school (1892) and found employment with a London concert agency. His compositions began to find publishers and soon attracted such attention that a fund was raised sufficient for a short period of study under Sir Charles Stanford at the Royal College of Music. When, after five terms, the fund ran dry Boughton had to endure several years of poverty and musical hack-work until, in 1905, he was rescued by Granville Bantock with the offer of a post on the staff of Birmingham's Midland Institute of Music. His career now took a more definite turn and he began to blossom not only as a composer, conductor, and singing teacher, but also as a thinker and polemicist. Socialism, of the William Morris variety, and the principles of Wagnerian music drama combined to play an important part in his development and, together with the poet Reginald Buckley and the artist Christina Walshe, he began to lay plans for a specifically English type of opera (the 'choral drama') which might be performed by a commune of like-minded singers and musicians living and working together in some place sympathetic to their dreams. At first Letchworth Garden City was the favoured spot, but second thoughts led the collaborators to Glastonbury where, on 5 August 1914, the first of the Festivals finally took place.

Conditions in Glastonbury were far from ideal, but Boughton's burning enthusiasm attracted the support of local amateurs who, together with the help of young professional singers grateful to find a practical outlet for their operatic ambitions, banded together and enabled him to present not only his own operas, but also those of such composers as Gluck, Purcell, John Blow, Edgar Bainton, and Clarence Raybould. The Glastonbury Assembly Rooms became Boughton's theatre, and a grand piano his orchestra. Productions began simply enough, but through imaginative experiment soon developed a style of their own and a considerable degree of sophistication. Festivals were held at regular intervals: Christmas, Easter and Whitsun, culminating in a month-long Summer School and Festival each August.

In the years immediately after the Great War Boughton's activities came to be recognized as a valued focal point for British opera, and when, in October 1922, Sir Barry Jackson arranged for The Immortal Hour to be transferred from a successful Birmingham run to the Regent Theatre, King's Cross, and that opera proceeded to conquer London with a record-breaking run of 216 consecutive performances (followed by a series of major revivals), Rutland Boughton was hailed as the most important British operatic composer of his generation.

The rising tide of his career came to a sudden halt, however, in December 1926 when, horrified by the injustices of the miners' lock-out and subsequent General Strike, he decided to change the nature of a production of Bethlehem that had been scheduled for Church House, Westminster, and present instead a blunt declaration of political faith. Abandoning the customary medieval setting, he showed a Christ born in a miner's cottage, and a Herod that was the very embodiment of top-hatted capitalism. The scandal was immense and the production lost money. Unfortunately he had not consulted his fellow directors: recriminations followed and it was decided to wind up the activities of the Glastonbury Festival Players.

Towards the end of 1927 Boughton went to live on a smallholding in Gloucestershire, there to pursue his theory that the creative artist is all the better for getting his hands dirty from time to time. Summer festivals at Stroud (1934) and Bath (1935) were artistically successful but failed to take permanent root. He lived on, in tranquillity, completing in 1945 the cycle of five Arthurian music dramas he had begun in 1908 and which had been the real inspiration behind the Glastonbury Festivals. He also wrote copiously in many other forms, including two String Quartets, five Concertos, and three impressive Symphonies, as well as several provocative books and a vibrant stream of articles for such magazines as The Sackbut. He died in London on 25 January 1960, all but forgotten but nevertheless a fulfilled and contented man.

Rutland Boughton adapted his libretto from the fourteenth-century Coventry Nativity Play, as performed by the Shearman Taylors' Company, using Thomas Sharp's 1825 transcription of the surviving fifteenth- and sixteenth-century manuscripts. He made several cuts to sharpen up the action, and added certain well-known fifteenth-century carols for Mary and the Angels to sing. He also marked off each stage of the drama by a well-known Christmas carol. Deployed in much the same way as Bach used the chorale in his Passions, Tippett the spiritual in A Child of Our Time, and Britten popular hymns in Noye's Fludde, the carols form a powerful commentary on the action and relate it in a very personal way to the everyday experience of the listener. Each carol was originally intended to be sung by the audience in unison (as was done in 1915), but Boughton later elaborated them in the manner of the choral variations on British folksongs that had helped to make his name at the beginning of the century. The result is some of the most powerful and orginal carol arrangements that have ever been made.

Perhaps the most striking thing about the music of Bethlehem is its utter simplicity. Gone are all the Wagnerian trappings to be found in Boughton's earlier compositions. Everything is stripped to essentials — the cleansing influence being that of folksong, although, apart from the carols, only one actual example is used (to characterize Zarathustra at the beginning of Act Two). The rest is Boughton responding with artless sympathy and writing 'folksong' of his own to such purpose that Vaughan Williams found it hard to believe he had not indulged in a 'collecting' spree among the good folk of Glastonbury. For Herod, on the other hand, Boughton adopted a deliberately showy, vulgarly flamboyant style the better to suggest the empty pomposities of royalty. An extended ballet sequence (omitted in this recording) carried musical mockery perhaps a shade too far in an orgy of Brummagem orientalism more reminiscent of Ketelby's art than his own. The three Shepherds are delightfully characterized by Boughton's simulated folksong, while the Wise Men add touches of ragtime (for Nubar) and, for Merlin, a theme that he had already used to good effect in the first of his Arthurian dramas, The Birth of Arthur. His skill in combining the three Wise Men's themes, and, in the Herod scene, unexpectedly linking two very different carols, adds greatly to the excitement and dramatic impact of the score. Indeed, Bethlehem is the only one of Boughton's music dramas to make use of the ensemble. Nor is it without orchestral felicities. Scored only for a small orchestra, it is a model of subtle resource, limpid in its colouring and perfectly in keeping with the innocent story it is required to illustrate.

Synopsis
Act one
Choral Prelude: 'Earth today rejoices':
Scene 1: The home of Mary and Joseph. The Angel Gabriel tells Mary that she has been chosen above all women to conceive and bear God's only son. Though frightened at first, Mary submits to the Lord's will. When, however, she tells Joseph what has happened he chides her for deceiving him and prepares to leave, but the Angel Gabriel reassures him of her innocence. Together they set out for Bethlehem.

Choral Interlude: 'In the ending of the year'
Scene 2: A Moor at Night. The Shepherds Jem, Dave, and Sym see a great star and hear angel voices telling of the birth of a Saviour. Joyfully they set out to find the Holy child.

Choral Interlude: 'O come, all ye faithful'
Scene 3: The Stable at Bethlehem. Mary sings a lullaby to the new-born child. The Shepherds present their simple gifts — a penny whistle, a hat, a pair of warm mittens — and go on their way rejoicing.

Choral Interlude: 'The Holly and the Ivy'

Act two
Scene 1: Before the door of King Herod's palace in Jerusalem. Three Wise Men, Zarathustra, Nubar, and Merlin, meet. Each has followed the star and will now journey together to Bethlehem. A woman spreads the news of the birth of a Saviour and there is great rejoicing among the crowd. This is interrupted by the sudden and terrifying appearance of Herod who demands that the Wise Men be made to explain their mission. Calchas the Herald brings them before him and he learns that a Child has been born who will be King over all the World. Herod pretends to be sympathetic, but when they have gone he rages against the Child and vows to kill Him.

Choral Interlude: 'The Seven Joys of Mary'
Scene 2: The Stable at Bethlehem. The Wise Men present their gifts of gold, frankincense, and myrrh. The Angel Gabriel warns of Herod's evil intentions and the Wise Men take heed. As the angels sing their paean of praise Mary and Joseph set out for the safety of Egypt.

At approximately 95 minutes (the vocal score's suggested running time of 120 minutes is hopelessly adrift), a complete performance of Bethlehem is too long for one CD and far too short for two. Various cuts were sanctioned by Boughton when concert versions were performed. These have provided the basis for the present recording. The major excision is the oriental ballet (including a mimed sequence illustrating Herod's wrath) which occupies a good ten minutes of the second act. Boughton rightly believed that this only made sense when allied to a visually exciting stage scene, and that the deliberate vulgarity of the music made it unsuitable for concert performances. Elsewhere a number of brief cuts have been made, often a matter of a few bars. As these are invariably associated with the need to accommodate stage movements their omission does not prejudice the logical flow of the music itself. Most reluctantly it has also been decided to omit certain verse repetitions, though always with regard to the effect their absence has on the musical structure.