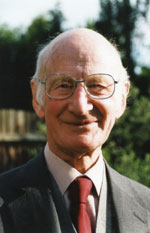 Alan G Melville's career as a conductor and chorus master stretched for over 60 years. His was the job, as chorus master, of convincing a sometimes moodily reluctant Sadler's Wells chorus that Peter Grimes was not only singable, but an important new departure in English opera. Melville's career at the BBC lasted from 1950 until his retirement in 1971, during which time his middle initial was required to distinguish him from the writer Alan Melville. Born at Leatherhead in Surrey in 1911, Melville was found to possess perfect pitch while still in short trousers, and duly became a chorister at Magdalen College, Oxford, where he remained to finish schooling after his voice broke. In the late 1920s, he went up to the Royal College of Music to study conducting and piano. Here he came into contact with the precocious young Britten, and also met his future first wife. At the end of the war, Melville took up the post of chorus master at Sadler's Wells Opera. In 1950, Melville joined the BBC as one of three assistant opera chorus masters. He remained an unsung hero, although in the 1960s there were more opportunities to conduct works in concert for the BBC—for example, the first broadcast of William Walton's Missa Brevis, the premiere of Humphrey Searle's Song of the Sun at the Cheltenham Festival, and a programme of Tippett choral music for the composer's 60th birthday. Away from the BBC Melville conducted amateur choruses (among them the Board of Trade Choir), occasionally in collaboration with the Rosebery Orchestra, which was founded by his daughter, Clarissa. In retirement he set up the Rosebery Opera Workshop to give assistance to young singers, although the highlight of his later years brought him full circle to the work that first fired his imagination. In 1983 he conducted the first complete recording of The Immortal Hour, following it ten years later with Boughton's choral drama Bethlehem. Alan G Melville died on 1 March 1998.