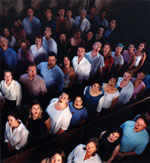 The Holst Singers is one of Britain’s foremost choirs, described by the BBC as ‘a leading chorus on the international stage’. In addition to a busy concert diary the choir frequently broadcasts on Classic FM and BBC Radio 3, and has made many acclaimed recordings for Hyperion.

With the support of its President, James Bowman, and Musical Director, Stephen Layton, the choir has developed an interest in exploring new and neglected works as well as core choral repertoire. In concert the choir is renowned for dramatic and engaging performances, described by The Times as ‘interactive concert-going at its most revelatory’. They have become renowned for their exploration of, Russian and Baltic music, exemplified in two albums, Ikon and Ikon II. They also premiered and recorded Sir John Tavener’s The Veil of the Temple, and have recorded music by Schnittke, Grechaninov, Vaughan Williams and Veljo Tormis.