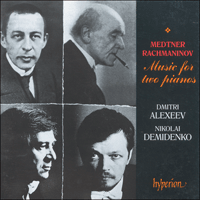 I love him very much, I respect him very much, and … I consider him the most talented of all the modern composers. He is—as musician and as man—one of those rare beings who gain in stature the more closely you approach them. That is the fate of the very few! and may this bring him much good. But that is Medtner: young, healthy, bold, strong, armed—a lyre in his hands. (Rachmaninov to Marietta Shaginian, Ivanovka, 8 May 1912)

A Russian of distant German descent, Medtner studied at the Moscow Conservatoire, graduating in 1900 with the coveted Anton Rubinstein Prize. Admired as a pianist of formidable attainment and inventive imagination, he came to England in the late 1930s, settling in London. That his music (including three piano concertos, a piano quintet and over a dozen sonatas) remains largely unknown cannot be justified. An alloy of the intensest of emotions and sounds, of the most subtly variegated rhythmic life, it can, it’s true, often overcome one’s ability to perceive at first hearing; it can ‘overload the circuitry of our mind’. Medtner’s most complex work does not clarify easily. But this should not deter us. Creatively the equal of Rachmaninov and Stravinsky, his two most famous émigré compatriots, metaphorically like an Arthurian knight of old impassioned by his lady, he was an artist in love with the beauty of his muse. He played for beauty’s sake, and he composed for beauty’s sake.

Publicly premiered by the composer with Arthur Alexander, the Two Pieces Op 58 (circa 1940) date from the time of the Third Piano Concerto. Published by Augener of London in 1946, the first, Russian Round-Dance (A Tale), is dedicated to Edna Iles, ‘the bravest and ablest besieger of my musical fortresses’ (inscription on printed copy, 30 January 1946); the second, Knight Errant, to the legendary Russian-born duo partnership Vitya Vronsky and Victor Babin. ‘In September 1940 came the Battle of Britain’, remembered Iles (‘Medtner, friend and master’, Recorded Sound, Journal of the British Institute of Recorded Sound, April–July 1978):

Our home was bombed and we took refuge in a small country house a few miles outside Birmingham. We heard from the Medtners of their disrupted life and inability either to work or rest in the chaotic conditions and deafening noise of the raids. My parents invited them the join us in the country and they accepted. They brought with them their white cat Kotia, who was devoted to them … [Later] we removed to the picturesque village of Wootton Wawen in Warwickshire, six miles from Stratford-on-Avon … The house, known by the strange name of ‘Foreign Park’was situated in an isolated spot surrounded by woods and fields, with only one solitary shop a mile distant from us … All Medtner’s mornings were devoted to composition. After an afternoon rest and tea, he would walk with Mrs Medtner [Anna], and I often accompanied them. The wild flowers which grew in the woods among the silver birches were a source of delight to him. There were of course countless discussions about music, but he had many other interests besides, especially painting and architecture (he knew all the important picture galleries of the world, as well as the great cathedrals and churches); he was also interested in poetry, philosophy and astronomy. He told me how he had spent many nights in Russia observing the stars through his telescope. He was a profound thinker, and brought wisdom and penetration to bear on any subject under discussion, and on the problems of life in general. There were days when he was in a cheerful mood, when he could be humorous and whimsical, but there were also days when he was silent and depressed, grieved by the horrors and seeming endlessness of the war, or exhausted by his work. On our return he would continue composing until the evening meal, after which we took [a] book and read aloud, with Mrs Medtner listening and copying his manuscripts meanwhile … One day he gave me the first movement of his Third Concerto, saying it was the first time he had ever given part of a work before the whole was completed. I started learning it at once and in three weeks we were playing it together on two pianos. We were also playing the Round-Dance … Whenever he had visitors he wished me to play for them. The Round-Dance was invariably included, and no one could resist the charm of this work … He presented me with the original manuscript of the Third Concerto.

Recorded in 1946 for HMV by the composer with Moiseiwitsch, the Round-Dance in E major takes the form of a (loosely ternary) khorovod—a species of brisk Russian dance-song—inflected by phrases of Anglicized speech. Knight Errant, in C minor but with many tonal digressions, is larger-scaled (44 pages against 22), more profound in melody and (sonata) working-out, and more intricate in texture. Essentially fast—Allegro risoluto (sempre al rigore di tempo)—how its opening 4/4 idea grows directly out of the 3/4 theme of the slow introduction (Andante), and is the basis subsequently of an athletic 3/4 fugato, is characteristically Medtneresque. If either piece had a story, the author wasn’t telling. ‘None of his music’, Iles says, ‘was meant to portray any programme or story, but sometimes some legend or idea in his mind could suggest the mood of a work.’ ‘We do not create anything’, Medtner believed. ‘Everything already exists. We only discover.’

About his friend Rachmaninov, Medtner wrote:

It is precisely because of his fame that it is difficult to speak of Rachmaninov. This fame is more than his: it is the story of our art. This rare identification of his personal fame with our whole art is evidence of the authenticity of his inspiration … His value and power as pianist and conductor reside in his imagination, in his inner perception of the original musical image. His performance is always creative, always as if the composer were playing it, and always as if it were ‘for the first time’. He seems to be improvising, making a song not heard before … His own music’s chief themes are the themes of his life—not the facts of life, but the unique themes of an unique life.

it was with the essentially colourless and percussive piano sound that [Rachmaninov] wondrously created his most luminous images and sang his most impassioned songs. It is hardly suprising then that [he] could not resist the lure of magic inherent in the combination of two pianos. Four large works in this medium (the very early Russian Rhapsody, the Fantasy Op 5, the Second Suite Op 17, and finally the Symphonic Dances Op 45) attest to his lifelong search for ever greater refinement and enrichment of his means of expression in the tonal world of the piano. Like a great arch, these works span his creative life at its furthest points.

Posthumously published in 1948, the manuscript of the youthful two-movement folk Russian Rhapsody (Museum of Musical Culture, Moscow) is dated 12–14 January 1891. ‘Someone had told [Rachmaninov] that nothing could be written on a certain Russian theme’, remembered Alexander Goldenweiser, recalling the occasion of the first performance (autumn 1891). So

he wrote a composition in E minor (in the form of variations). It was quite good music. I remember that at some benefit [Moscow Conservatoire student] concert for ourselves—we often arranged such events—Rachmaninov and [Joseph] Lhevinne performed this piece on two pianos; it concluded with a variation in octaves, alternating from one pianist to the other … on that occasion each increased the tempo, and everyone watched to see who would outplay whom. Each had a phenomenal wrist, but it was Rachmaninov who won.

How reliable was Goldenweiser’s memory? Or was the original form of the music different? As eventually written/printed, the final (G major) variation provides for no accelerando. And, with the exception of three bars on the last page, all the octave work is confined to the first piano part.

Dedicated to Goldenweiser (later to become Director of the Moscow Conservatoire), the C major Suite No 2 was first heard in Moscow in November 1901, played by Rachmaninov and Alexander Siloti (his cousin and teacher). Emerging phoenix-like out of the depression of the fin de siècle years following the rejection of the D minor Symphony in 1897, it’s a work, according to Babin, that for Rachmaninov ‘always remained symbolic of the renewal of life’. Opening with a grandly rejuvenating chordal march gilded in bell sounds, two of its movements are dances—the first a G major waltz tableau of ‘fluttering eyelids’ and climactic E flat passion; the second an exhilarating tarantella finale in the minor, recalling a summer spent in Italy with Chaliapin. Physically full-bodied and full-blooded, it’s been accused of wanting in ‘notable profundity’ (Geoffrey Norris, 1976). And its links with the Second Concerto have been turned against it. No matter. Pianists will not be bothered. And listeners will not care. Dreams and poems, the sweetest of lingering hope, is the vision of its A flat Romance.

‘My last spark’, composed for Eugene Ormandy and the Philadelphia (Rachmaninov’s favourite American orchestra), the Symphonic Dances—a symphony in all but name, incorporating material from an unfinished ballet The Scythians, sketched in Russia in 1915—was originally planned as a triptych: ‘Noon’, ‘Twilight’, ‘Midnight’. Consistently, Rachmaninov refused to be drawn on its programmatic/spiritual/ emotional inspiration: echoing Medtner, ‘a composer’, he disappointed a reporter from the New York World-Telegram, ‘always has his own ideas of his works, but I do not believe he ever should reveal them. Each listener should find his own meaning in music’.

Compositionally, the two-piano version came first (completed 10 August 1940), the orchestration second (New York, 22 September–29 October)—which may help to explain, perhaps, why some ideas seem to function better pianistically than they do orchestrally.

Rachmaninov’s record company was less enlightened than Medtner’s. When he proposed to record the Symphonic Dances and Second Suite with Horowitz, RCA rejected the project. Extraordinary.